In adults, all biological processes exist in a state of equilibrium, and bone health and density are no different. However, the skeletal system is relatively slower at correcting, owing to the stability and rigidity of bone’s composition.

Adding new bone and removing old bone is a normal physiological process that occurs in all of us. When we need to add strength to a bone, cells called osteoblasts add new mineralization. 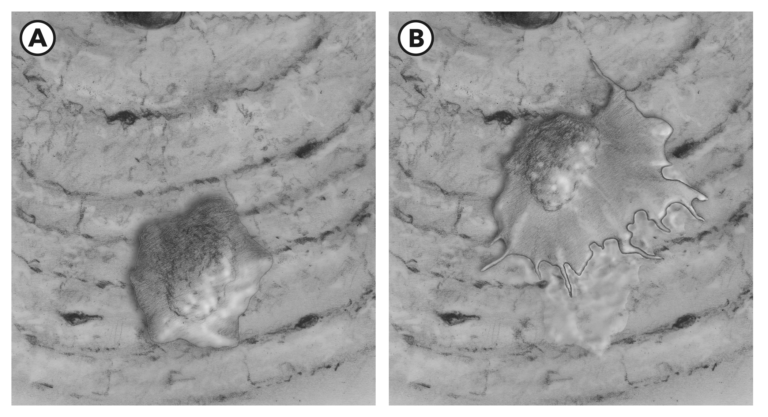 Figure 1A: An osteoblast sits on the bone surface in equilibria. 1B: When mechanical stress is increased and relevant chemical signals are present, the osteoblast spreads out over the bone surface, crawls along, and develops a new layer of bone mineral content (a lot like when a Zamboni applies a new thin layer of ice to a hockey rink).

When we need to remove old bone, cells called osteoclasts remove it through resorption. Resorption, a process much like acid etching, reduces the amount of minerals present in the bone. 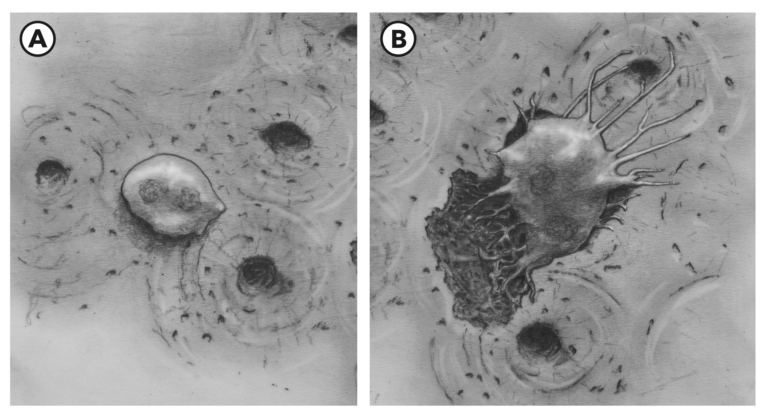 Figure 2A: An osteoclast sits on the surface of bone in equilibria. 2B: When mechanical stress is diminished and/or relevant chemical signals are present, the osteoclast spreads out over the bone surface, crawls along, and elaborates enzymes and other chemicals to degrade and remove bone mineral content, leaving a pitted surface behind.

Both types of cells are active all the time, performing a combined activity called bone remodeling, a process whereby bone is restructured to meet environmental demands.

When we load a bone with external resistance (for example, lifting a weight) and we repeat this activity over a long duration (months to years), the osteoblasts slowly add calcium, magnesium, manganese, and phosphorous to existing bone. Of these, calcium and phosphorous are particularly important, as they are key elements in hydroxyapatite, which comprises about 50 to 70% of human bone by volume. It is important to note that these mineral additions occur along lines of stress produced by the application of an external load. This is a very simple and well-established biological concept (2; 1).

Adult bone growth or increased density along these lines of stress is stimulated by the external load, causing a mild deformation in the bone mineral architecture. When bone crystals are bent under an external load, the piezoelectric effect takes place; in other words, an electrical charge forms (quartz crystal watches run on the piezoelectric effect). That charge stimulates bone cells to elaborate more bone materials to reinforce the bone’s architecture. 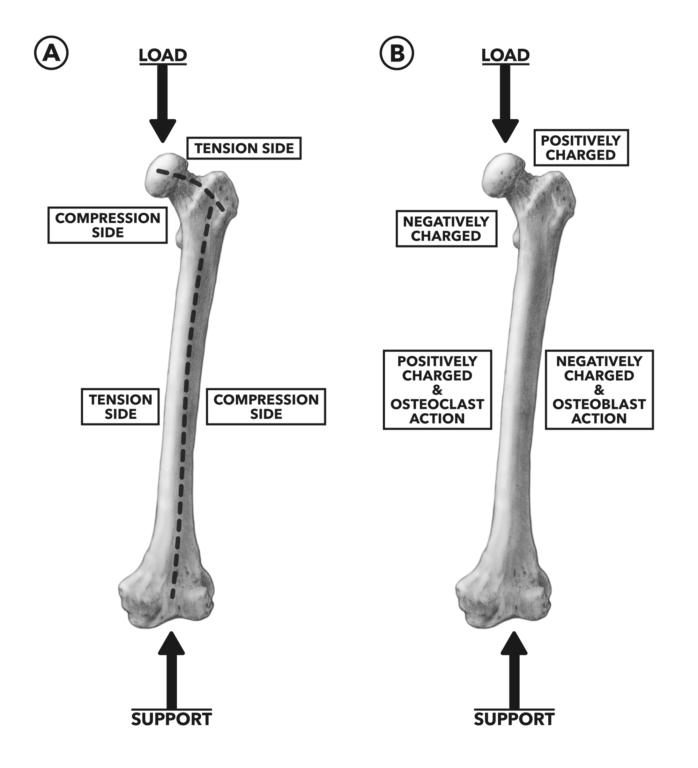 This microelectrical effect is part of a complex cascade of biochemical events that contribute to bone deposition. In response to external stimuli:

On the flip side of the coin, osteoclasts, also affected by the piezoelectric effect or unloading, do their work of removing bone materials in regions of reduced compressional stress. They shave away non-load-bearing bone at the same time osteoblasts deposit new material in the load-bearing part of the same bone — again, an equilibrium responsive to external demands. The mediating hormone active here is parathyroid hormone, which stimulates osteoclasts and inhibits osteoblasts (the opposite function of calcitonin).

But there are circumstances in which the balance between osteoblast and osteoclast activity can be destructive to bone health, the foremost of these being prolonged inactivity or a sedentary lifestyle.

If no external load is placed on the skeleton, osteoclast activity predominates. People who don’t move significantly may never experience a compressional load. In fact, modern life allows us to sit, lie down, or lean in ways that reduce longitudinal loading of the skeleton. That means the external stress on a sedentary person’s skeleton is reduced on a daily and prolonged basis and the direction of applied stress is inconsistent. For example, if you sit rather than stand, the amount of weight carried on the lower appendages is at a minimum halved, and the direction of stress application changes by roughly 90 degrees (if you sit vertically). Prolonged and habitual reduction of skeletal loading sets up a preventable pathology: osteoporosis.

Osteoporosis is a disease in which loss of bone mineral content leads to a weakening of the microarchitecture of bone, making it susceptible to fracture from external forces. Think of it as porous bones (osteo = bone, porosis = more porous). Normal bone is much like limestone, a substance strong enough to serve as building material for huge structures. Conversely, diseased, extremely osteoporotic bone is much like blackboard chalk and easy to break.

Beyond simple loss of mineral content, the first stage of this pathology is osteopenia, the loss of active bone cells. This loss of cells that can produce new bone and repair damaged bone correlates well with the cessation of weight-bearing activity (i.e., the adoption of a sedentary lifestyle). Osteoporosis affects approximately 25% of the female and 5% of the male population over 65 years of age. It is not solely a problem of the aged. The Centers for Disease Control and Prevention indicate most members of the general population over 40 years of age have reduced bone mineral density. The advanced effects of osteoporosis are profound and extremely hard to recover from. Unfortunately, by the time a physical problem manifests, the bone damage is significant and often debilitating. 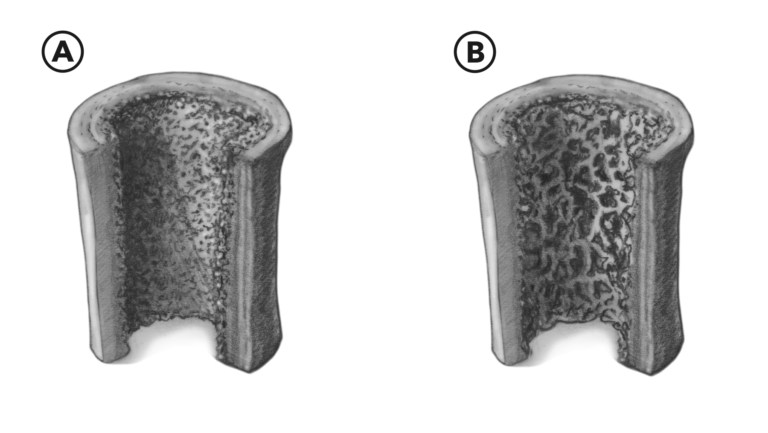 Figure 4A: In normal bone, the internal scaffolding occupying the center is dense and hard. 4B: Osteoporotic and osteopenic bone scaffolding is more porous and fragile. Note the increased amount of negative space.

Osteoporosis imposes significant expense on private and publicly funded health-care systems, with an annual cost of direct medical treatment near $15 billion. And there are many additional costs beyond the financial burden: reduced quality of life, depression, loss of mobility, loss of independence, and mortality. In geriatrics, falling and fracturing an osteoporotic hip or femur often means not leaving the hospital again or being forced, permanently, into a long-term care facility.

While osteoporosis is generally not identified until physical health has deteriorated, there are things we can do to guard against its development. The simplest solution is one that, historically, most people have not wanted to hear: loaded exercise. There is a strong correlation between hip strength, lean muscle mass in the hip, and the absence of osteoporosis (3). Lifting weights can combat osteoporosis, and for those with the disease, it can help slow progression and even recover some lost mineralization.

Other forms of exercise can help maintain bone density. However, the excessive catabolic cost of long-distance running, the unloading effects of swimming and cycling, as well as all the let’s-make-exercise-easy gimmicks cannot produce an adaptive environment that allows for the maintenance and reinforcement of bone architecture (4).