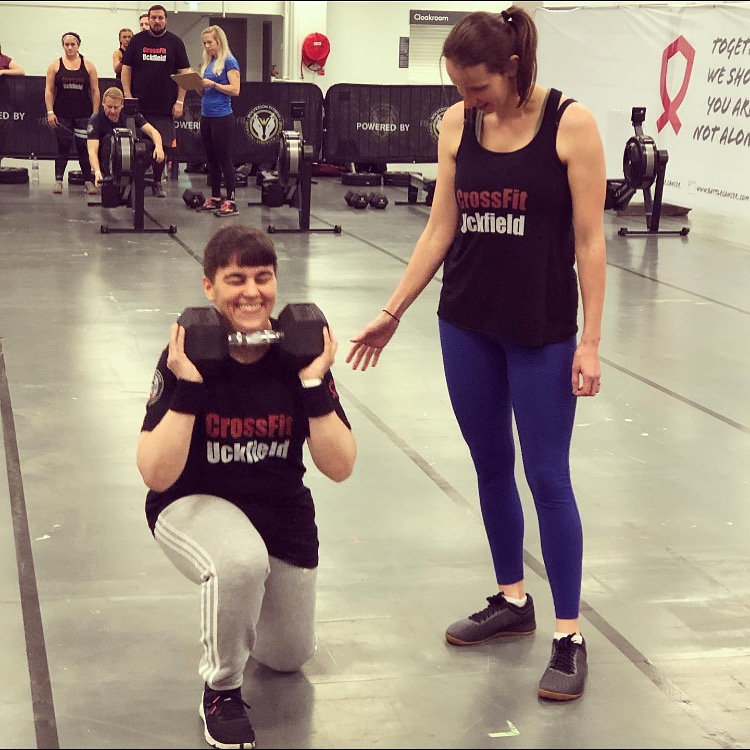 Bex Kenton grew up in the U.K. countryside, playing sports and games with her two younger brothers and surrounded by “dogs and cats galore,” according to her brother Matt. The fact that Kenton had severely blurred vision in her right eye, was blind in her left eye, and was born with nystagmus — a condition that causes involuntary eye movements and affects depth perception, balance, and coordination — did nothing to slow the young athlete down.

Unfortunately, a slowdown did come years later, brought on by a series of challenging life experiences and limited access to a motivating fitness environment. It took finding CrossFit for Kenton to finally shake off those external forces that were dragging her down and return to her old self again.

“We used to roller skate together around where we lived … (and) play football in the back garden,” Kenton explained.

When Kenton and her siblings weren’t playing sports, they were watching them on T.V.

“There was always sports on the T.V. There wasn’t really much else,” she said. “There was the Olympics, Paralympics, Commonwealth Games, London Marathon. We’d all watch it all, really.”

Kenton carried her love of sports with her when she left home for boarding school at 16.

“I moved off to a residential college for the blind, and, well, I did blind sports like football and a sport called goalball,” she explained.

Goalball, a sport that pits two teams of three visually impaired athletes against each other, was created in 1946 and became a Paralympic Games sport 30 years later. Players face off on a volleyball court over 10- to 12-minute halves and respond to audible cues from bells on a ball to score goals and defend their team’s goal from attack.

While away at school, Kenton also enjoyed being active outdoors.

“I got to go and do rock climbing, abseiling, all outdoor sports, so that was quite fun,” she said.

From Tipping Point to Turning Point 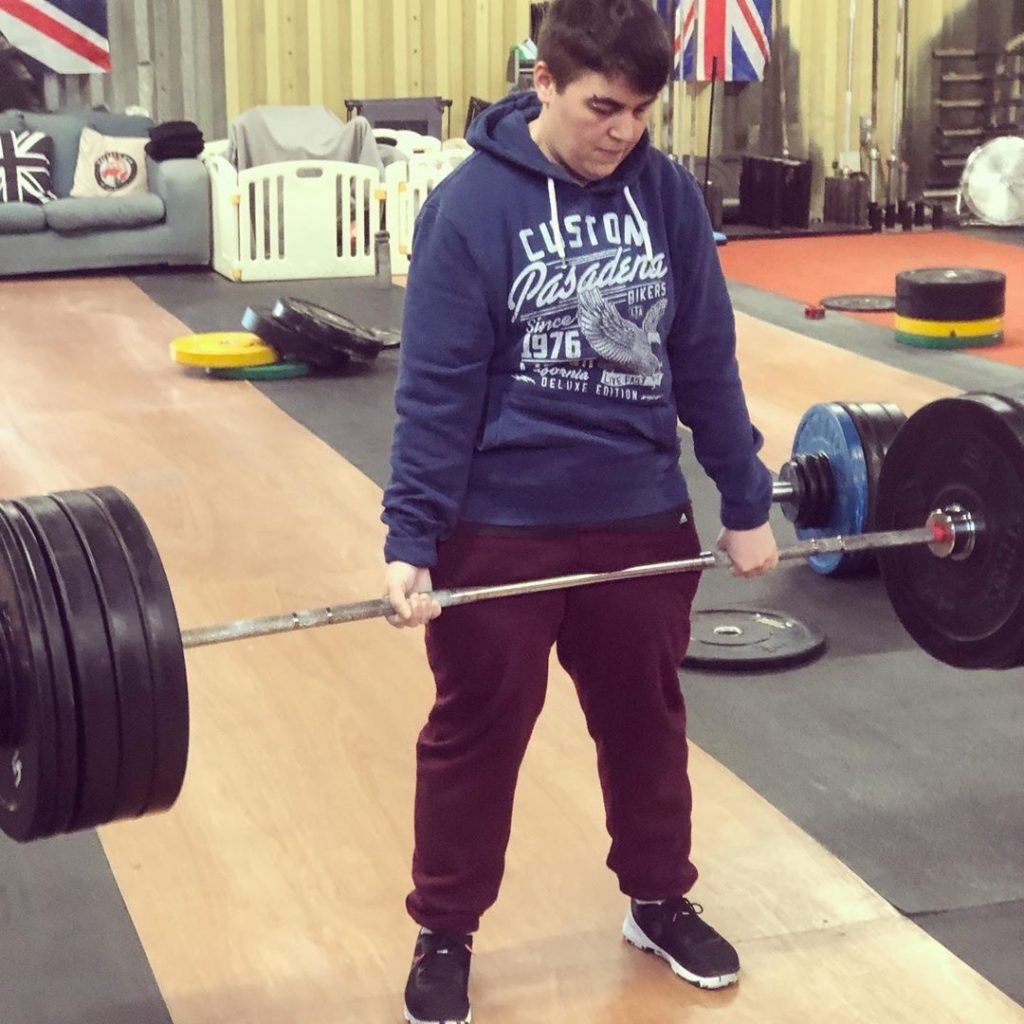 Kenton had deeper stores of self-motivation than most teens when it came to looking after her physical fitness, but even she found there were limits.

“I’d been going to a regular gym since I was 14 … and it just became repetitive and boring,” she said, adding, “There’s not much I can do in a regular gym because … it’s all touch screen now.”

The challenges of finding accessible equipment and workouts in the regular gym were compounded by personal tragedy that further sapped her of motivation.

“When a family member got cancer and was ill, I stopped going to the gym just because I just had no motivation anymore,” she explained. “I had a year out of the gym not doing anything after our granddad died, and then after that, a close friend of mine committed suicide. So for a year … I had no motivation to go to a gym.”

When she did muster the energy to go, the gyms she visited weren’t always accommodating.

“I visited a couple of gyms, but one of them didn’t want my guide dog there, so I abandoned that idea. I just got to a point where I didn’t know what I was doing or what was the point,” she said.

“I’m so used to negative people … on the street, out and about, and in a regular gym,” she said.

In the gym, especially, “You just have people in their own world, on their headphones, looking in the mirror, or just staring at you. And even though I can’t see that they’re staring at me, it’s just that kind of awkward atmosphere, and you just have to get on with your own thing — and if you have no motivation, then there’s no point in you being there.”

The turning point didn’t come until she was scrolling through Facebook one day and discovered a photo of a friend doing CrossFit.

Not a “Regular Gym” 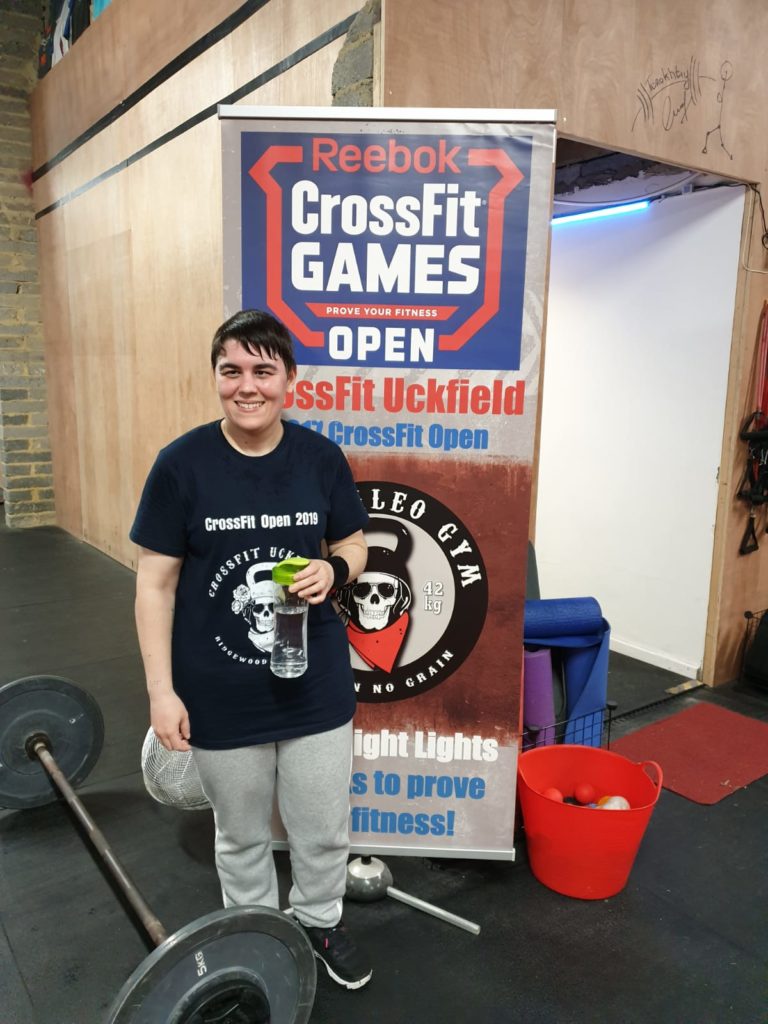 Interested in giving this CrossFit thing a try, Kenton decided to take a leap and reach out to her local affiliate, CrossFit Uckfield.

“I knew I was going to be taking a risk, because I knew that it could be somewhere where, you know, disabled people wouldn’t be accepted or it couldn’t be adapted for me … just like other regular gyms,” she said.

Instead of the negativity she expected, Kenton was in for a pleasant surprise from affiliate owner and head coach Krish Stevens.

“When I got the response back, I didn’t actually expect it, because she was like, ‘Yeah, come down and see what we can do for you,’” Kenton said.

“From the moment I did my intro, I knew I wanted to join,” she said. “For the first time I smiled in a long time, because it was the first place that completely was like, ‘Yeah, we can do everything.’”

Kenton’s intro consisted of a modified version of the Hero workout Johnson, a 20-minute AMRAP of 245-lb. deadlifts, muscle-ups, and 155-lb. squat cleans — a workout many of even the most seasoned CrossFit athletes might find daunting. But not Kenton. She found the challenge invigorating.

Kenton recalled, “Even on my first day, I had like 30 seconds left, and one of the guys in the gym said, ‘Shall we go on? You’re nearly there. Get a couple more reps in.’ And I was laying on the floor at the time absolutely dying. I jumped up and got 2 more reps in. … I’ve never been cheered on to do it before.”

One month after joining the gym, Kenton had signed up for the 2018 CrossFit Open.

“I couldn’t really do anything,” Kenton explained, “but my coach would go around and tell the new people, ‘Everyone, you have to do the Open. You have to do the Open. It’s amazing. Anyone can do it. Everything can be scaled. Friday Night Lights is something that you should come to. It’s fun. Everybody will cheer you on.’”

The experience must have been a good one, because Kenton ended up signing up again in 2019, 2020, and 2021 — and she no longer can say she can’t really do anything.

Making the Effort To Be Accessible 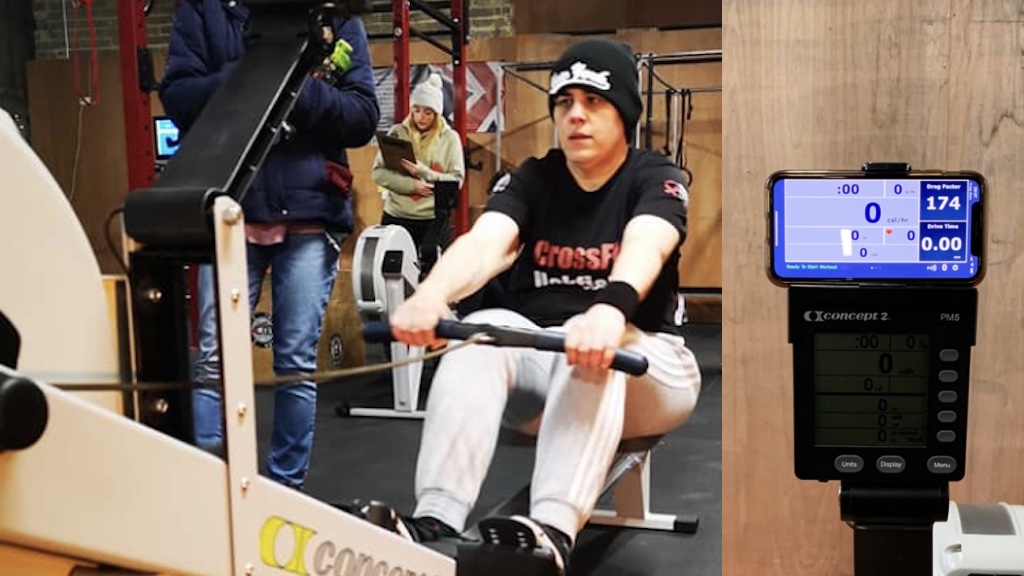 From Kenton’s first session, Coach Krish and the rest of the crew at CrossFit Uckfield have found ways to ensure Kenton can get the coaching and workout support she needs to thrive.

Kenton also recalled a creative way the coaches helped her with her jerk.

“I did split jerks for the first time, which I couldn’t do in my first year because of balance,” she said. “One of the coaches, Russ, came up with an idea of putting a yellow band on a ring so that I would look forward, because I automatically look down, so I’d fall over.”

Additionally, the coaches outlined all the dark equipment that posed a hazard to Kenton as she was navigating the gym — black rubber plates, handles on bikes, etc. — in bright yellow tape. They purchased an audible clock. They also adapted a rower so Kenton could use all the features on her own.

The rower is synced with an app that “uses Bluetooth … to speak time, distance, and calories,” Kenton explained. “Apart from the odd occasion, I can just jump on and I don’t need anyone reading the screen for me.”

These efforts by the coaching team have made a huge difference in Kenton’s experience at the gym.

“They’re just very creative finding ways to adapt the gym so that it’s a safe place and I can just kind of walk around and find stuff,” she said.

The Difference an Accessible Gym Makes

Kenton has experienced a slew of tangible and intangible transformations since walking into CrossFit Uckfield in 2018.

“I’ve lost nearly six stone (84 lb.), so everything physical really has kind of changed, and health-wise, everything has changed,” Kenton said. “I have asthma … (and) that improved massively as well.”

“You kind of notice the more physical (things), apart from walking the dog and daily activities, which are a lot easier, you know, like bending down, squatting down to get your washing out of the washing machine — you do notice those things, but I also notice it inside the gym as well as outside,” she added.

For Kenton, though, the less visible changes are the ones that matter most.

“The biggest thing that changed was my mental health all together,” Kenton said.

She noted she experienced a confidence boost by being on a level playing field with the other athletes in the gym.

“Even if you couldn’t do a pull-up or you can’t do a handstand … some people can and some people can’t,” she explained. “I wasn’t the only one that couldn’t do something. When I was at school, I just had to kind of sit out, whereas now I get to join in like everyone else. So that changed my mental health massively.”

“From all those sports days that I just had to sit there and watch all the other people …  now every day at the CrossFit gym is like a sports day,” she added.

A Word of Encouragement to Others 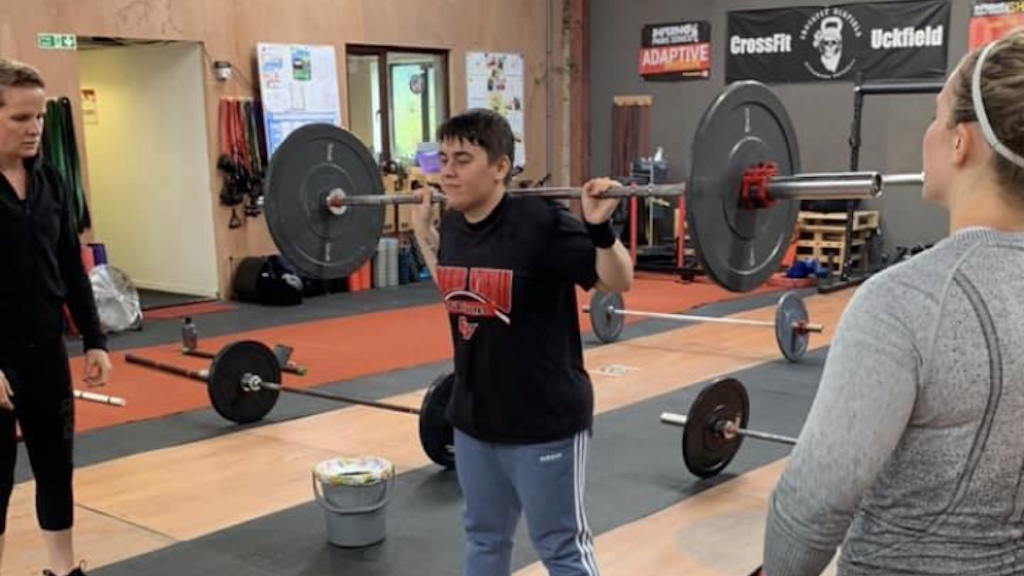 “I think when you’re … in a very low place, and you don’t really have any support, and you’re very isolated from the world, I think that when you go to a CrossFit box and you have people that are positive, that encourage you … I think it is just a hub of positivity,” Kenton said.

CrossFit, Kenton said, is able to extend a uniquely accessible service to athletes at all levels and with various impairments.

“I think it’s really important for visually impaired people, especially because we struggle so much with regular gyms, whereas CrossFit gyms are completely accessible,” Kenton explained. “It’s the only place that I’ve completely felt that is accessible to me.”

Since getting started, Kenton has also inspired others to join.

“Our mom used to do cross-country running as a child, and now she does CrossFit,” Kenton said. “She basically saw the change for me, giving up and just not knowing what to do or where to go and not having any motivation to going to a CrossFit gym … and then for the next couple of months, she was just getting the CrossFit itch.”

After seeing Kenton smile for the first time in a long time, she decided to try CrossFit as well.

“I think everybody should try,” Kenton said. “It makes you feel a lot better to go.”

All photos courtesy of Bex Kenton