In this study published in the February 2019 issue of The Journal of Physiology, a research team from the University of Queensland investigated exercise’s known effect on mortality rates for cancer survivors by observing male colon cancer survivors’ blood cytokine levels during a month of high-intensity interval exercise (HIIE). Their conclusions were:

The study followed 20 male colon cancer survivors who were split into two groups. Ten men were prescribed a brief, strenuous workout regimen: four minutes of hard cycling, three minutes of rest, repeated four times, three days per week. The subjects did this course of exercise for one month. The other 10 did a single exercise session of the same program.

The researchers took blood from these subjects before, immediately after, and two hours after an exercise session, then incubated cancer cells with the blood. The blood drawn immediately after exercise showed higher cytokine levels (i.e., inflammatory markers, including IL-6 and TNF-a), which subsided within two hours. This same cytokine-rich blood also suppressed tumor growth. There was no difference in the magnitude of this effect (either the cytokine elevation or the tumor growth suppression) in subjects who did a single HIIE session and those who had done three sessions per week over four weeks. 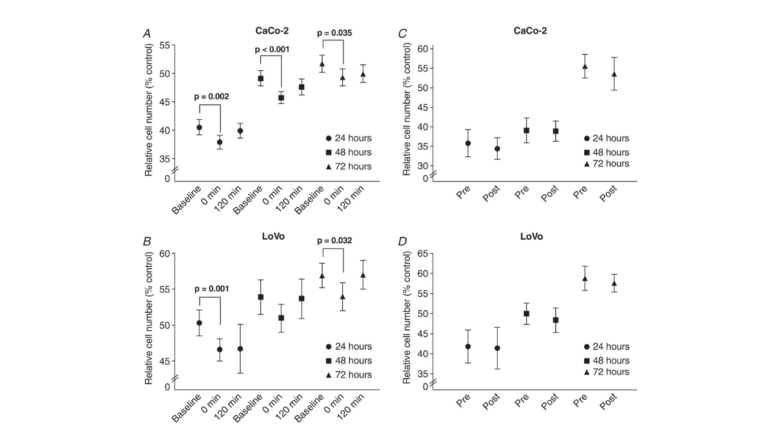 These data suggest exercise temporarily increases levels of blood inflammatory markers, and these increases may suppress tumor growth. The authors note that while a single bout of exercise is unlikely to meaningfully impact tumor growth, a long-term exercise program that repetitively induces cytokine elevation may improve cancer prognosis. This beneficial inflammatory effect could explain the widely observed benefits of exercise on cancer risk and prognosis.