CrossFit | "What's With All the Flags?": Finding Purpose at Flambeaux CrossFit 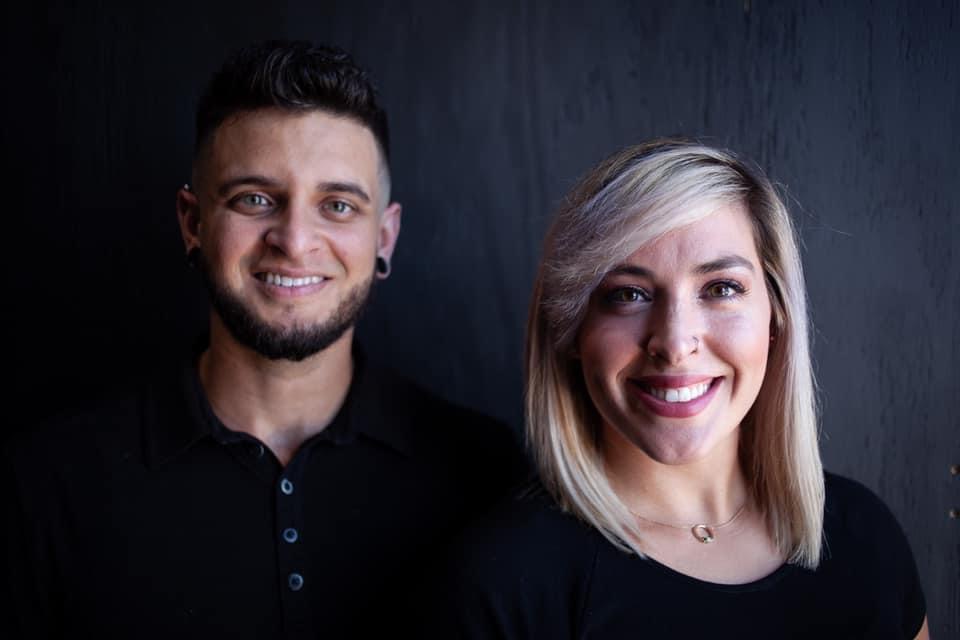 “We’ve had members quit,” Dillon King said. “You know, we’ve had trials come, and they’re like, ‘What’s with all the flags?’ And I’m like, ‘Well, everybody is welcome here.’ And maybe they don’t sign up, but there’s someone who needs me more than that guy or girl … and I’m going to be the only place they feel comfortable. So I’m here for them.”

King and his wife, Missy, are affiliate owners and coaches at Flambeaux Fit, or Flambeaux CrossFit, just outside New Orleans in Metairie, Louisiana.

“We’re in a little bit more — voting-wise — a conservative area,” Dillon explained. “Like, no one cares what their neighbor’s doing, but they’re going to vote and financially support more conservative views around us.”

Though Dillon and Missy are firm in their stance on inclusivity at their gym, Dillon recalls questioning his openness about his own experiences when a longtime member stopped coming to the gym after learning he is transgender.

“She was a regular. She was there every day, 6 a.m. — sometimes even on Saturdays,” he said.

Dillon had to do some soul searching after that. He has a wife and two kids to take care of, so financial stability is top of mind.

“I’m not sitting here saying I’m ever going to be wealthy, but I want to support my family,” he explained. 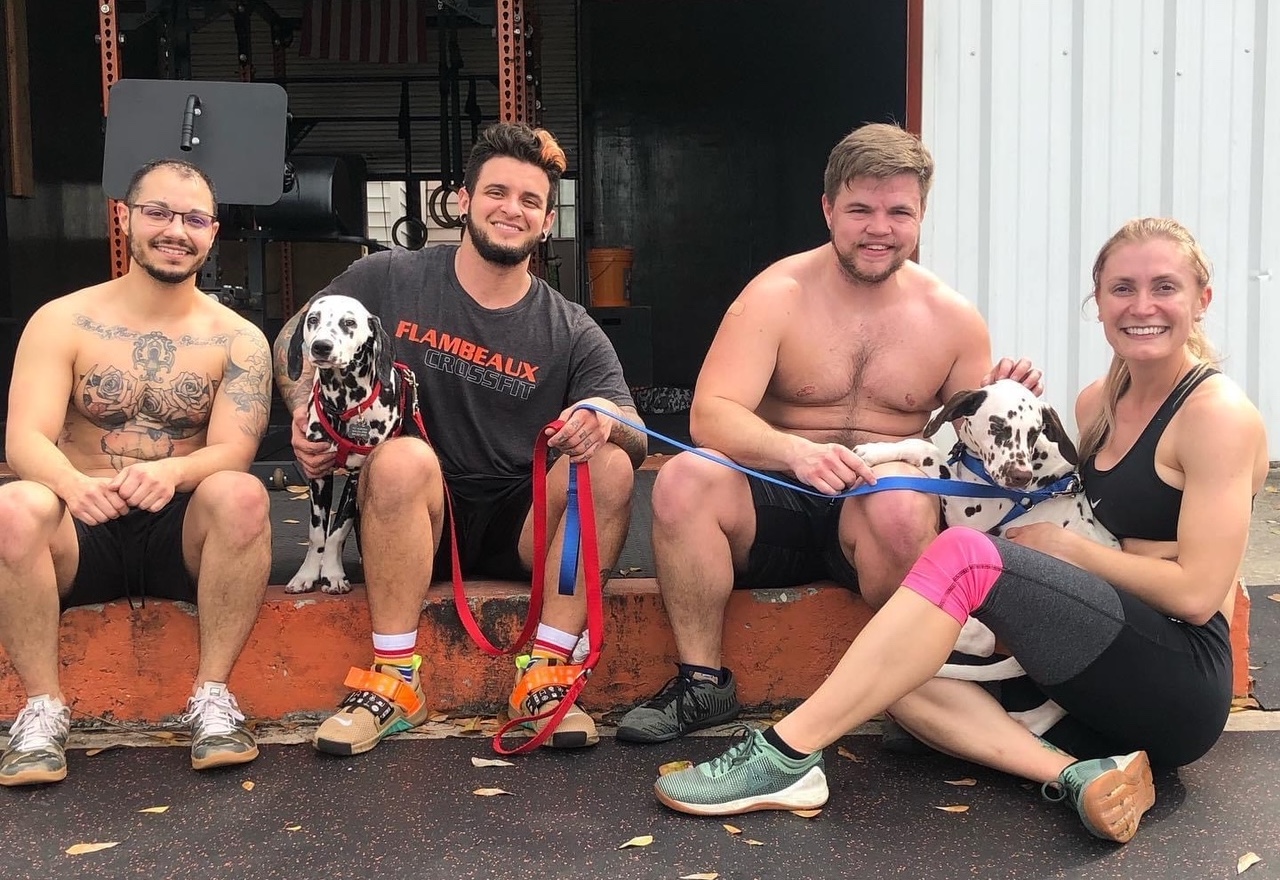 Dillon sits with a few of the members of Flambeaux

At the time, he and Missy had some deep conversations, and he recalls wondering, “Do I hide a little bit, that way we get the revenue?”

“It was hard,” he said. “We kind of couldn’t believe we were even debating this.”

In the end, the two came to a decision: “These are our morals,” Dillon said. “This is why we got started. … We have to stay true to our causes and the people we want to serve, and even if it takes us twice as long to build, we will sleep good at night. … This feels like our purpose.” 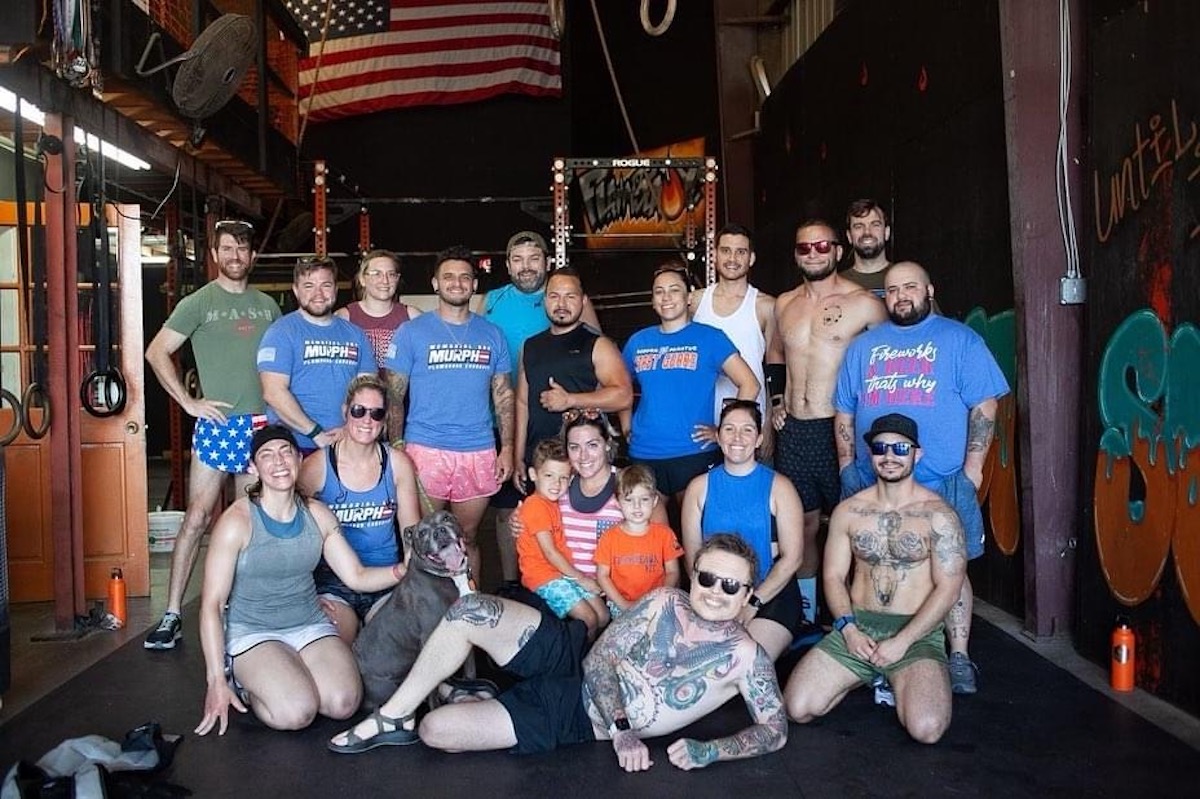 The Journey to Self-Discovery

“So I’m transgender. I was born female,” Dillon said. “Growing up was really difficult, and I had a lot of bad bouts of depression.”

Dillon explained that he was on anti-anxiety medication and antidepressants beginning in seventh grade.

“I came out as a lesbian in high school and then dealt with being kicked out of my house and allowed back in, back and forth,” he said.

“It really wasn’t until I found fitness did I find a healthy outlet,” he continued. “That was just a really good way for me to focus on something that was about myself and made me feel better about myself.”

There were limits to the body positivity he could experience in the gym at first, however.

As Dillon got fitter, he realized something: “It also pointed out to me that no matter what I did in fitness, I never saw what I wanted to see, and that’s when I started realizing … maybe something goes a little bit beyond me being LGBT or just a depressed person,” he said. “That’s when I kind of started trying to figure out myself more.”

And eventually Dillon had an epiphany: “OK, I’m trans. This is a real thing.”

“I was at my first CrossFit gym when I really came to,” he said.

From Self-Acceptance to Support for Others 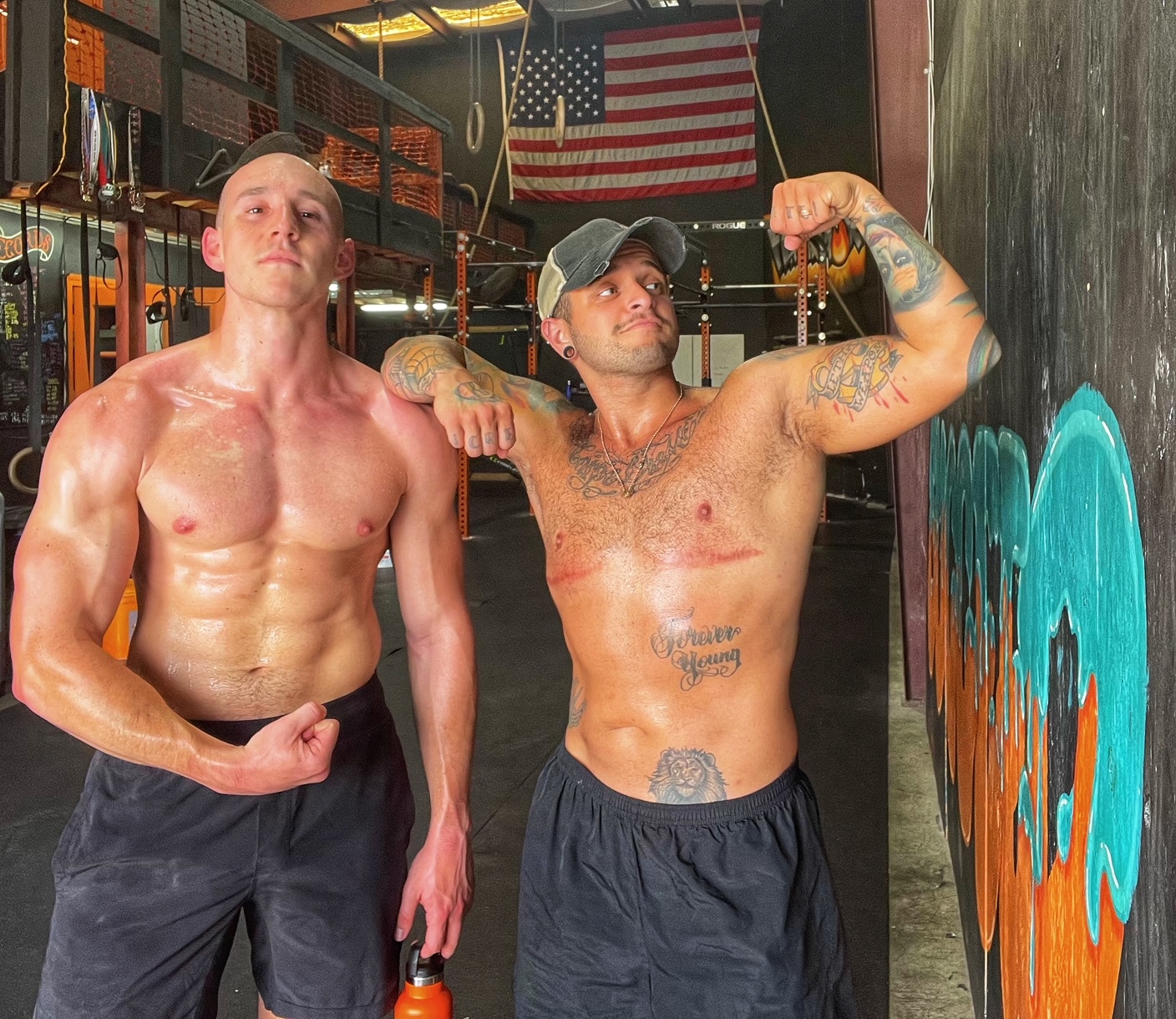 Dillon recalled the response from the CrossFit community when he decided to transition: “The community really embraced me and allowed me to switch over,” he said.

“That’s really where my passion came from. It really pulled me out of depression and gave me confidence that I never ever ever thought I could have — through CrossFit,” he explained.

At that point, Dillon decided to make a career of it. He started personal training and later decided to open his own gym with Missy.

He saw his own experiences reflected in the athletes he was training.

“I just saw that it wasn’t just me,” he said. “It was helping everybody who was willing to walk in the gym and put in the work. It helped them also.”

What Can You Do to Create an Inclusive Space?

Dillon shared a few things people can do to create an inclusive space and support the LGBTQ+ people in their community.

Calling the barbells “the 45” and “the 35” instead of men’s and women’s bars “goes into our allyship,” he explained.

The same goes for the prescribed workout weights.

At Flambeaux CrossFit, Dillon and Missy opt to base workout prescriptions on an athlete’s body weight or their 1-rep max. 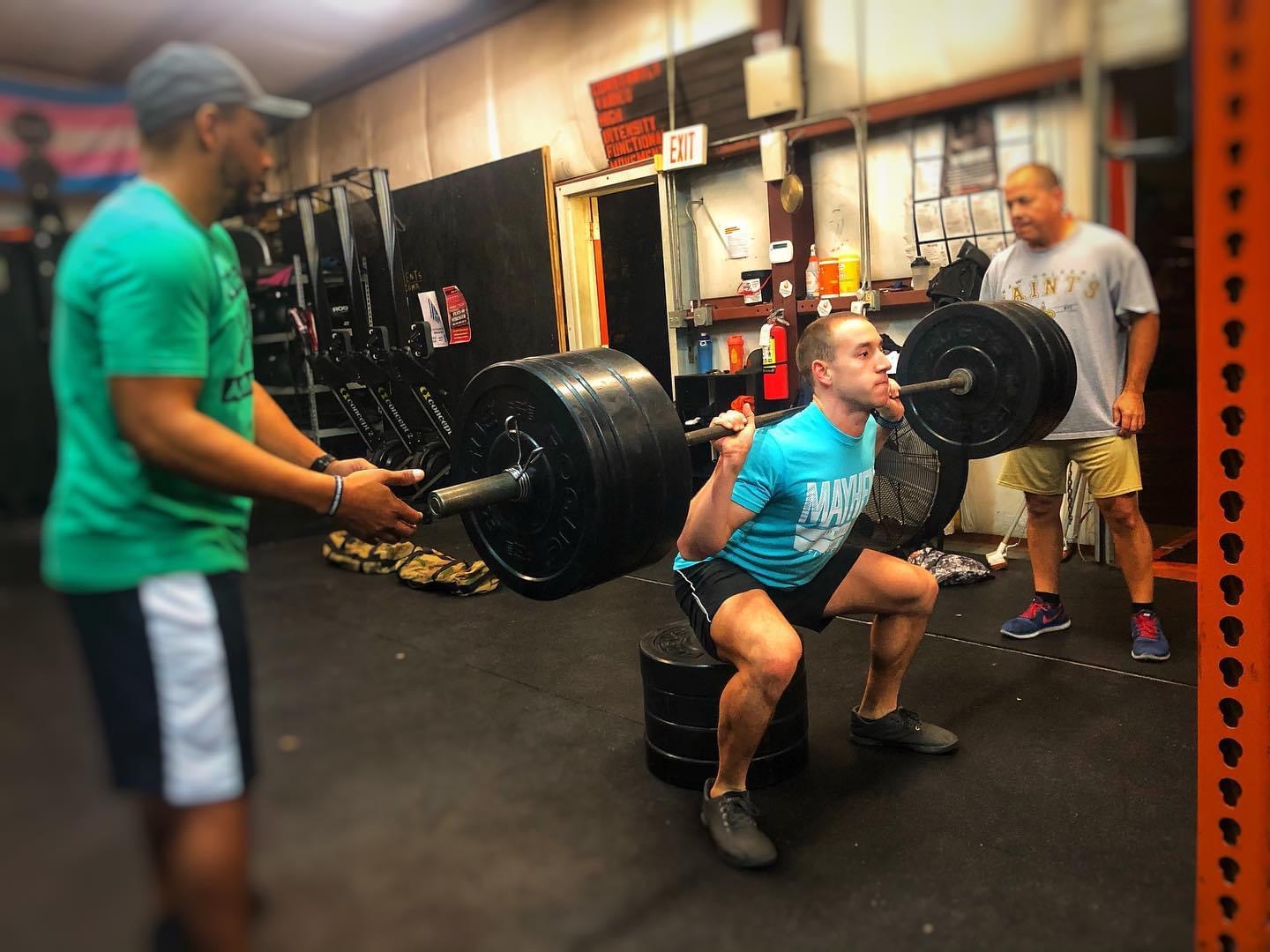 “Our verbiage … can be important,” Dillon said.

This is true of pronoun usage, too.

Dillon includes his pronouns in his email signature and recommends that even cisgendered people do it, because “that tells everybody who I’m responding to … that I recognize that this is a thing.”

“If you want to be an inclusive gym … it’s that type of thing that is there for the people who need it,” he said. “And the straight, heterosexual people who feel like they don’t need it will just kind of nudge it off.”

“It’s welcoming those who you want to make sure feel welcome,” he added.

Being welcoming in general is another tip that promotes inclusivity, Dillon explained. 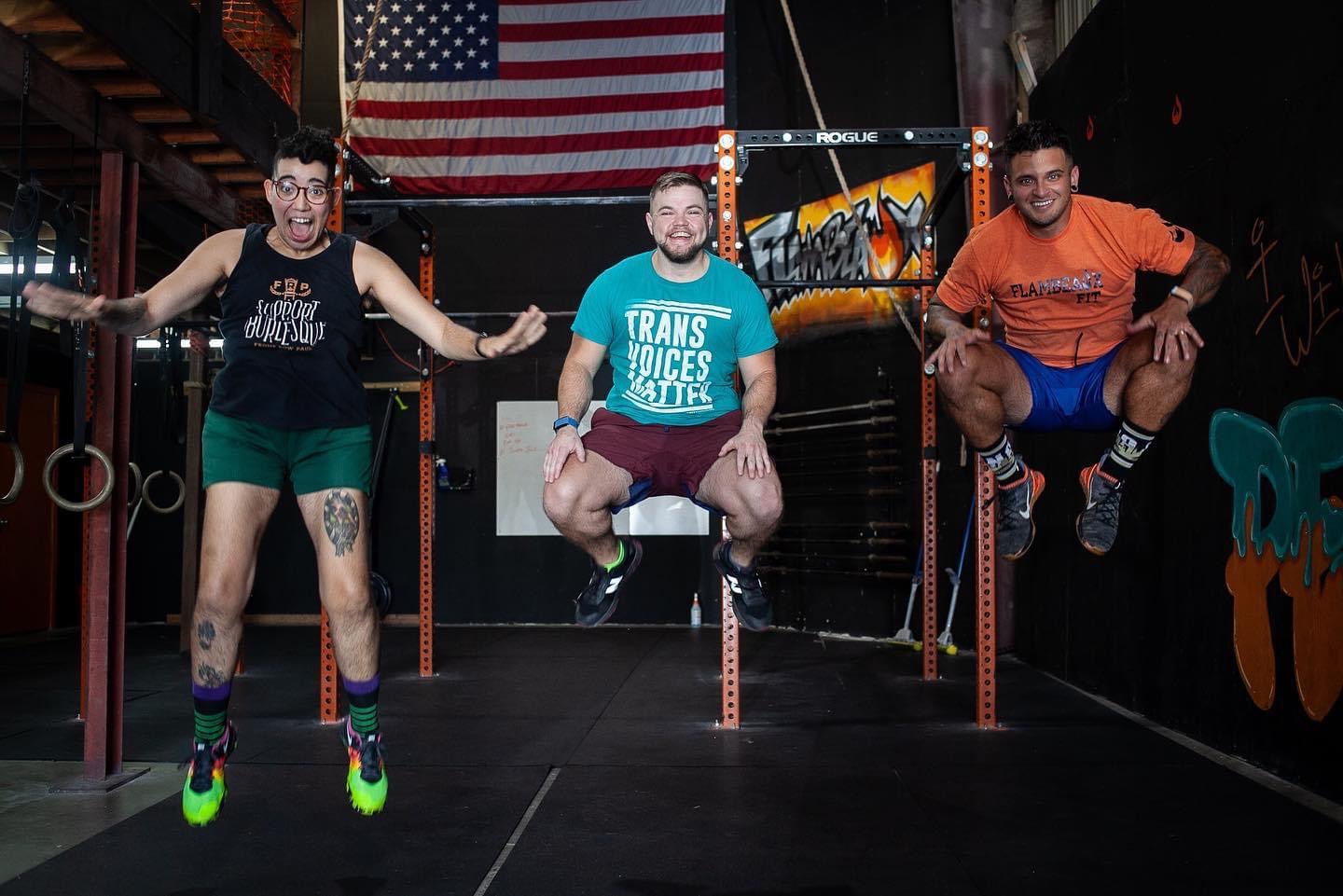 “It’s really scary when you walk into a gym and you feel the vibe as soon as you walk in, but you’ve already signed up for that free trial, and you’ve already walked through that door, and you’re like, ‘I just gotta get through the next hour,’” he said. “Until you’re part of that disparitied community, it’s hard to explain what that uncomfortable feeling is like.”

His recommendations: Talk to people. Be friendly. Welcome them into the gym and “treat everyone like they’re already a member, like they’re part of the community.”

“We’re still not the largest and most revenued gym,” he said. “But we are such a happy gym.” 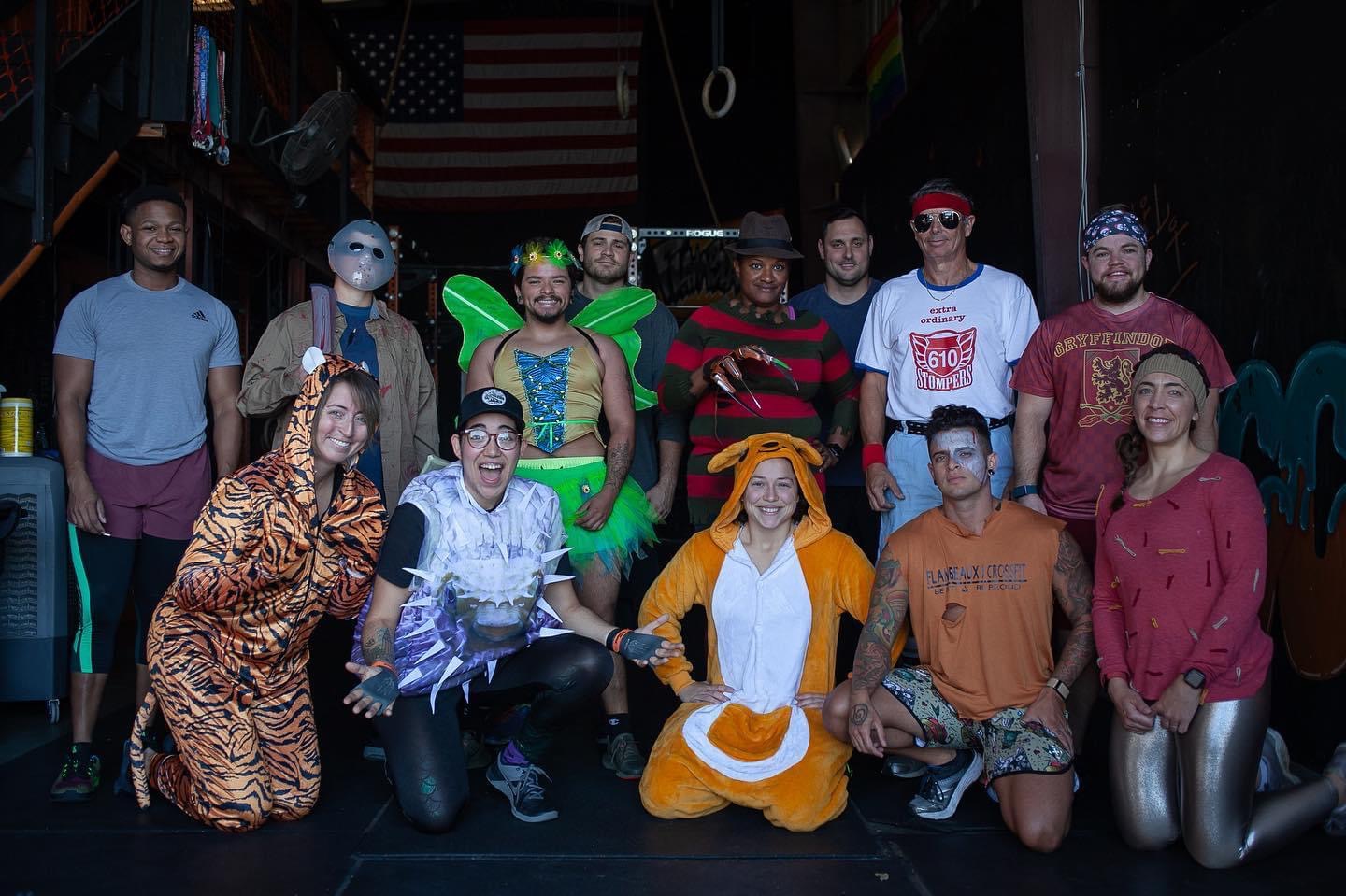 Resources for LGBTQ+ Athletes and Allies

The OUT Foundation offers a number of resources for athletes and allies on its “Diversity, Equity, and Inclusion” page.

Athletes who are seeking an inclusive gym to join or visit while traveling can make use of the inclusive gym finder on The OUT Foundation’s website.

Executive Director of The OUT Foundation Eddie Plata and Founder and Chief Mission Officer Will Lanier note affiliate owners who are interested in being added to the inclusive gym finder can volunteer to host a fundraising event for their local LGBTQ+ community. Alternatively, they can contact The OUT Foundation about the requirements and application process through the self-report feature on the site.

For athletes seeking inclusive gyms, Dillon also recommends joining an LGBTQ+ CrossFit group on Facebook. There, other members of the community can share tips about inclusive gyms and supportive coaches.

Plata and Lanier also recommend that anyone who is interested in supporting LGBTQ+ athletes in their community check and see if there is already a local chapter of The OUT Foundation holding events locally. Or, if no chapters are nearby, apply to start one.

Plata and Lanier reiterated many of Dillon’s recommendations: using weights instead of gendered terms when referring to barbells and normalizing the sharing of pronouns. They also note that adding a rainbow flag to your gym decor or front window can be a strong gesture of inclusivity.

“There’s so many small cues,” Plata said. “Like, if your gym makes a Pride shirt.”

Lanier added that having an all-gender bathroom can make a big difference, too.

“It’s small things,” Lanier added. “There’s so many nonverbal cues to our community that make us feel safe.”

All photos courtesy of Dillon King and Flambeaux CrossFit.