Perhaps the main objection to the response to injury hypothesis is the observation that atherosclerotic plaques are seen to contain a high concentration of both cholesterol and low-density lipoprotein molecules. These plaques also are believed to start life as what are commonly known as “fatty streaks” — small white streaks just beneath the surface of endothelium.

It therefore seems unquestionable that fat(s) and cholesterol must be the factors responsible for the development of atherosclerosis: They are absorbed into the artery, creating the fatty streak, and then go on to cause a gradual buildup of plaque.

However, the cause of this observation is not in any way clearcut. In fact, when analyzed more closely, the observation contradicts the cholesterol hypothesis rather than supporting it.

It is almost universally believed that atherosclerotic plaques begin as fatty streaks that gradually enlarge.

Elspeth Smith writes, “Juvenile-type fatty streaks are the earliest lesions that can be recognized by macroscopic inspection of aortas of children … and Holman reported that they were already present in all children aged more than 3, increased in area rapidly between ages 8–15, and reached a maximum at about age 20” (1, p. 45).

However, the accepted progression from fatty streak to plaque has never been proven. A problem here is that it is not possible to accurately track the development of plaques in any individual, particularly early stage plaques. Fatty streaks, for example, can only be visualized post-mortem.

Animal models are also problematic because humans are the only animal known to spontaneously develop significant atherosclerosis. For example, chimpanzees are our closest genetic relatives, yet they do not develop atherosclerotic plaques, despite having LDL cholesterol levels that are higher than those found in most humans

As Nissi Varki et al. explain, “First, we can see that the mean total serum cholesterol in this captive chimpanzee population is well above the mean in the human population, at every decade of life, in both males and females” (2).

They continue: “Although mild to moderate atherosclerosis was observed in the aorta and other major blood vessels in some of the chimpanzee necropsies, no major blockages of the coronary arteries were observed in any case” (2).

The lack of a valid animal model makes it difficult to extrapolate from animal studies to humans. Therefore, it has only ever been assumed that fatty streaks gradually evolve into atherosclerotic plaques. When studied over many years, this process has not been supported by the evidence.

Smith writes, “For many years it was widely believed that [fatty streaks] were the precursors of fibrous plaques … . However, there is now evidence from many different sources that suggests that fatty streaks and fibrous plaques develop by separate and independent pathways” (1, p. 45).

It seems that fatty streaks are an almost universal finding, appearing in all children by the age of three — this despite young children having no risk factors for cardiovascular disease (CVD) and having very low cholesterol levels.

In fact, fatty streaks do not become atherosclerotic plaques. These develop in a completely different way.

Cholesterol was first observed to be present in plaques by Rudolf Virchow in 1852. He did not believe cholesterol caused the plaque; however, his finding was instrumental in directing later research in the direction of cholesterol as the causal agent.

It is unclear exactly what Virchow was observing at the time, but most likely, he noted the presence of cholesterol crystals, which are obvious under a microscope. 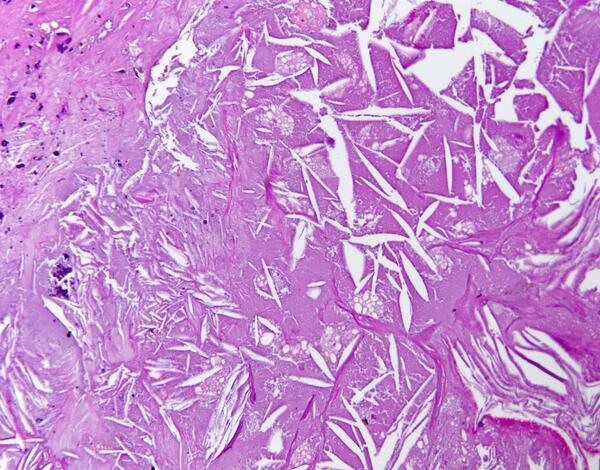 Clearly, the cholesterol that formed into these crystals must have come from somewhere, and the most obvious source would be the cholesterol carried in low-density lipoproteins (LDL).

Again, this led to a simple yet erroneous idea that an increased cholesterol (LDL) level was almost certainly the primary cause of plaques. At a basic level, it was possible to ask, “Where else could this cholesterol have come from?”

Significantly, however, the cholesterol carried within LDLs is almost entirely esterified. That is, it is made up of a cholesterol molecule linked to a fatty acid molecule. This is the form in which cholesterol is absorbed from the gut and then moved around the body in the bloodstream — within LDL.

As G. Pasterkamp and R. Virmani write, “About 40% of the weight of the erythrocyte (red blood cell) is composed of lipid. The red cell membrane is comprised of a cholesterol rich phospholipid bilayer. Cholesterol is intercalated between the phospholipid molecules” (3).

This free cholesterol can then be found in plaques.

As with fatty streaks, an assumption has been made that is not supported by the evidence. In this case the assumption is that the cholesterol found in plaques must have been derived from the primary cholesterol-carrying lipoprotein in the blood, the low-density lipoprotein (LDL). However, this assumption cannot be supported by a more accurate analysis of plaque structure.

This area is complex. The first issue here is that lipoprotein comes in two forms: LDL and lipoprotein (a) or Lp(a). They have exactly the same basic structure. The only difference is Lp(a) has an additional protein attached to it called apolipoprotein (a).

The LDL concentration in the blood is normally much higher than the Lp(a) concentration, by a ratio of around five or six to one. However, some individuals have very high Lp(a) levels that can exceed their LDL. Despite the lower concentration, Lp(a) is a powerful and independent risk factor for CVD.

While there is debate about the function of Lp(a), it is probable that it has a specific function in blood clotting. Indeed, it is difficult to establish that it has any other function. This is because the additional apolipoprotein (a), which constitutes the only difference between Lp(a) and LDL, is very closely related to plasminogen, differing by one amino acid (kringle) sequence.

However, if Lp(a) is incorporated into blood clots, the apolipoprotein (a) blocks the action of TPa and prevents the breakdown of the blood clot (5).

Thus Lp(a) is pro-coagulant, or antifibrinolytic, in its actions. Lp(a) is also preferentially accumulated in the arterial wall. This raises the probability that it is not LDL, or the remnants of LDL, that are incorporated into the artery wall. Instead, it is Lp(a), which has been wrongly identified as LDL (6).

The problem is that most researchers, when finding lipoproteins in the artery, also look for apolipoprotein B-100 (apo B-100). This protein is attached to LDL and is often used to identify LDL in the bloodstream.

However, Lp(a) also has apo B-100 attached to it, so finding apo B-100 cannot help to distinguish between LDL and Lp(a). The only way to make the distinction is to look for the apolipoprotein (a) protein. If you find this, the lipoprotein you have found must be Lp(a). Those researchers who have looked for apolipoprotein (a) have indeed found it (7, 8).

Three “facts” often used to support the cholesterol hypothesis are:

The reality is that plaques do not appear to start as fatty streaks. Most of the cholesterol in plaques cannot be derived from LDL. The lipoprotein found in plaques is most likely to be Lp(a), not LDL.