The architecture of the wrist and hand is complex and comprised of many small bones. This complexity makes intuitive sense given the small and detailed movements required of the hand. The most proximal and largest bone of the system is the radius, while 27 additional bones lead to and include the fingertips. 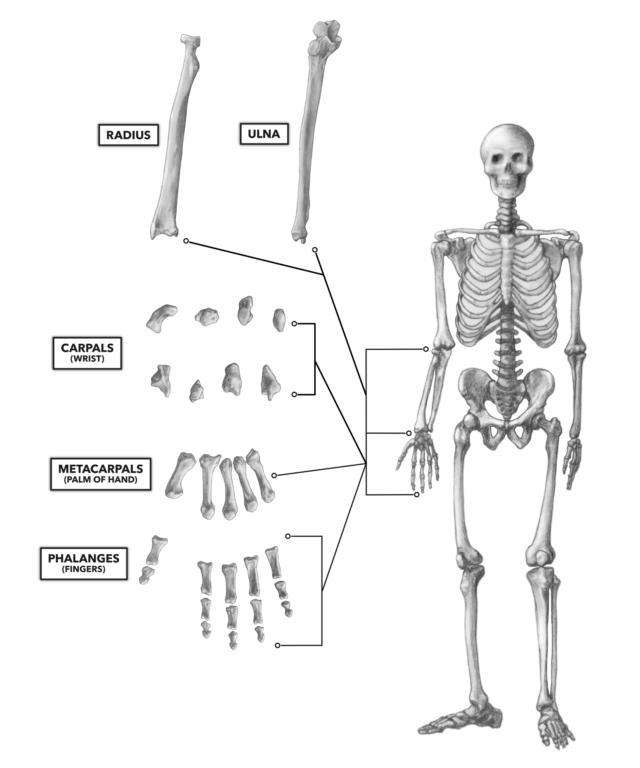 Figure 1: The bones of the wrist and hand

Radius — The distal end of the radius articulates with all but one of the bones in the proximal row of bones called the carpal bones. A noteworthy distal feature of the radius is its widening and thickening. This provides a larger surface for the muscular attachments at the base of the wrist. There is a definitive size difference between the ulna and radius near the wrist. At the distal ends of the bones, the radius is at least double the size of the ulna. Note that both the radius and ulna have defined pointy distal ends; these projections are called the radial and ulnar styloid processes. Also note that the ulna does not articulate as part of the wrist joint complex despite its close proximity.

Carpal Bones — There are eight carpal bones, or carpi, arranged in two curved asymmetrical rows: a (1) proximal row (nearer the radius) consisting of the scaphoid, lunate, triquetrum, and pisiform, and (2) a distal row (closer to the palm of the hand) consisting of the trapezium, trapezoid, capitate, and hamate. The proximal carpal row forms an arch that articulates with the radius, creating the wrist joint proper. The distal row forms the transition from wrist to hand. The carpals are irregularly shaped and visually identifiable, but most are quite difficult to palpate because they are obscured by ligaments and tendons. 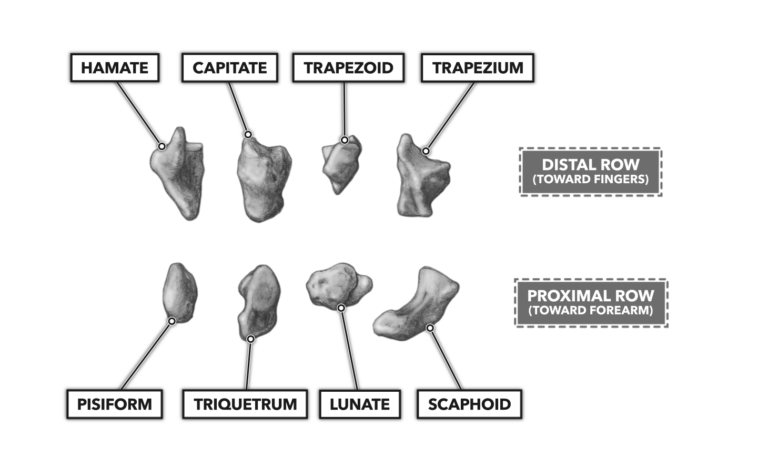 Figure 2: The carpal bones form the wrist and transition from wrist to hand.

Scaphoid — The scaphoid bone is the largest and most lateral (thumb side) of the carpal bones in the proximal row. It articulates with the radius proximally and the trapezium and trapezoid bones in the distal row of carpal bones.

Triquetrum — The triquetrum bone in the proximal row of carpal bones is roughly triangular when viewed from the posterior. It lies between the lunate and pisiform bones. Although it is very near the ulna, it does not articulate with it. Instead, the triquetrum articulates with other carpal bones, specifically the lunate and pisiform of the proximal row and the hamate of the distal row.

Pisiform — The pisiform is the fourth and most medial bone of the proximal row of carpal bones. It is a very small bone that articulates only with the triquetrum.

Trapezium — The first bone in the second (distal) row of carpal bones is the trapezium. It sits between the scaphoid and base of the first metacarpal (base of the thumb). It articulates with the first and second metacarpal, scaphoid, and trapezoid bones.

Trapezoid — On a skeleton, the trapezoid is an easy bone to identify. It is the smallest in the distal row of carpal bones. However, its size and location make it impalpable on a living human. It articulates with four bones: the scaphoid and second metacarpal along the longitudinal axis, and the flanking trapezium and capitate bones.

Capitate — The capitate is the largest of all the carpal bones, and it physically occupies the center space of the wrist. In addition to being the largest, it has more articulations than all the other carpal bones. Its seven articulation points include the scaphoid, lunate, trapezoid, hamate, and the second, third, and fourth metacarpal bones.

Hamate — The hamate is the most lateral bone in the distal row of carpal bones. It lies lateral to the capitate and crudely parallels the orientation of the combined triquetrum-pisiform pair just above it.

The hamate can be palpated on the anterior side of the wrist, as it features a prominent protrusion called the hamulus (or more commonly the hamate hook) on its anterior aspect that lies just distal to the pisiform.

Metacarpal Bones — The metacarpals are the long bones of the hand between the distal carpal bones and the phalanges (fingers). They form the palm and what we call the back of the hand. Their distal ends are the knuckles when we make a fist. 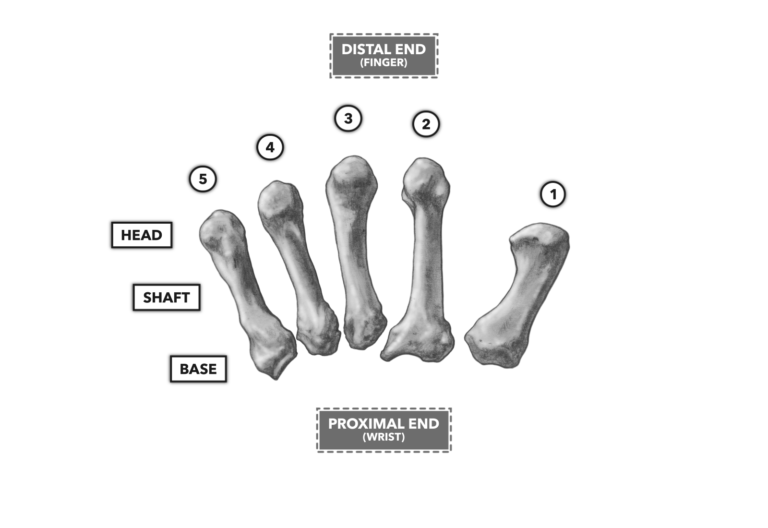 Figure 3: The metacarpals form the palm and back of the hand.

There is a general characteristic shape to a metacarpal: concave proximal end, arched anterior surface (shown here), fairly straight posterior surface, and convex distal end (the head). The metacarpals are numbered, lateral to medial (thumb side in), from one to five. All five can be palpated from the posterior aspect.

Phalanges — The phalanges are also known as digits or the fingers. As with the metacarpals, they are numbered from one to five, lateral to medial (thumb to pinky). As noted parenthetically, there are other common naming conventions for the fingers that may help eliminate confusion: 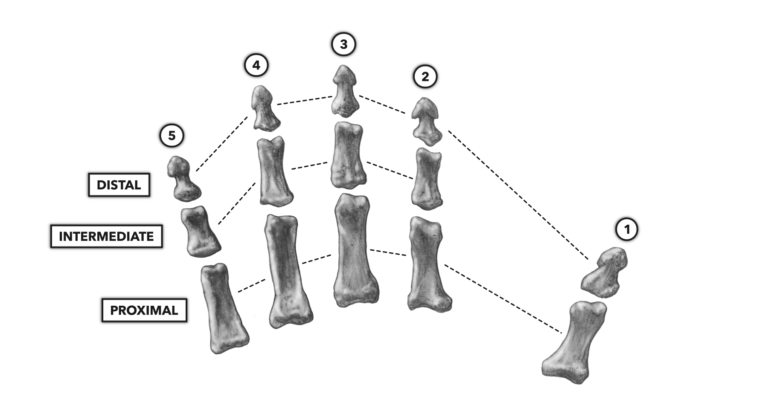 Figure 4: The phalanges, or fingers

The single exception to this arrangement is phalange one, the thumb (or pollux), which has no intermediate phalanx but only a proximal and distal phalanx.

Wrist — The wrist is a joint complex where the radius, scaphoid, lunate, and triquetrum bones articulate. It can also be called the radiocarpal joint(s). It is a biaxial joint capable of moving in two anatomical axes, the sagittal and frontal. If you consider the kinetic chain of the wrist, the wrist is an intermediary that transfers force from the hand to the radius when lifting (pulling) an object or from the radius to the hand when pushing objects. 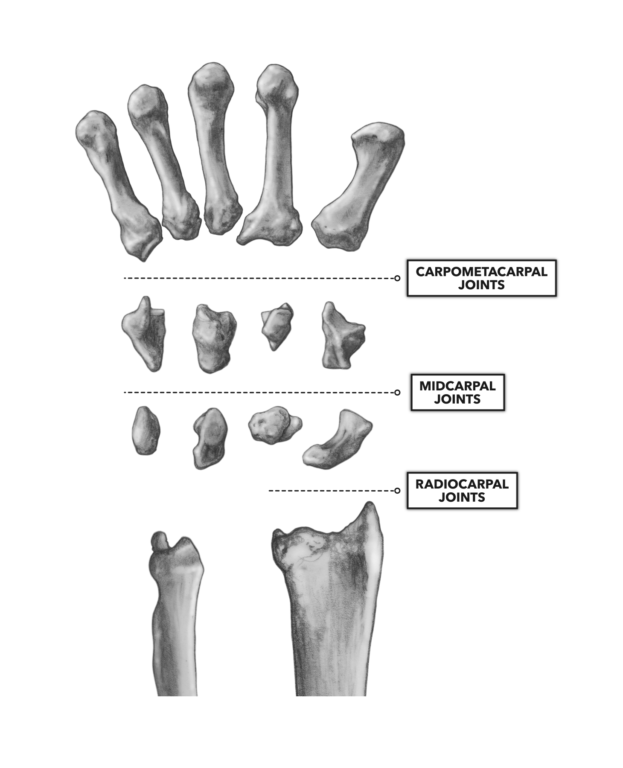 Figure 5: The joints of the wrist

Midcarpal Joints — Midcarpal joints are a specific set of intercarpal joints, attachments between the proximal and distal rows of carpal bones. These are planar synovial joints that, although capable of only limited movement, contribute to wrist mobility.

The carpal bones form an arch in the transverse plane that is concave on the palmar side. Ligaments, nerves, and blood vessels pass through this arch, which deepens with flexion of the wrist and flattens with extension. This is why it is important to mildly extend the wrist when checking for a radial pulse (the heart rate at the wrist).

Carpometacarpal Joints — These joints are easy to identify and describe, with five of them occurring where the distal row of carpal bones articulate with the proximal end of the metacarpals. Each such articulation is a carpometacarpal joint. A small amount of pressure on a relaxed and flexed wrist joint allows palpation on the dorsal surface of hand.

Metacarpophalangeal Joints — The metacarpophalangeal joints are quite easily palpated. These are the condyloid joints or the “knuckles,” where the metacarpals meet the phalanges. The rounded end of the metacarpal sits in the shallow bowl of the proximal phalanx. These are biaxial joints that allow flexion, extension, abduction, and adduction of the phalanges. The exception here is the thumb, which is a uniaxial joint that allows flexion and extension. 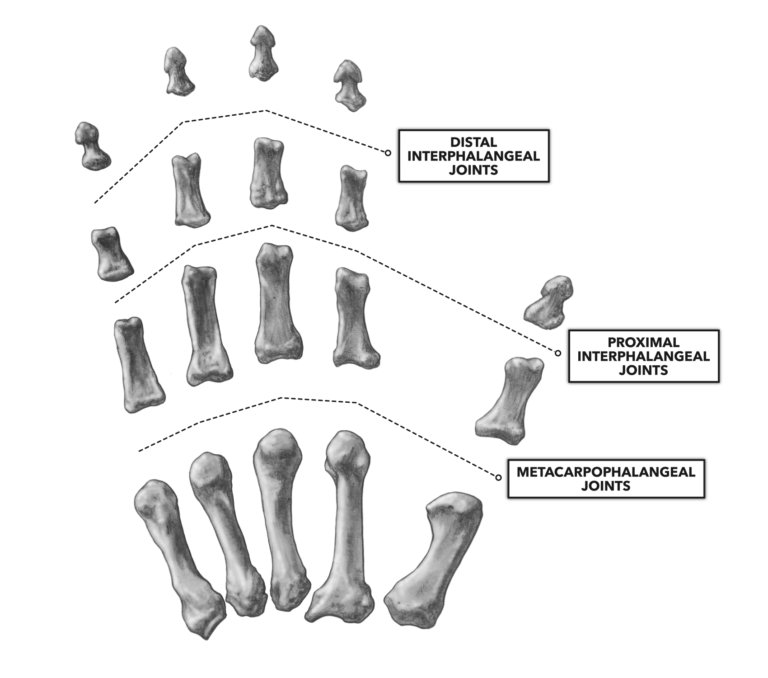 Figure 6: The interphalangeal and metacarpophalangeal joints