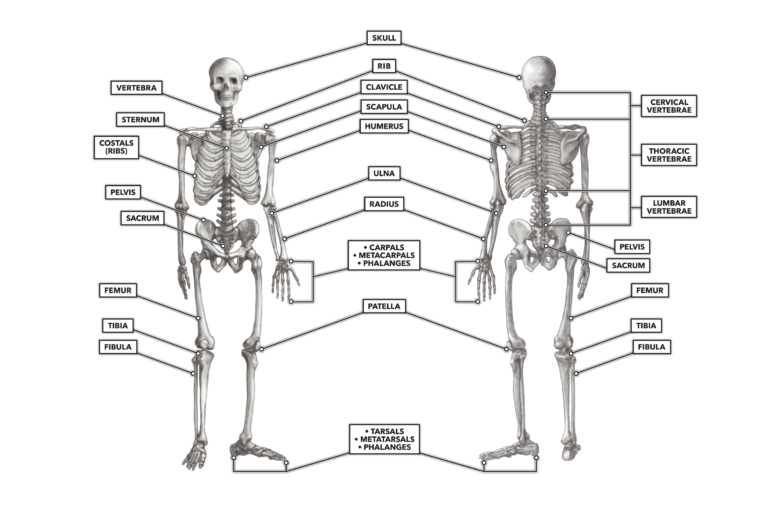 Anterior (left) and posterior (right) views of the human skeleton

The skeleton is an aggregate of many connected bones. Bones are hard but alive, so they grow through childhood and adapt during adulthood. Our bones provide the hardware for human movement. They act as internal scaffolding, supporting everything visceral and muscular. They form the lever arms that allow us to move ourselves and other things. They act as implements to strike things and as protection from things that strike us. They also provide us with a very important component of the cardiovascular system, blood cells, through the cells’ formation in the marrow inside long bones.

Almost all our approximately 206 bones (there is a small variation in number among ethnicities and individuals) can be seen on a model or diagrammatic skeleton. Those that cannot be seen lie within the skull. Most of the important bones and groups of bones in the human body are visible in the anterior view of the skeleton.

The posterior view of the skeleton reveals bones that are obscured in the anterior view, most notably, the entire stack of individual vertebrae that span vertically from the sacrum to the skull. The vertebrae are divided into three categories: those that form the neck (the cervical vertebrae), those to which the ribs are attached (the thoracic vertebrae), and those between the rib cage and sacrum. The structure of the scapula is also more fully visible from the posterior.