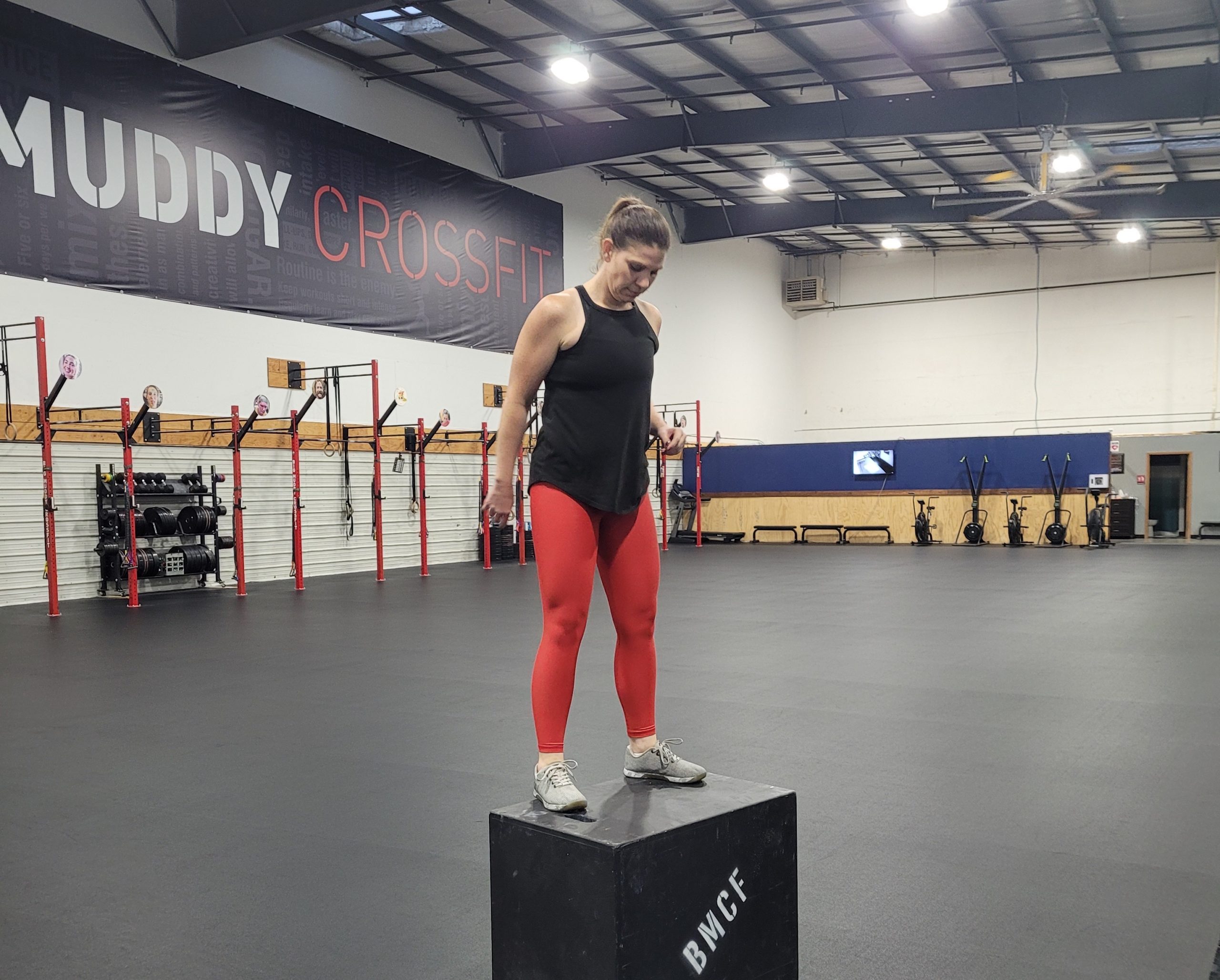 She welcomed the anger because it protected her from the fear.

Passaro was diagnosed with combat-related PTSD in 2005 after serving in Iraq. She slept with the lights on, careened off the road to avoid driving next to anything that resembled an IED, and felt her heart race from the smell of diesel fuel.

Then there were the trains.

“When a train is going along very slowly and it stops and then the next rail cars in line kind of bump into them in front of it,” Passaro said, “that sound would just send me into panic and anxiety.”

The symptoms were a part of Passaro’s life for years, and she lived with them as best she could. Over the years she got married and had kids. The panic and anger persisted. She had trouble sleeping, and when she felt frustrated or stressed, she got angry. She often took out her anger on her kids, her husband, and her co-workers. She noticed people didn’t want to be around her at work, and worse, her children began to mimic her outbursts. Her husband told her he didn’t know what to do with her.

Passaro took medication for her ADHD and tried mindfulness and meditation for her PTSD, which helped, but it wasn’t until she started working out regularly at Big Muddy CrossFit in Bismark, North Dakota, that her life began to change. CrossFit helped her understand the effect of exercise on mental health.

And that changed everything.

Your Brain on Exercise

A cross-sectional study  collected data on more than 1.2 million adults in the United States from 2011 to 2015 and found people who exercised experienced a 43.2-percent decrease in mental health issues. According to the study, all exercise has an association with improved mental health, but team sports show the greatest reduction in poor mental health. Connecting with other people and exercising is powerful medicine.

Using exercise as a pathway to improved mental health is also an effective motivation technique. In contrast to losing weight, building muscle, or improving cardiovascular endurance — which all take months, even years, to achieve — the post-workout high is immediate. Many CrossFit athletes know the fastest route to a good mood is a class at their local affiliate.

Contrary to popular belief, the good feelings following a workout are most likely not due to endorphins. David Linden, Ph.D., a professor of neuroscience at the Johns Hopkins School of Medicine, says this is because endorphins don’t pass the blood-brain barrier.

Your post-exercise high is similar to another type of high.

Even better, the mental health benefits of exercise aren’t short-lived. Regular exercise helps new blood vessels grow in the brain and may also produce new brain cells. All this makes the brain less reactive to physical and emotional stress. 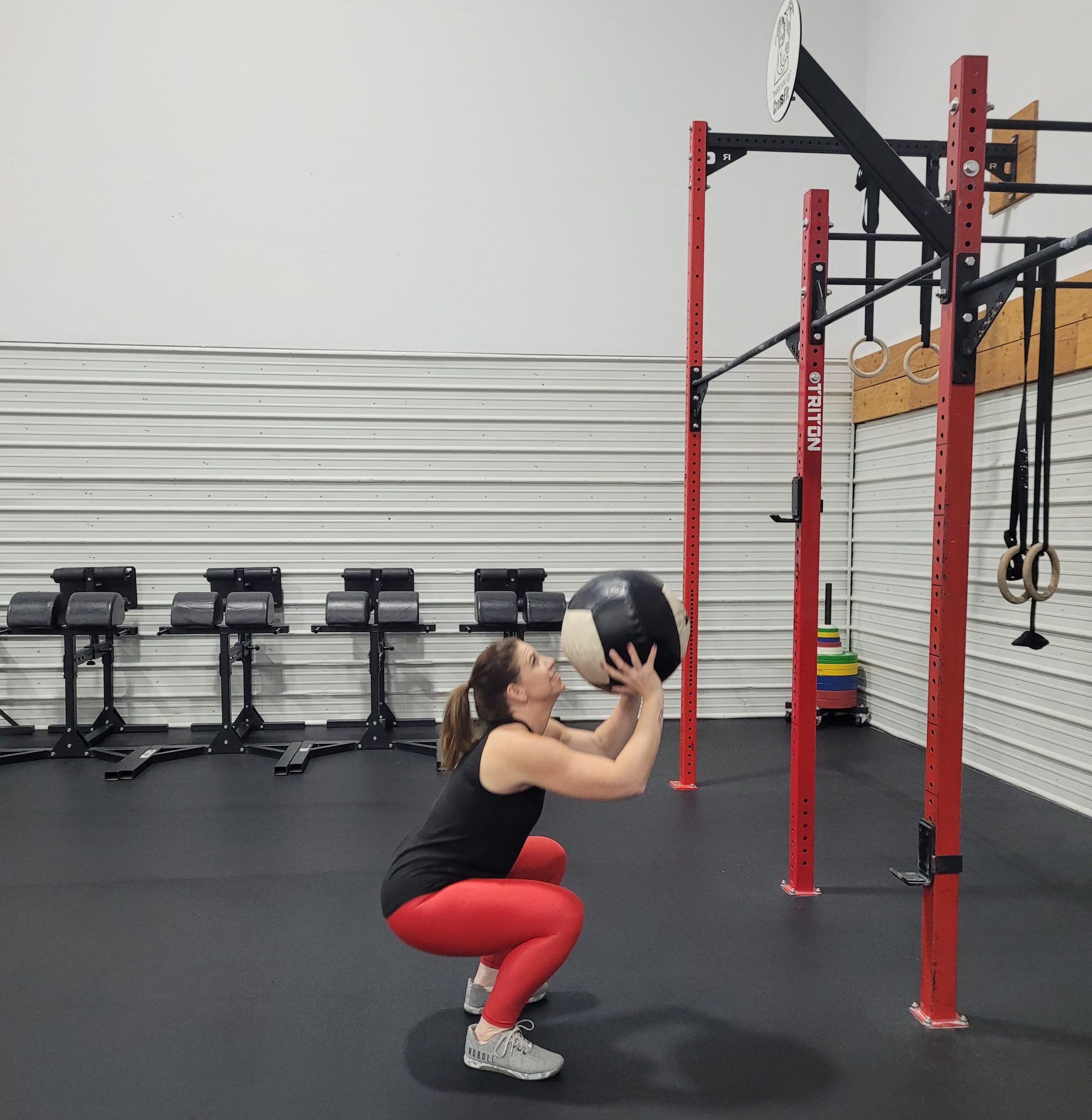 On the day she tried CrossFit for the first time — after giving in to the encouragement of a friend — she was so nervous she had to open up her meditation app, which she used to handle anxiety triggers from her PTSD.

“I think back to that and I think how silly it was, because I was in that building for three minutes and I already felt like I was home,” Passaro said.

“It was just an incredible atmosphere. My life has drastically changed since finding Big Muddy,” she said.

“I do look way better now than I did in 2017, but that’s not even what keeps me going back,” Passaro said.

“It’s that high, that euphoria you get at the end where you’re laying on the ground, like, ‘Oh my God, this sucks, but man, I feel good,’” she said.

Now that she has been going to Big Muddy for four years, Passaro said the habits that encourage good mental health — like exercising and eating well — are well established, and her fear and anxiety have faded into the background. Knowing what it was like before, and knowing exercise helped pull her out of that dark hole, working out regularly doesn’t feel like a chore or a task to check off her list.

“It’s not something I dread. It’s just part of who I am now,” Passaro said. 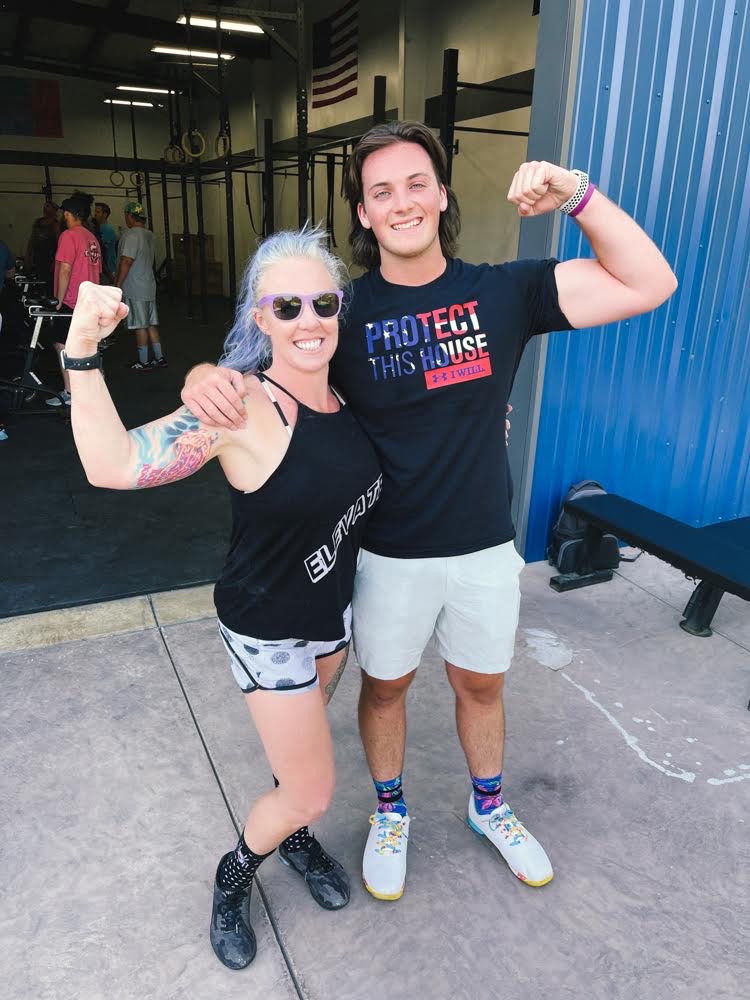 Before she started CrossFit, Manson never worked out regularly. She has a severe heart condition that held her back, and she never found a workout routine she liked.

Then she bought a Groupon for a month of CrossFit at CrossFit Watsonville and was hooked. Soon she had a regular 5:00-a.m. exercise routine and discovered she loved lifting heavy weights.

“I noticed on the days that I did it first thing in the morning, I’d have a good day,” Manson said.

She always hated the early-morning drive to the gym but pushed through those feelings because she wanted to see her friends and feel that sense of accomplishment.

However, Manson didn’t really think about the connection between exercise and her mood until a few years later. Her 15 year-old son, Logan, came home and noticed she was in a terrible mood.

He looked at her and said, “When was the last time you worked out?”

When her son recognized the impact exercise had on her mental health, Manson became much more aware of the connection.

“One of the things that the majority of people present with when they come in is depression and anxiety. It just goes hand-in-hand with addiction,” Manson said. 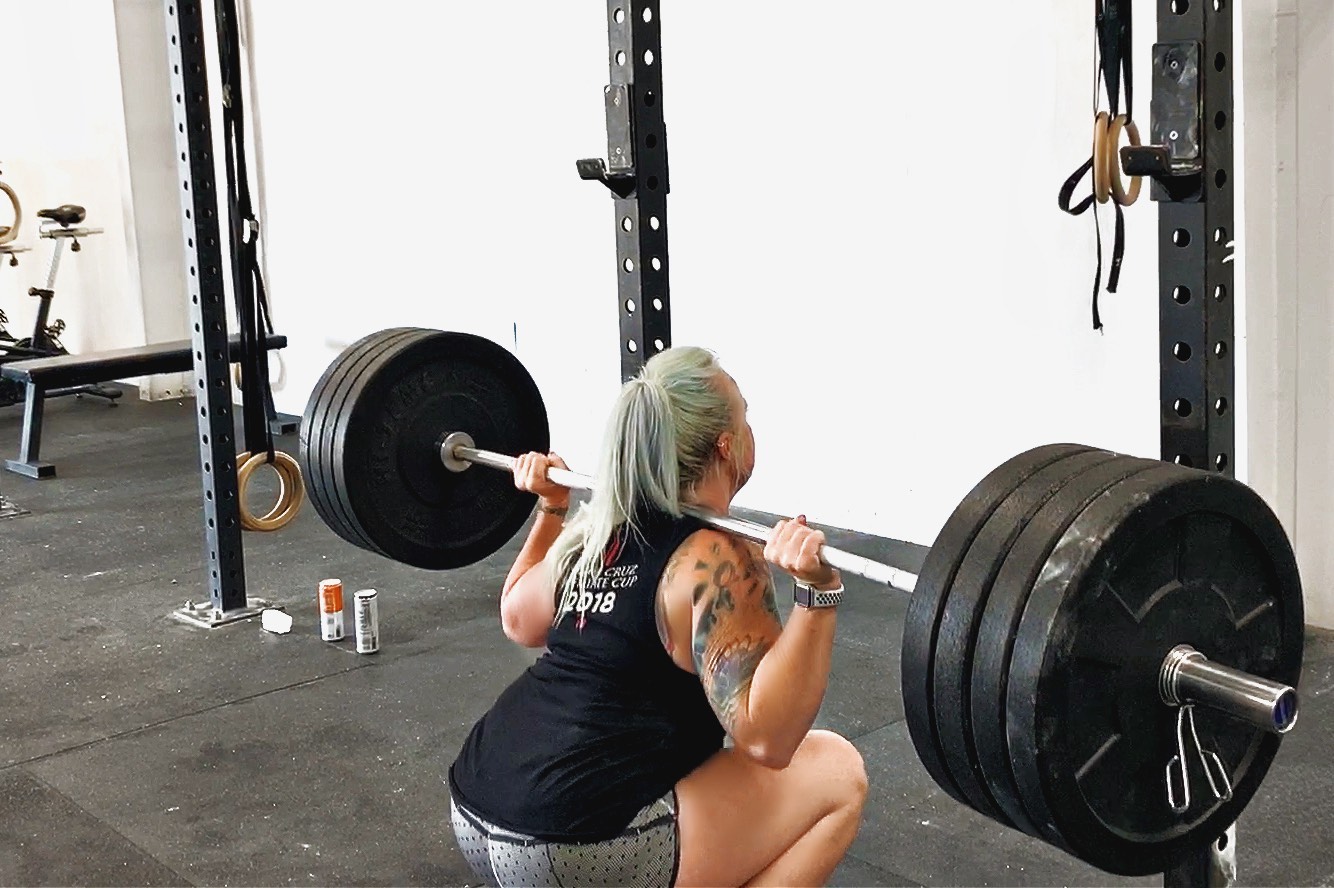 The approach at Elevate is to safely take people off all drugs and medication, introduce exercise, good nutrition, and mindfulness while they’re in the program, and then reintroduce antidepressants or other medication if needed.

“When they’re leaving, for 85 percent of them, the anxiety and depression is gone,” Manson said.

Manson said an important concept at Elevate is living in the present moment, not obsessing about the past or worrying about the future.

Anyone who has done CrossFit knows it’s almost impossible to think about anything but the present moment in the middle of a grueling workout.

“I realized that no matter what was going on at work and in life, the second I’d walk into the gym, I had to be 100 percent present,” Manson said.

“You can’t be anywhere else when you’re in a CrossFit gym. You are 100 percent in there. I found such a peace inside my mind inside the gym,” she said.

The impact of exercise on mental health hit close to home in 2020, when Logan missed out on his senior year of high school due to the pandemic.

The loss of his volleyball team, senior prom, and everything that comes with the last year of high school hit Logan hard. He was bitter and angry about missing out on so many important experiences, Manson said.

Unsure how to help, Manson started including him in her garage CrossFit workouts.

“We would go in the gym, and there were many times where he wouldn’t say a word, or if I tried to coach him, he’d be mad, but I would keep him going in,” she said.

They worked on his nutrition, and she told him if he couldn’t be in school, at least he’d be in the best shape of his life in time for college.

“The only thing that got him through was CrossFit,” Manson said.

This summer Logan began working at Elevate and participated in the classes at CrossFit EAS.

“He gets to work out with all my people from work and me up here, which is phenomenal,” Manson said. “A cornerstone of his life now is exercise. That’s amazing.” 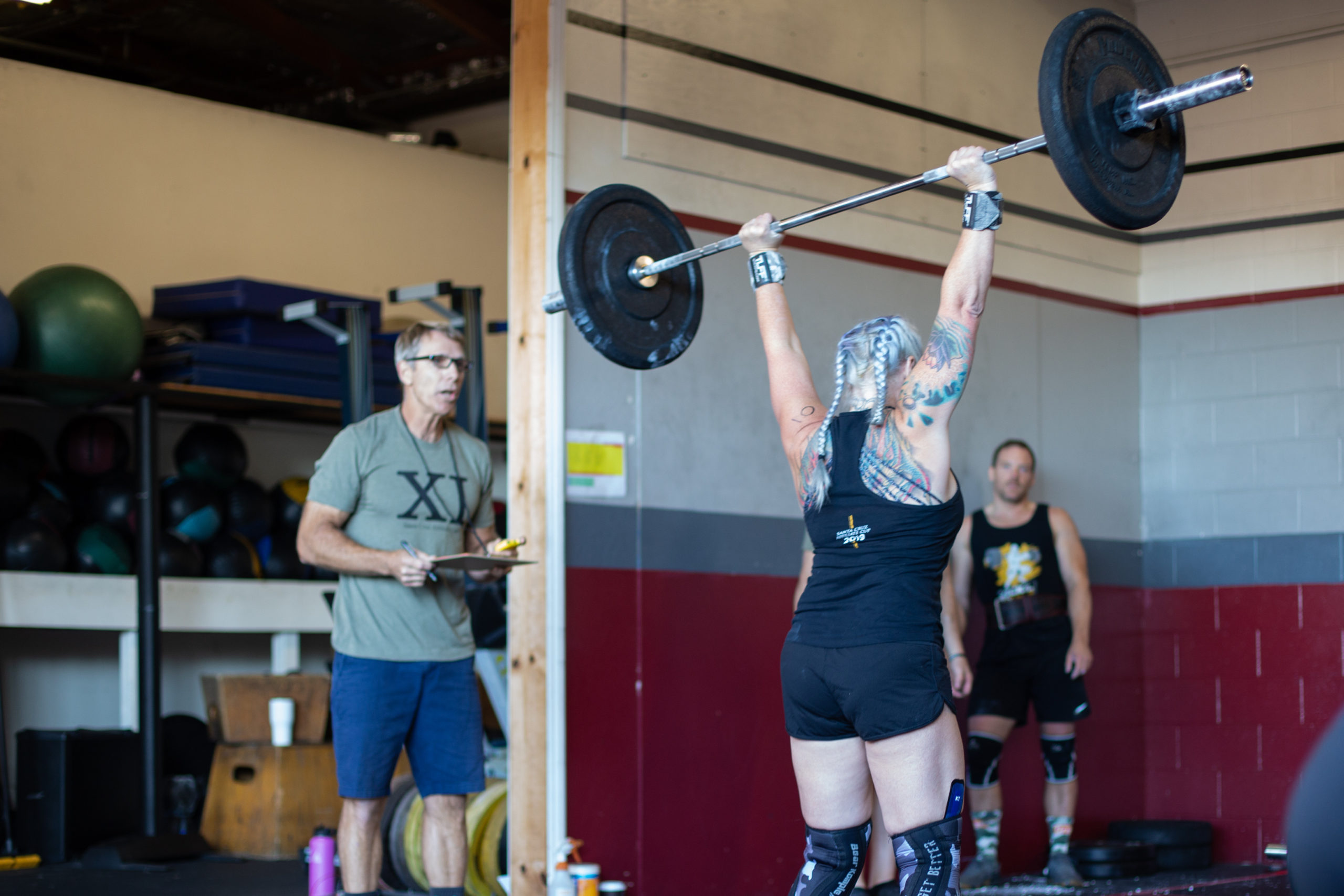 The Habit of Good Mental Health

Over Fourth of July weekend, Passaro and her family were camping at Lake Sakakawea in North Dakota. She’d worked out on Thursday and Friday and relaxed by the lake on Saturday. On Sunday, the Fourth of July, fireworks started going off around them. Passaro felt her heart rate elevating, and she noticed as her mind started to cast around for something to make her feel better.

She thought, “Do I want a snack? Do I want to binge on my phone? Do I need a drink?”

Passaro knew each of those things would provide very temporary relief, but would end up putting her right back where she was — anxious and irritated.

“Finally it dawned on me, ‘You need to go kayaking for an hour and get some exercise,’” she remembers thinking.

After kayaking with her husband, Passaro said she was able to feel the joy of the holiday.

While she’s not immune to mental health struggles, Passaro now has a powerful tool to address her stress and anxiety.

“I feel like I’m getting to the point where my mental health is now a good habit and my poor mental health from before is starting to become like a bad memory,” she said.