Type 2 diabetes is generally thought to be chronic and progressive, marked by an inevitable decline in beta cell function and increase in plasma glucose levels. Current pharmaceutical treatments are fundamentally unable to alter the course of the disease. Bariatric surgery has been shown to rapidly normalize glucose levels, even prior to weight loss. This study tested whether severe caloric restriction — similar to that seen alongside bariatric surgery — could lead to similar glycemic benefits. The study results indicated a very low-calorie diet rapidly improves liver insulin sensitivity and gradually improves pancreatic function in the process reversing Type 2 diabetes.

During the study, 11 diabetics were fed a 600-calorie-per-day diet (VLCD), most of which came from Optifast shakes and the remainder of which came from vegetables. All subjects were overweight or obese and had been diabetic for four years or less. Nine controls were selected, matched for age, sex, and weight.

Within the first week on a VLCD, fasting glucose levels had normalized (from 9.2 to 5.9 mmol), as had fasting insulin levels (151 to 73 units). Hepatic insulin sensitivity (as measured by the extent to which glucose production is suppressed by insulin) was improved to a level better than controls, and hepatic glucose production decreased. These changes occurred alongside a 30% reduction in liver fat (from 12.8% to 8.5% of weight) within the first week. By week eight, liver fat was down 70% and similar to that of healthy-weight, nondiabetic controls. 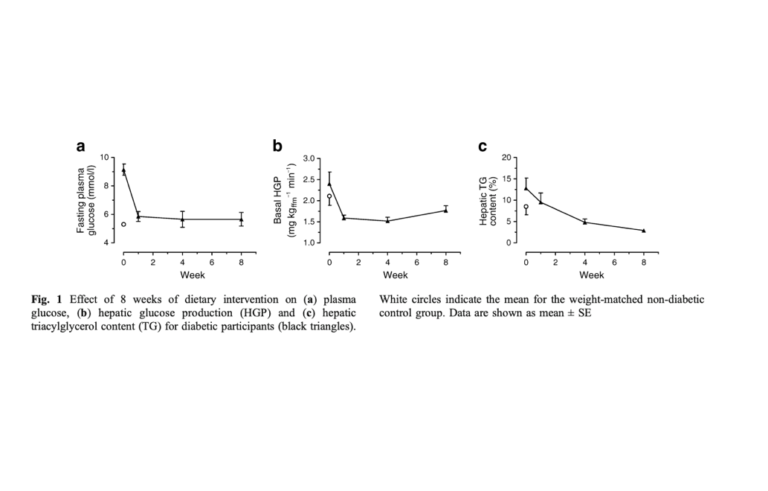 Notably, peripheral glucose disposal — i.e., the rate at which the muscles and other tissues cleared glucose from the blood, a measure correlated with peripheral insulin sensitivity — did not change significantly over the eight-week period. 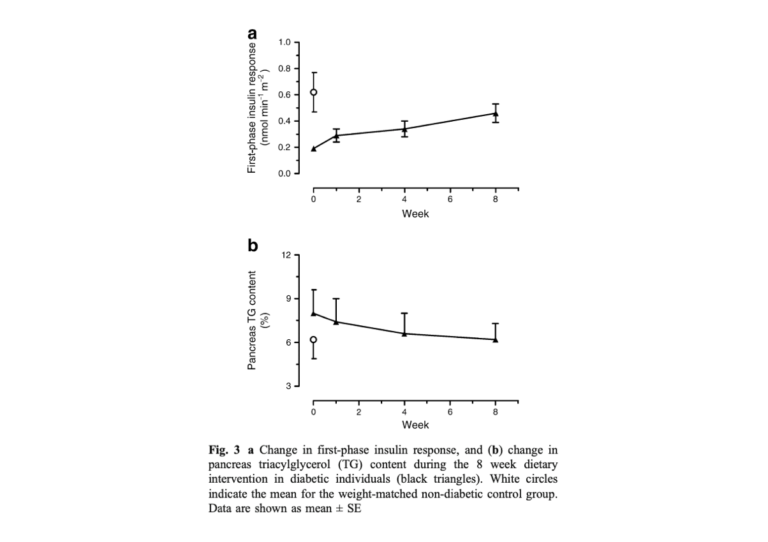 Taken together, these results indicate:

Note this is one of multiple studies indicating the benefits of gastric bypass surgery for diabetics can be explained, at least in large part, by the caloric restriction associated with the surgery rather than the surgery itself (1).