This 2004 article reviews the mechanisms by which exercise improves insulin sensitivity. Multiple streams of evidence suggest exercise has beneficial effects and sedentary behavior detrimental effects on insulin action and blood glucose control. The authors note that skeletal muscle insulin resistance is “the hallmark feature” of the obese and/or diabetic.

They discuss a variety of potential mechanisms by which inactivity could lead to skeletal muscle insulin resistance and activity could reverse it. Specifically:

In other words, skeletal muscle insulin resistance — and thus, to a large extent, overall insulin resistance — in diabetic subjects is due to reduced mitochondria production and/or activity and reduced insulin signaling in muscle cells. Exercise has been shown to reverse these deficits.

As the authors conclude:

Given the strong evidence for a direct role of physical activity in the prevention of insulin resistance, and the fact that exercise training increases mitochondrial biogenesis and improves glucose tolerance and insulin action in individuals with insulin resistance and type 2 diabetes, the question of why such a potent modulator of these conditions is not more commonly prescribed is perplexing and should be of utmost concern to medical health care professionals worldwide. To continue to attack the growing health burden by investing almost exclusively in strategies that target secondary and tertiary treatment of chronic disease states (i.e. pharmaceutical interventions) is extremely short sighted: primary defence mechanisms (i.e. exercise/diet and lifestyle interventions) will decrease disease prevalence by preventing these conditions in the first place!

Figure 1 below summarizes these mechanisms. 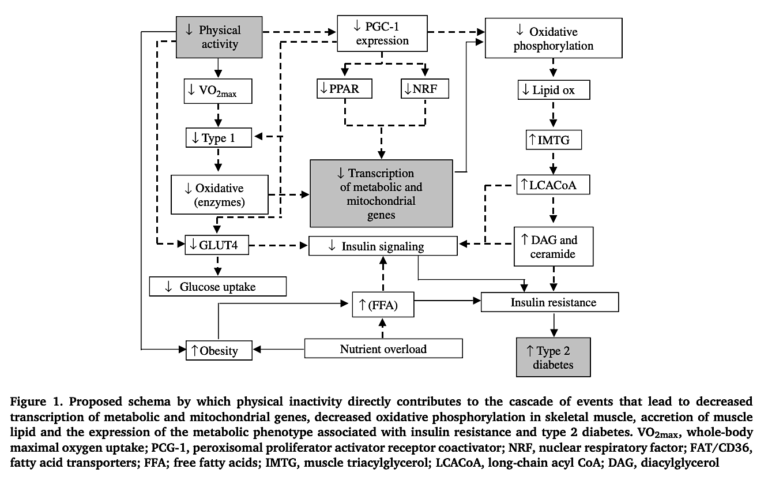