The reported links between red and/or processed meat consumption and negative health outcomes (e.g., increased cancer risk and increased mortality) are largely based on observational evidence (1). This 2015 review addresses a few of the consistent issues with this evidence.

Observational studies attempt to assess the diets of hundreds or thousands of subjects then track how differences in intake patterns correlate with differences in the risk of specific medical events. Researchers use dietary surveys to determine what and how much subjects eat. These surveys, however, suffer from fundamental flaws. Dietary surveys have been shown to do a poor job of estimating actual intake when compared to more direct measurement methods — crucially, the errors are systematic, not random, with subjects consistently overreporting foods they perceive as “healthy” and underreporting “unhealthy” foods (2). One group has gone so far as to conclude “something is not better than nothing” — that is, the reliability of dietary surveys is so low and the risk of drawing incorrect assumptions from them so high that we would be better off with no estimation at all (3).

Reporting errors are compounded with insufficient measurement frequency. Observational studies often assess dietary intake once at the start of the study and use this baseline dietary data to assess diet-related risk over the following months or years. The studies assume, in other words, that diet does not change over time. The Nurses’ Health Study showed this is not a valid assumption, with more than three-quarters of subjects shifting their fiber intake by more than two quintiles over six years (4).

Additionally, the magnitude of effect observed in even the most inflammatory observational research linking meat to ill health is small and of questionable significance. Observational research found smoking increased lung cancer risk more than 10-fold, and excessive alcohol consumption increased risk of cirrhosis more than seven-fold. Meat consumption, comparatively, has rarely been found to increase the risk of any associated condition by more than 1.5-fold.

The NIH-AARP diet study serves as an example. One of the most-cited studies linking red meat to negative health outcomes, it found red meat intake to be associated with a 31% increase in total mortality. Red meat was associated with increased mortality due to cancer and cardiovascular disease — but also due to accidents, injuries, sudden deaths, and a broad “all other deaths” category. It seems implausible that eating more red meat could increase risk of dying in a car accident. Given these data, the more likely explanation may be that red meat is a marker for a broader set of unhealthy behavioral and environmental factors. 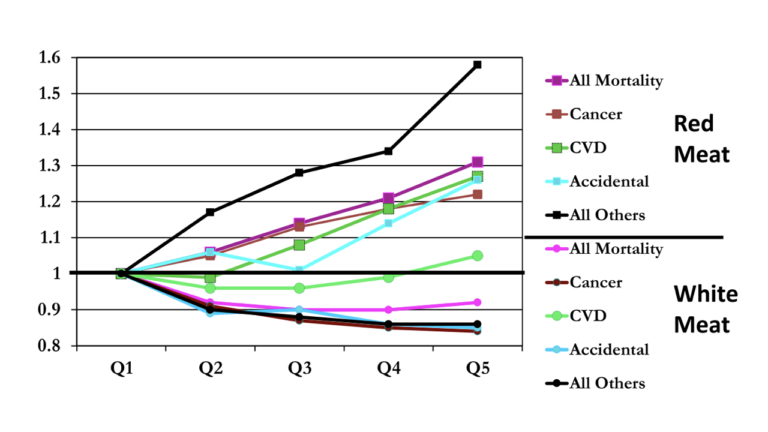 Finally, a broader survey of the literature has categorically undermined the value of nutritional epidemiology. Randomized controlled trials have failed to show reductions in meat intake or total or saturated fat consumption reduce risk of heart disease, cancer, or other endpoints (5). A 2011 paper by two biostatisticians surveyed 52 claims derived from observational research and subsequently tested in a randomized controlled trial that linked specific dietary factors to health benefits or harms. Not a single one of these claims was confirmed in the relevant RCT, and five RCTs found an effect in the opposite direction of the observational research (i.e., observational research found a nutrient increased risk while the RCT found decreased risk, or vice versa). Given this data, any nutritional claims supported purely by observational evidence must be viewed with extreme skepticism.

Taken together, these issues fundamentally undermine the value of the epidemiologically derived link between red and/or processed meat and cancer, cardiovascular disease, or overall mortality. Such links will remain uncertain and arguably untestable until, at the very least, our ability to track exactly what individuals eat, at scale, repeatedly, over time, improves dramatically.