Weight loss was similar in responders and non-responders (13 to 16 kg). Alongside weight loss, liver fat content decreased dramatically in all subjects, from 16% (liver fat fraction) at baseline to 3% after weight loss, a value similar to healthy controls. Pancreatic fat content similarly decreased from an elevated baseline to healthy levels in all subjects. Previous work by these authors, as well as work featured on CrossFit.com, has linked decreased pancreatic and liver fat to improvements in glycemic control and insulin response (2). 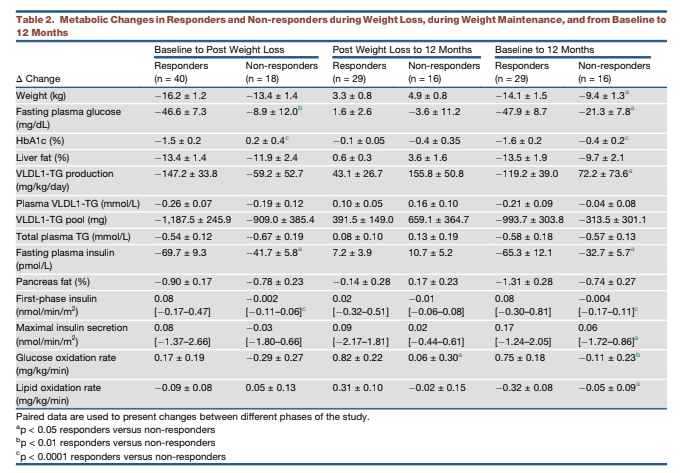 Taken together, this data indicates significant weight loss leads to liver and pancreatic fat clearance in all subjects. The pancreatic beta cells of some subjects, however, fail to return to normal levels of function even after the pancreas is cleared of fat. In these subjects, the insulin response to a glucose load (i.e., a meal) remains suppressed, so blood glucose levels and HbA1c levels remain elevated and diabetes persists even with weight loss.

Previous research has hypothesized pancreatic beta-cell stress results from high blood glucose, blood lipid, and/or insulin production levels (3). It is widely known that pancreatic beta cell function degrades over time as diabetes persists, whether as a consequence of these stressors or due to other factors.

This study contributes to the research developed in previous trials showing diabetes is reversible in the majority of subjects through the use of a calorie-restricted diet (4). Some (Lim 2011, Steve 2016) have shown a very low-calorie diet can induce diabetes reversal in as little as a few weeks. The DiRECT study builds on these smaller trials, further establishing that diabetes can be reversed through diet alone. Just as importantly, this study reinforces the importance of early intervention, as a diet started soon after diagnosis, before stressors have begun to degrade pancreatic beta-cell function, is more likely to successfully reverse diabetes.