Exercise-induced muscle damage (EIMD) is perhaps the most commonly cited mechanism for muscle growth. The idea is that intense exercise causes damage to muscle fibers, which are then repaired post-workout. Rather than rebuilding exactly what was there before, the body rebuilds muscle to be bigger and stronger. The muscle is then adapted to better tolerate future exposure to stress. Of course, too much muscle damage leads to injury and even tissue necrosis. The EIMD hypothesis posits there is a sweet spot, where just the right amount of damage yields gains in muscular strength and size. 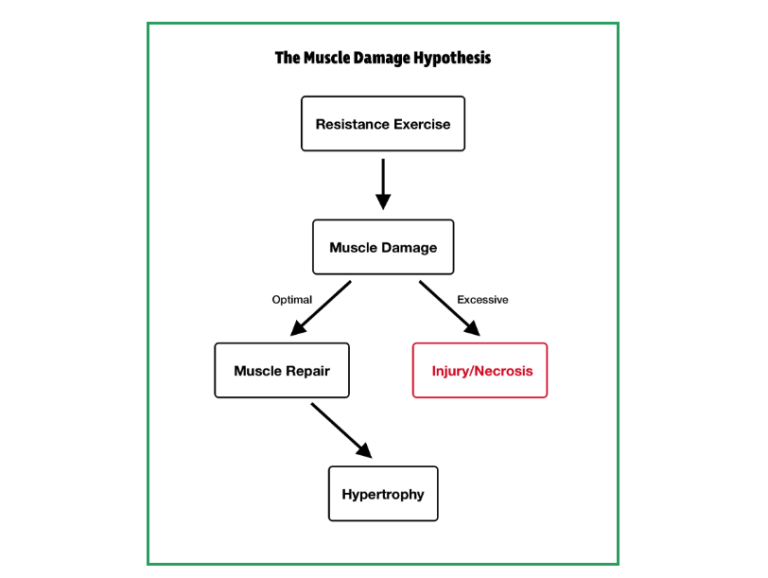 Here are a few explanations of the EIMD hypothesis online:

Muscle hypertrophy occurs when the fibers of the muscles sustain damage or injury. The body repairs damaged fibers by fusing them, which increases the mass and size of the muscles. (“How to build muscle with exercise”)

When a person takes part in resistance exercises such as weight training, their muscle tissue is placed under stress. This causes micro-tears in the muscle fibres. The body responds by repairing the muscle fibres and making them larger. (“Muscular system”)

Lifting weights causes damage to your muscles that breaks down the proteins; to combat this, your body makes new muscle protein to repair the damage. (“When do muscles grow after working out with weights?”)

Eccentric training, where you actively work the negative by allowing the muscle to lengthen under load, is known to be particularly effective in stimulating hypertrophy (muscle growth). Your muscles are stronger in eccentric contraction than isometric, meaning you can lower a heavier weight than you can hold. And you can hold a heavier weight than you can lift. Thus, your muscles are capable of generating maximum force under eccentric conditions.

A simple way to visualize what’s going on inside your muscles is to lace the fingers of your hands together. Now try to pull them apart. Think of each finger as a muscle fiber. As your fingers slide apart, friction causes your skin to burn, which is analogous to damaging the sheaths around your muscle tissues. Your knuckles might even pop, like the actin and myosin filaments that must engage and disengage while lengthening under tension. Continue interlacing your fingers and pulling them apart. Please post to comments if your hands get bigger.

Eccentric muscle actions produce greater force but recruit fewer muscle fibers than isometric or concentric actions (1). This means each active fiber is exposed to a higher level of stress. Not surprisingly, eccentric actions are known to produce the most EIMD. New and unfamiliar movements are also known to induce EIMD, likely because your muscles are firing in an uncoordinated fashion. It’s like pressing down the gas pedal (concentric action) and the brakes (eccentric action) at the same time.

A meta-analysis of 20 studies found a statistically significant difference of almost half a centimeter in muscle girth between eccentric-trained groups and concentric-trained groups. Smaller effects were seen when the loads were matched between groups. The main advantage of eccentric movement is the potential to move heavier loads, and greater training effects were seen when this was put to the test.

This would seem to validate the idea that muscle damage leads to bigger, stronger muscles. But before you do something drastic to damage your muscles, there’s more evidence to consider.

First, hypertrophy doesn’t all happen in one workout. Typically, it takes several months of training to exhibit much if any growth. Muscle damage decreases rapidly after the first exposure to a stimulus (2). This is called the repeated bout effect. Do a heavy eccentric workout for the first time and you will no doubt feel sore afterwards. You might even get some edema, which is just fluid buildup (3), not to be confused with hypertrophy. Over time, your body adapts both neurologically and structurally to better tolerate eccentric loads. Motor unit synchronization improves (more gas, less brakes), connective tissue gets stronger, muscle fibers get stiffer, and myofibrils become more aligned (2).

Another point often used to support the EIMD hypothesis is that increased rates of protein turnover are observed in connection with muscle damage (4). This is not terribly surprising, though, because damaged structures must be demolished and then rebuilt with new protein, hence the turnover.

Endurance exercise is also known to cause muscle damage, but it is not associated with muscle growth. Endurance athletes are low on the food chain when it comes to muscular size and strength.

One clever study took advantage of the repeated bout effect (5). The study authors divided 14 college students into two training groups, pre-trained and naive. Both groups would perform high-force eccentrics on a recumbent bike. The machine forced them to pedal backwards against resistance. In the pre-trained group, they started with only five-minute workouts and ramped up to 20 minutes over the course of three weeks. Members of the naive group initiated their training at week four and had no ramp-up. Both groups performed three 20-minute workouts per week for the next 11 weeks.

The expectation was that the naive group would experience a high amount of muscle damage, whereas the pre-trained group would not. The researchers measured creatine kinase, an enzyme that leaks out of damaged muscle fibers. They observed creatine kinase levels more than three times higher in the naive group than in the pre-trained group at their respective peak values. 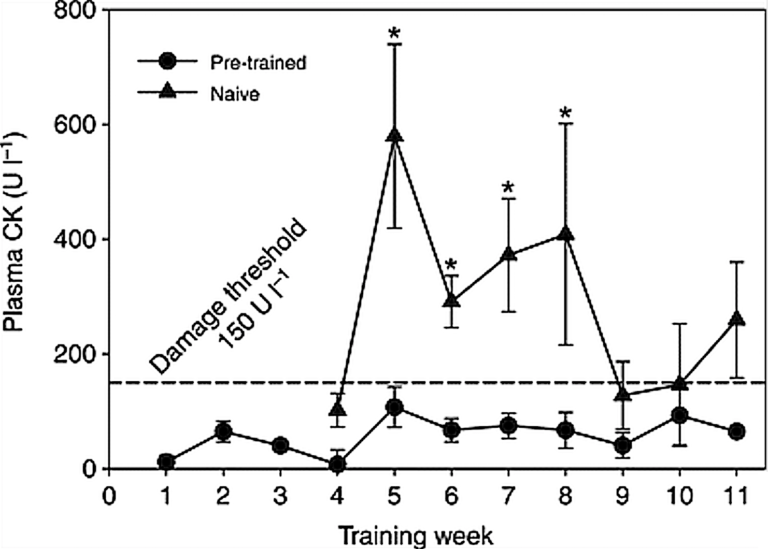 The pre-trained and naive groups both experienced improvements in strength (25% and 26%) and hypertrophy (6.5% and 7.5%) of the quadriceps muscle. The differences between the groups were not statistically significant. In their discussion of the results, the authors wrote:

From an engineering perspective, damage as a necessary precursor for restructuring would seem to be a poor “design feature,” requiring unnecessary vulnerability (i.e. sarcolemma damage, soreness and weakness) in response to a requirement for additional strength. It seems that a need for added strength to be coupled to a requirement of damage-induced diminished strength would certainly be avoided by natural selection if possible.

Eccentric training seems to exert its hypertrophic effect via the high level of mechanical tension it affords. Muscle damage happens to be present at the crime scene, but it is possibly just guilt by association. There are more plausible mechanisms for hypertrophy, which we will explore more in future articles.