The Multiple Risk Factor Intervention Trial (MRFIT) was the result of a large award from what is now known as the National Heart, Lung, and Blood Institute (NHLBI) to build on the then-emerging understanding of the causes of heart disease. MRFIT, published in 1982, randomized 12,866 high-risk men (men who smoked or had high cholesterol or blood pressure, but who had not previously had a heart attack) to a complex intervention or control. The “special intervention” for the former group included (1) cessation of cigarette smoking, (2) weight loss, (3) hypertensive medication, and (4) nutritional counseling, with a focus on reducing saturated fat and cholesterol intake. Controls were given no special treatment. Subjects were followed for an average of seven years.

The intervention was successful in achieving its targets. The special intervention (SI) group saw greater decreases in blood pressure, serum cholesterol, and smoking rates over the course of six annual visits, compared to usual care (UC) controls. The groups were well-matched at baseline, and by year six, the SI group’s mean DBP was 3 mm Hg lower, serum cholesterol 5 mg/dL lower (entirely accounted for by an LDL decrease), and smoking rates 13% lower (32% vs 45%).

The primary outcome, however, was CHD mortality, and here the trial failed to show an impact. Over six years, there were 92 CHD deaths in the SI group (out of 6,428 initial participants) and 104 in the UC group (from 6,438 participants)—an improvement in mortality that did not reach statistical significance. The difference in all-cause mortality was even smaller, with 265 deaths in the SI group and 260 in the UC. It may be worth noting that the single largest difference between the groups in terms of mortality by a specific cause was related to deaths due to cancer, which numbered 81 in the SI group and 69 in UC. 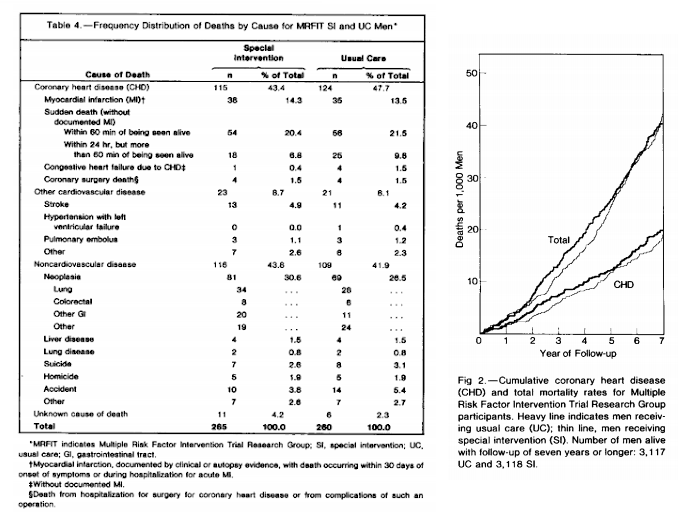 The MRFIT authors concluded that previous evidence suggested the core elements of the intervention—reductions in blood pressure, smoking, and cholesterol—are beneficial. They suggested the trial may have been underpowered (i.e., had too few subjects or too short a duration) or hypertensive medication may have increased mortality (due to the SI group showing greater improvements among subjects who were normotensive at baseline and therefore less likely to be exposed to such medication).

Overall, this trial failed to demonstrate that lowering cholesterol (via reduction in cholesterol and saturated fat intake), ceasing smoking, and normalizing blood pressure together significantly decreases heart disease risk in high-risk men, and the combinatorial therapy makes it impossible to discern the positive (or even negative, as in the case of drug-based blood pressure lowering) impact of each treatment element individually.