Metformin is the most widely prescribed medication for the treatment of Type 2 diabetes and more recently has been promoted as a general anti-aging drug. Previous research, however, has suggested metformin may counteract the benefits of exercise, specifically the impacts of exercise on skeletal-muscular mitochondrial function and cardiorespiratory function (1).

This trial randomized patients to placebo (26 subjects) or metformin (27 subjects) alongside a 12-week aerobic exercise program. All subjects had at least one risk factor for Type 2 diabetes but were metformin naive. The exercise prescription was three weekly 45-min. sessions (treadmill, cycling, or elliptical) at 65-85% HRmax. Exercise intensity increased over the course of the trial.

Note: These tests were all taken 36 hours after the last metformin dose and thus represent the consequences of metformin’s effects, not the acute impacts of metformin itself. These results are summarized in Figure 1 below. Metformin did not diminish improvements in HbA1c or any fasting metabolic measures. 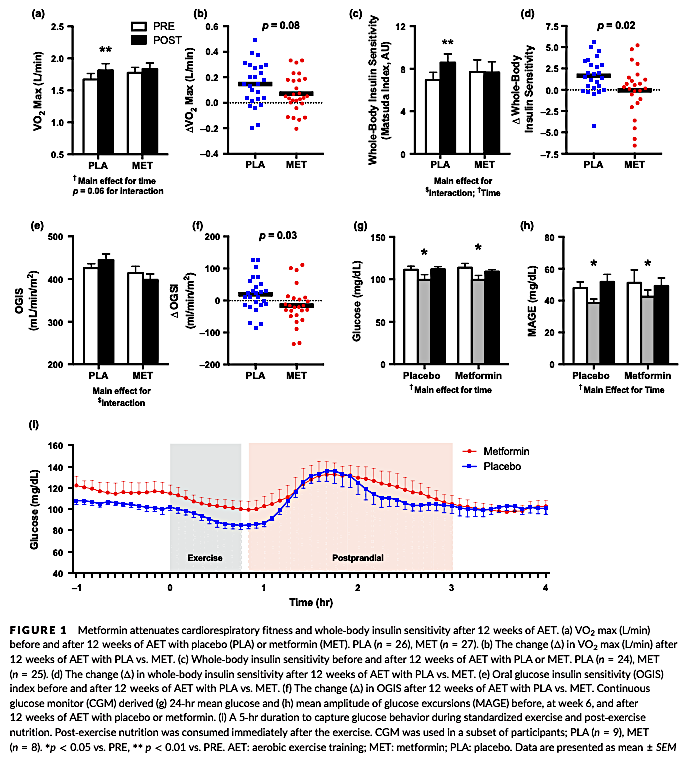 In sum, this paper points to both a specific and a broad conclusion. First, taking metformin alongside exercise inhibits two of the major benefits attributed to exercise (improvements in insulin sensitivity and cardiovascular fitness); this suggests metformin has an inhibitory rather than supplementary effect, despite improving insulin sensitivity when given without exercise. Second, the trial suggests recommendations to prescribe metformin broadly as an anti-aging medication are premature, as metformin may have impacts that accelerate key elements of age-related metabolic degeneration.