What question does this article answer?
Can mild cognitive impairment, an early form of Alzheimer’s, be slowed or reversed through the application of multiple metabolic therapies?
Takeaway:
This case study demonstrates applying a combinatorial therapy including a ketogenic diet, exercise, and brain training can normalize cognitive impairment in a patient with metabolic syndrome while simultaneously improving markers of metabolic health. This study alone cannot tell us whether these improvements were due to the ketogenic diet, exercise, brain training, or the combination thereof. When considered alongside other research in the field and a mechanistic understanding of brain metabolism and neurodegeneration, however, it adds to a growing evidence base that suggests improvements in metabolic health can drive parallel improvements in cognitive health.

This 2018 study evaluated the impact of a metabolic intervention in a 57-year-old woman with mild cognitive impairment.

A 57-year-old female nurse displayed mild cognitive impairment (MCI, a precursor to Alzheimer’s disease) and metabolic syndrome. She was able to continue working and attend regular exercise classes but had difficulty with daily tasks such as remembering names and grocery lists. She had no family history of Alzheimer’s disease and was an otherwise healthy breast cancer survivor.

The patient complied with the prescribed treatment, and her serum ketone levels indicated ketosis (1.1 mg/dL) by the third week.

The primary outcome measured was MoCA score, a tool used to evaluate cognitive impairment (1). MoCA provides a score out of 30, with scores between 26 and 30 considered “normal” (2). At baseline, the patient’s MoCA score was 22, indicating mild cognitive impairment. After two weeks of treatment, the patient’s MoCA score had increased to 25; by the third week of treatment (and beyond), it was fully normalized to a score of 30. These changes were statistically significant.

Multiple markers of metabolic health improved in parallel, with triglyceride levels decreasing more than 50% alongside improvements in HDL and HOMA-IR.

The authors argue these results are consistent with an existing body of evidence suggesting Alzheimer’s is a disease of distorted bioenergetics. The predominant theory of Alzheimer’s disease suggests its cause and progression are linked to the accumulation of amyloid proteins in the brain. An opposing theory proposes age-induced mitochondrial dysregulation and consequent defects in brain metabolism cause neuronal loss, loss of function, and Alzheimer’s (3, 4).

The figure below illustrates the continuous improvement and eventual normalization of this patient over the 12 weeks she followed this metabolic intervention. This single case study does not by itself provide sufficient evidence to suggest the ketogenic diet, exercise, and/or brain training, independently or in concert, can reverse cognitive impairment. However, in light of the magnitude and speed of improvement seen here, the existence of additional research suggesting the same effects in other subjects, and an informed mechanistic understanding that explains how defects in brain metabolism may lead to cognitive impairment, this study makes a clear case for additional research in this area. 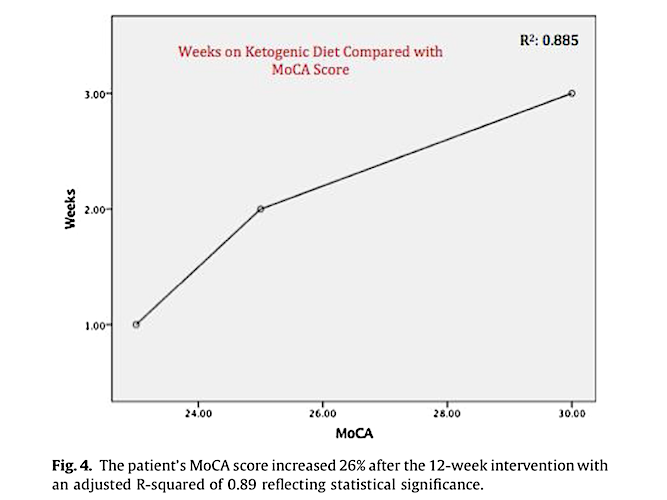