Prior to this 2016 trial by Robert Lustig et al., evidence investigating the metabolic impact of sugar consumption was confounded by four major factors:

This short-term trial was designed to isolate the specific effects of a reduction in dietary fructose on various markers of metabolic health.

Forty-three Latino and African-American adolescents were tested for nine days. All subjects were fed a diet similar to their baseline diet (51% carbohydrate, 16% protein, 33% fat by calories), but the share of total calories coming from dietary sugar was reduced from 27.7% to 10.2%. The exchange was performed by swapping sugar-containing foods for low-sugar or sugar-free substitutes, purchased from local grocery stores. Any caloric deficit was refilled by adding starch to the diet. Subjects were provided all their food, prepared at the UCSF Bionutrition Core, for the duration of the study. This was a single-arm design where each subject served as his/her own control, and the difference between metabolic markers at baseline and at 10 days was used to infer the effect of sugar restriction.

Over 10 days, subjects showed a variety of metabolic changes, mostly improvements, including: 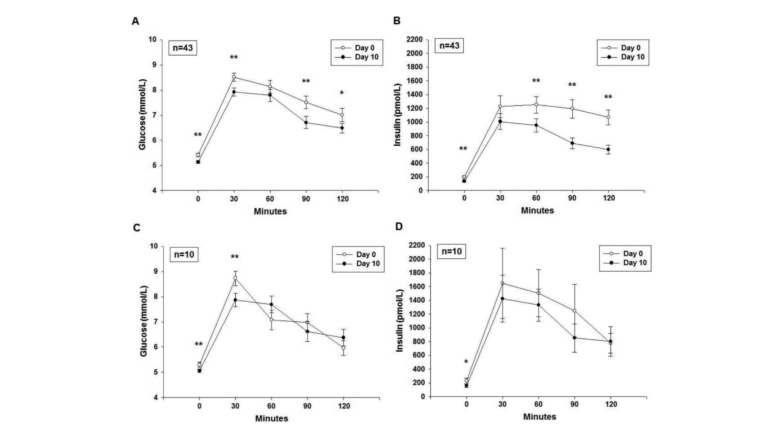 This study provides an especially rigorous test of the hypothesis that dietary sugar restriction has unique and specific metabolic benefits. Subjects were fed a processed-food-based, “kid-friendly” diet that differed from their baseline diets in a single way: less sugar. It is important to note that the subjects received the same amount of calories and the same amount of total carbohydrates as their baseline diets. This single specific change—a reduction in sugar intake—led to a variety of metabolic improvements in only nine days.

Concerns surrounding the role of sugar consumption in chronic disease have previously focused on its caloric equivalence, and its role in fomenting increases in weight. Furthermore, previous clinical studies have relied upon excessive sugar administration, which introduces experimental artifact. This study mitigates all three of these concerns, by intervening in children who are already sick with metabolic syndrome, and by adjusting for effects of calories, weight gain, and adiposity. This study argues that the health detriments of sugar, and fructose in specific, are independent of its caloric value or effects on weight. Further studies will be required to determine whether sugar restriction alone can impact metabolic syndrome in adults, and whether such effects are short-lived or long-term.