Glioblastoma multiforme (GBM) affects an estimated 12,000 Americans per year. The prognosis is poor, with median survival estimated at eight to 15 months. Treatment is multifaceted and aggressive, combining surgery, radiotherapy, and chemotherapy.

Preliminary evidence from basic and mouse models has suggested ketosis may improve current treatments. While normal brain cells can use both glucose and ketones as fuel, many brain tumors lack the enzymes to process ketones and thus require glucose as fuel. Beta hydroxybutyrate, the primary circulating ketone, may also have direct anticancer activity.

Given this evidence, researchers initiated a clinical trial to test the effects of a ketogenic diet alongside radiotherapy in 15 subjects with GBM. This paper discusses only the feasibility of implementing a ketogenic diet; its impact on clinical outcomes has not yet been published.

Patients followed a six-week ketogenic diet, initiated alongside radiotherapy. They followed a 3:1 ketogenic diet — that is, 3 grams of fat were consumed for every 1 gram of carbohydrate or protein, so 87% of calories were from fat. Ten subjects completed the protocol, and none of these subjects experienced any side effects beyond those attributable to chemotherapy and radiotherapy. Subjects drew blood twice daily to ensure blood glucose levels remained below 100 mg/dL and ketone levels between 1-2 mM; if they were outside this range, the diet was modified as necessary. The other five subjects were still undergoing treatment at the time of this paper’s publication.

While all subjects completed the six-week diet successfully, it was not without challenges. Researchers highlighted 12 lessons learned. In brief:

Researchers also found four case reports and five clinical trials previously evaluating the impact of a ketogenic diet in subjects with brain tumors. Two major related issues confound this existing research. First, glucose and ketone levels were not reported and may not have been tracked in most studies. Therefore, it is not known whether some subjects were not actually in ketosis (either due to the dietary prescription or poor adherence). Second, there is no standard definition of the ketogenic diet. Table 2 lists six different forms of the ketogenic diet used in the literature, ranging from the strict 4:1 ketogenic diet in which 90% of calories come from fat to modified diets with as little as 60% of calories from fat. This variance makes it impossible to aggregate results across trials. It also makes it difficult to understand whether positive or negative outcomes in any given trial were due to the ketotic state in general or the specific form of ketogenic diet used. 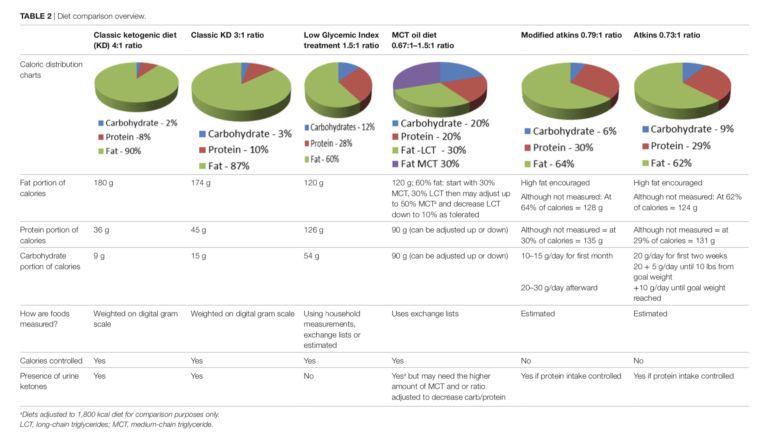 Overall, this article provides guidance to researchers looking to study the ketogenic diet in cancer patients and indicates areas in which the quality and consistency of research can be improved. As it stands, the ketogenic diet remains a promising GBM therapy, but evidence to directly support its use is preliminary.