In this extensive 2019 review, W. Kopp argues the “civilization diseases” — obesity, diabetes, and the conditions associated with them — are the result of Western dietary patterns, and specifically the effect of those patterns on oxidative stress.

There are major dietary differences between a hunter-gatherer diet and a Western diet. The former consists of game, fish, and gathered plant-based foods and nuts. The diets are absent of refined sugars, cereals, and dairy, and all carbohydrates are low-glycemic. A Western diet consists instead of a higher amount of carbohydrates — the majority of which are highly refined — and significantly higher consumption of vegetable oils rich in omega-6. Eating patterns also differ: Paleolithic diets involve a small number of eating occasions each day, while individuals on Western diets typically eat many times each day (2).

These many dietary differences lead to profoundly different glycemic profiles over the course of the day. In a paleolithic diet, the metabolism regularly shifts between two states:

Kopp argues a major consequence of this metabolic state is chronically elevated levels of oxidative stress (OS). The mitochondria produce reactive oxygen species (ROS) as a natural consequence of metabolism; under normal physiological conditions, cells offset production of oxidants with a variety of antioxidant mechanisms (3). When metabolic input are chronically excessive, however, ROS production can outpace these clearance mechanisms. This net ROS buildup can damage DNA, mitochondria, and other cellular components — damage also known as oxidative stress. A Western diet leads to chronic elevation of blood glucose and fatty acid levels, producing just such a metabolic excess. This theory is consistent with evidence indicating high-glycemic diets are associated with high levels of oxidative stress and paleolithic and Mediterranean diets with low levels (4).

Kopp briefly argues the combination of hyperinsulinemia (i.e., chronically elevated insulin), oxidative stress, and insulin resistance (which itself results from OS and hyperinsulinemia) leads to the development of “civilization diseases” including diabetes, cardiovascular disease, neurodegenerative disease, cancer, Graves’ disease, Crohn’s disease, IBD, asthma, psoriasis, and autoimmune diseases. Figure 1 below illustrates broadly how these conditions, as well as inflammation and hyperactivation of the sympathetic nervous system and renin-angiotensin system, are linked; the links between oxidative stress and diabetes were recently discussed on CrossFit.com. 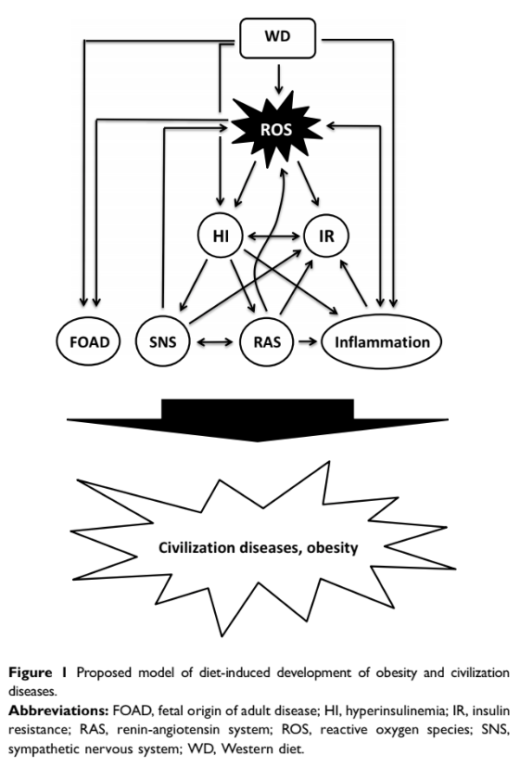 In sum, Kopp argues the nature, volume, and frequency of food consumption in the Western diet all contribute to obesity and “civilization diseases,” moderated by the impact each has on oxidative stress. Consequently, this model would suggest that reducing either eating frequency or refined carbohydrate consumption will prevent hyperinsulinemia, reduce oxidative stress, and consequently prevent or slow development of the “civilization diseases” listed above.