Question
How does fatigue develop, and how does developing fatigue lead to exercise failure?
Takeaway
The traditional, purely biological understanding of fatigue (i.e., that exercise failure occurs when the heart or muscles reach a biochemical limitation) is inconsistent with observed data.

In this 2012 review, Tim Noakes compares two theories explaining how fatigue during exercise leads to failure and explores the history of our understanding of fatigue.

The biological basis for fatigue in exercise was first explored by A. Mosso in 1915 (1). Observing both animals and humans, Mosso concluded fatigue (and the cessation of exertion due to fatigue) was the result of activity in both the brain (i.e., central factors) and the heart and muscles (i.e., peripheral factors):

In raising a weight we must take account of two factors, both susceptible to fatigue. The first is of central origin and purely nervous in character – namely, the will; the second is peripheral, and is the chemical force which is transformed into mechanical work. (pp. 152-153)

According to Mosso, while the contraction of muscles and the heart were the direct source of activity, the brain governed the degree to which these organs worked to support continued movement. He argued fatigue was not an imperfection but a “marvelous perfection” — a feedback mechanism by which the periphery influenced the brain in ways that discouraged a degree of activity that would lead to injury or loss of homeostasis:

The fatigue increasing more rapidly than the amount of work done saves us from the injury which lesser sensibility would involve for the organism. (p. 156)

Mosso’s work was largely forgotten until the mid-2000s, when it was surpassed in influence by that of Archibald Vivian Hill and his colleagues at the University of London (2). In the early 1920s, Hill, a muscle physiologist, developed an alternative theory of fatigue that discounted the role the brain played in regulating continued activity (3). Hill argued exercise is terminated when the oxygen demand of muscles exceeds their oxygen supply. The oxygen supply to muscles is regulated by the ability of the heart to pump an oxygen-rich blood supply to these muscles. The ability of the heart to supply ever-larger amounts of blood to muscles increases until the heart itself becomes ischemic and contractile force plateaus. In other words, maximal cardiac capacity is the absolute limiting factor of exercise, and the brain plays no direct role in determining maximal performance (4). Hill’s model is summarized in the figure below. 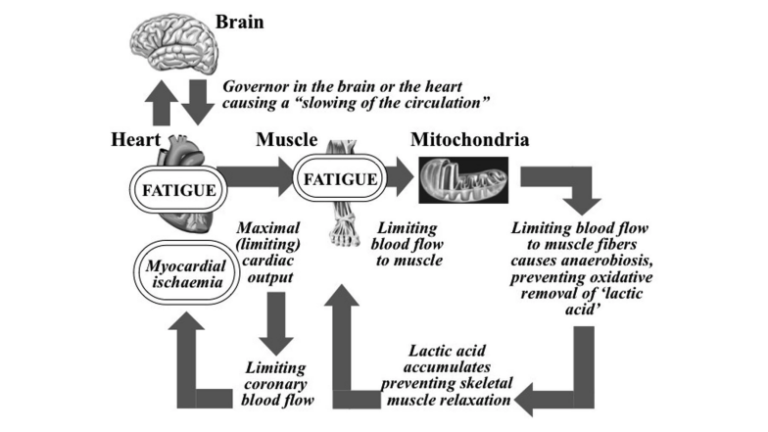 Figure 1: Hill’s original model. While his early work included some role for the brain as a “governor,” this component was lost in later versions.

Hill’s work became the dominant model of exercise science from the early 1930s onward (5). As an example, the Journal of Physiology described the regulation of maximal performance through an entirely periphery-centric lens in its ceremonial 2008 Olympic Games edition:

[T]he primary distinguishing characteristic of elite endurance athletes that allows them to run fast over prolonged periods of time is a large, compliant heart with a compliant pericardium that can accommodate a lot of blood, very fast, to take maximal advantage of the Starling mechanism to generate a large stroke volume. (6)

Despite its influence, Hill’s model seems incompatible with a variety of uncontroversial observations by athletes, coaches, and exercise scientists.

First, Hill’s model allows no role for the symptoms of fatigue. If the purely biochemical system Hill describes is sufficient to protect the body from damaging overexertion, why would the body develop additional systems to make exertion and fatigue painful? The pain response suggests an adaptation specifically to discourage continued exertion even when such exertion is possible.

Third, Hill’s model suggests all maximal exercise would involve maximal cardiac output and skeletal muscle anaerobiosis (i.e., the muscles entering an anaerobic state in which oxygen demand exceeds supply). This is not the case (8).

Fourth, athletes pace themselves. Athletes do not maximize exertion at all points during exercise; they reduce exertion during longer exercise bouts and increase intensity during shorter exercise bouts. This clearly involves central regulation of the level of exertion.

Fifth, athletes often increase their exertion during the final 10% of an exercise bout, or the “end spurt.” Hill’s model would project the opposite: that athletes would be most depleted and least able to increase exertion at this point (9).

Finally, and most critically, the two biological factors Hill and those citing his work argue limit exercise are not present in most cases of maximal exertion. During maximal exertion, it is neither consistent that the muscles become anaerobic (i.e., that muscular oxygen demand exceeds supply) nor that oxygen consumption plateaus (as would be expected if maximal cardiovascular output were the limiting factor) (10). In prolonged exercise, only 35-50% of muscle mass has generally been recruited at the point of failure (11), and even during maximal exertion, only 60% of muscle mass is recruited.

Noakes proposes an alternative model — the “central governor” model as opposed to the “brainless” model — rooted in the observations of coaches, athletes, and neuroscientists (13). This model, like Mosso’s original work, argues both peripheral (the muscles and heart) and central (the brain and nervous system) factors govern fatigue and failure — i.e., as S. C. Gandevia claims, “Human muscle fatigue does not simply reside in the muscle” (13, “Spinal”). This model, if accurate, makes clear that Hill’s model is at best incomplete and may be entirely unhelpful.

The central governor model, summarized in Figure 2 below, places the brain at the center of regulation. As exercise begins, the brain determines how many motor units to recruit based on a variety of psychological and physiological factors, including motivation, recovery state, emotional state, and fatigue (14). As exercise continues, the brain regulates exertion to a rate that can be maintained for the expected duration of the activity. This pace is continually regulated, contraction by contraction, based on a variety of internal and external factors, including the sensation of fatigue (15). Note this model, unlike Hill’s, explains both “end spurt” behavior and the observation that non-physiological factors such as financial incentives and a competition setting can increase performance (16). 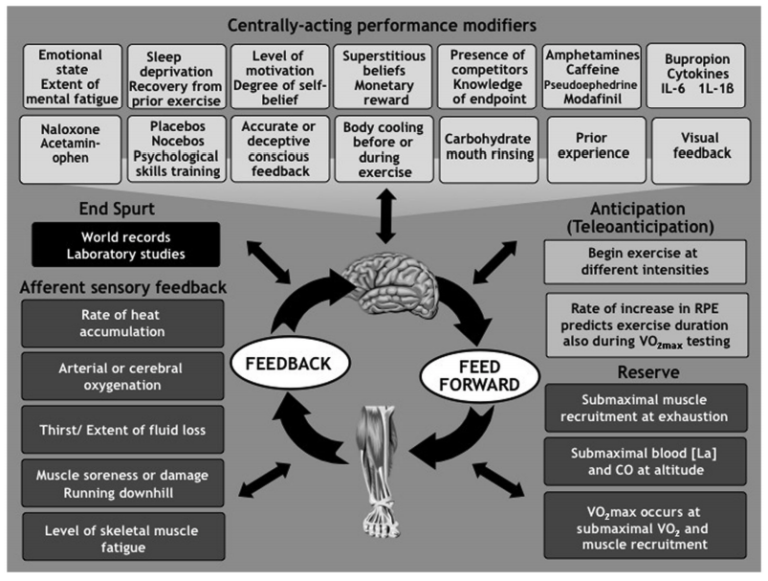 Figure 2: In the central governor model of exercise regulation, the brain continually monitors and modifies the number of motor units recruited to drive continued activity. The brain generates illusory, unpleasant sensations of fatigue to discourage exertion that may jeopardize homeostasis. Athletes best able to overcome these illusions are able to maximize performance (17).

Crucially, this model characterizes fatigue as an emotion uniquely experienced by each individual (18) and used by the brain, based on the feedback the brain receives from the periphery, to regulate performance (19). Failure, in this model, occurs not when a strict biological point of failure occurs but when the psychic demand of maintaining a given perceived state of fatigue can no longer be maintained and exercise intensity is voluntarily reduced.

As anecdotal support, Noakes presents the testimonies of world-record-setting distance runners, each of which argue the brain, not the body, is the primary moderator of performance:

The human body is centuries in advance of the physiologist, and can perform an integration of heart, lungs, and muscles which is too complex for the scientist to analyse … . It is the brain not the heart or lungs, that is the critical organ, it’s the brain.  — Dr. Roger Bannister (20)

Mind is everything. Muscles are pieces of rubber. All that I am, I am because of my mind. —Paavo Nuurmi, winner of nine gold and three silver medals

Together Cerruty and Elliott have brought athletics to the threshold of a new era. They have proved conclusively that not only the body but also the mind must be conquered. —Derek Ibbotson, coach of Australian world record holder Herb Elliot (22)

The difference between my world record and many world class runners is mental fortitude. I ran believing in mind over matter. —Derek Clayton, former world record holder (23)

Hill’s model suggests the difference between the winner of a race and the individual finishing second is purely biological, the consequence of the objective strength of each athlete’s cardiovascular and muscular systems. The central governor model instead suggests the winning athlete is the one who is more capable of overcoming their unique fatigue response. This model accounts for the complex interaction of both central and peripheral factors in performance and seems to be more consistent with the observed data.