This 2019 review assessed the impact of dietary supplements and patterns on cardiovascular risk and mortality.

Researchers combined data from 10 meta-analyses (plus four additional randomized controlled trials), which in total surveyed 277 trials and 922,129 subjects. Each trial included was a randomized controlled trial testing the effect of one or more dietary factors on heart disease incidence (i.e., the rate of heart attacks, strokes, and similar events), heart disease mortality, or overall mortality. After pooling all the data, the researchers evaluated the relationship between each of the following dietary factors with these outcomes: 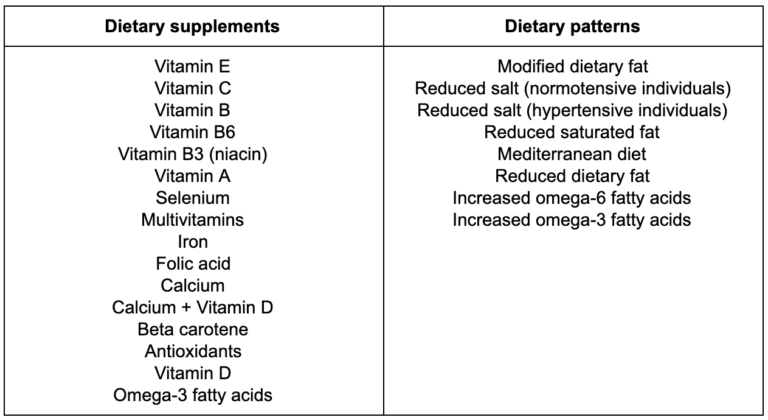 The researchers did not find any meta-analyses or trials meeting their inclusion criteria testing the impact of low-carbohydrate diets on these outcomes, so this pattern was not assessed.

Notably, neither the Mediterranean diet nor any diet focused on modifying the amount or type of fat in the diet had any significant impact on overall mortality, cardiovascular mortality, or cardiovascular risk.

The authors observe that even these few correlations come with caveats.

Low-salt diets, as previously noted on CrossFit.com, have been the subject of multiple recent analyses, with some studies indicating low-salt diets have beneficial effects on mortality and some indicating the diet has no effect or can even harm some subjects. Here, it is worth noting the authors of the meta-analysis used to assess the impact of salt restriction on mortality and cardiovascular outcomes described their results as having “insufficient power to confirm clinically important effects of dietary advice and salt substitution on cardiovascular mortality in normotensive or hypertensive populations” (1). They also noted that even the analysis’ meager results were largely driven by a single trial.

Similarly, the benefits of folic acid on cardiovascular risk were driven mostly by research in Chinese populations, where folic acid deficiency is more common than in the United States or Europe.

These various findings are summarized in the forest plots and chart below, which respectively show the magnitude of impact of each dietary factor on overall and cardiovascular mortality, and the direction of impact of all factors on all outcomes. 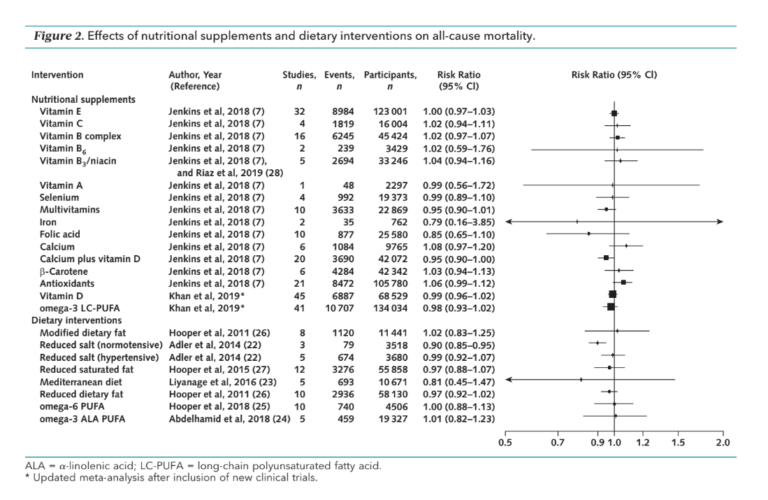 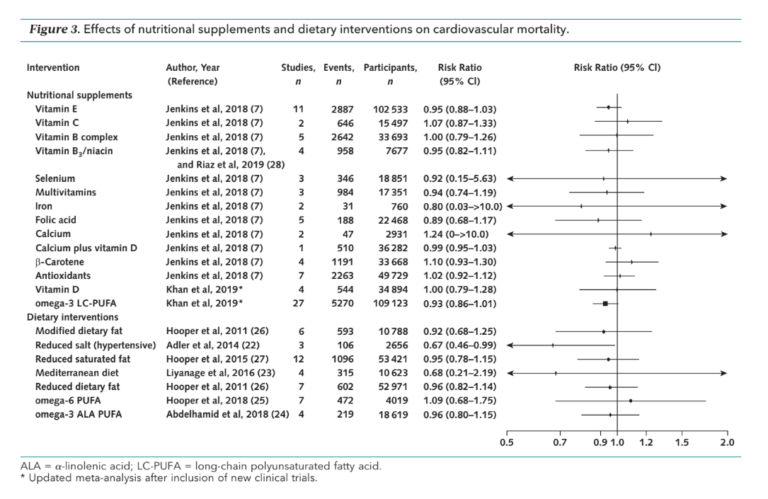 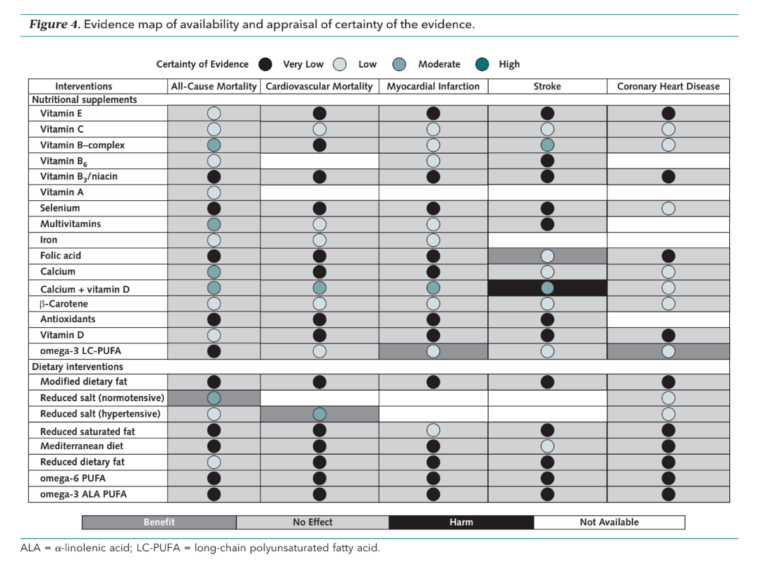 Overall, this study consistently found no evidence to support cardiovascular or lifespan benefits associated with common dietary supplements or a variety of fat- and salt-modifying dietary patterns among the general population. In other words, the purported benefits of these dietary factors appear to be unsubstantiated, at least when exclusively looking at randomized controlled trials.

In an accompanying editorial, Dr. Eric Topol and others reiterated that this trial failed to find support for the supplement market (which they estimate at $300 billion in annual sales) and a number of dietary interventions that are widely prescribed to reduce heart disease risk. They suggest specific individuals may benefit from these diets and supplements, but the evidence shows none of these interventions, applied broadly to the population as a whole, would be expected to reduce heart disease incidence, cardiovascular mortality, or total mortality.

Anahad O’Connor, writing for The New York Times, reached similar conclusions. He drew particular attention to the lack of benefit associated with multivitamins and omega-3 supplements, which are among the most popular supplements in America due to their purported — and possibly illusory — health benefits.