Previous research has suggested intermittent fasting drives metabolic benefits independent of weight loss, including improvements in insulin sensitivity, lipid profile, liver fat, and markers of inflammation and oxidative stress (1). Similarly, some researchers attribute the dramatic glycemic improvements observed after bariatric surgery to the calorically restricted diet patients follow before and after surgery rather than the surgery itself (2).

In this 2018 trial, researchers assessed the metabolic benefits of a specific form of intermittent fasting, which they termed “early time-restricted feeding” (eTRF). The eTRF diet restricts all food intake to a six-hour window each day, thus requiring an 18-hour daily fast. Insulin sensitivity is higher in the morning than in the evening; as a result, researchers argue eTRF provides the benefits of intermittent fasting in a form most aligned with our circadian rhythms, and one designed to minimize overall glycemic response.

This was a small trial, designed as a proof-of-concept. Eight men followed two five-week diets in randomized order with seven weeks between diets. During one phase, they ate a control diet in which lunch was eaten six hours and dinner 12 hours after breakfast (e.g., breakfast at 6 a.m., lunch at noon, and dinner at 6 p.m.). During the eTRF phase, lunch and dinner occurred within a six-hour window after breakfast (e.g., breakfast at 6 a.m., lunch at 9 a.m., and dinner at noon). The dietary composition and number of calories consumed were identical across both diets, so the time of food consumption was the only variable.

Figure 1: Meal timing interventions. An example schedule for a person who eats breakfast at 7 a.m.

The eTRF diet did not affect fasting blood glucose levels or mean blood glucose levels during an oral glucose tolerance test (OGTT). However, eTRF reduced insulin levels during the OGTT, which suggests a lower dose of insulin was required to drive the same level of glucose uptake and metabolism. In other words, insulin sensitivity was improved. Beta cell function and responsiveness — i.e., the sensitivity of the pancreas to increases in blood glucose — were also improved. 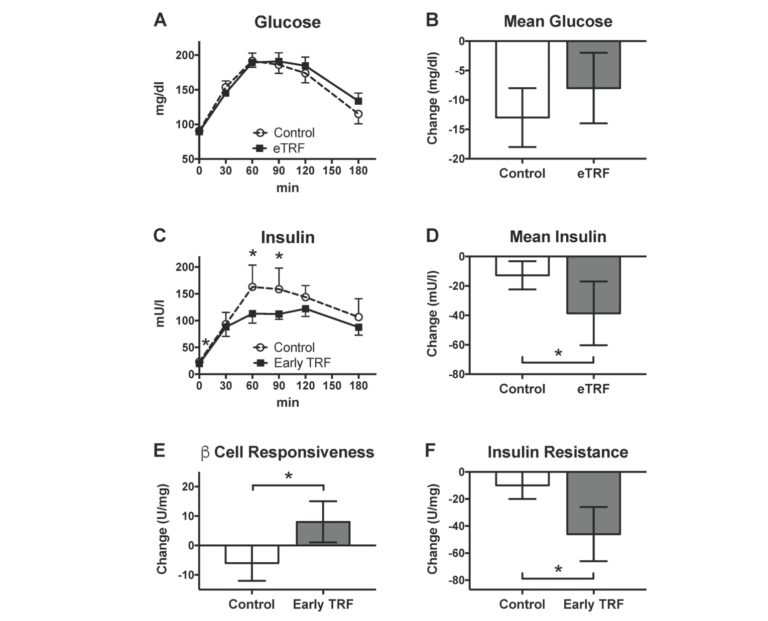 Figure 2: Glycemic Control. eTRF did not affect (A) individual or (B) mean values for glucose during a 3-hour OGTT. However, eTRF did lower (C) insulin levels at multiple time points and (D) mean insulin levels. Overall, eTRF improved (E) β cell responsiveness and (F) insulin resistance, as measured by the insulinogenic index and the incremental AUC ratio, respectively (Postintervention values shown above for (A) glucose and (C) insulin were adjusted for differences at baseline.) All data are paired, with N=8 completers in each arm. Data are presented as least squares mean ± SEM, with the exceptions of panels A and C, which display the data as raw mean ± SEM. * p ≤ 0.05.

Additionally, blood pressure and markers of oxidative stress were reduced while subjects were following the eTRF diet. The decrease in blood pressure (11/10 mm Hg) was equivalent to that seen with anti-hypertensive medication (3).

The eTRF reduced multiple measures of evening hunger and appetite, including desire to eat and capacity to eat; subjects following an eTRF reported increased fullness in the evening. Subjects also reported the most difficult part of the eTRF was not fasting for 18 hours but eating three meals within six hours. Most importantly, all eight participants were willing to follow a time-restricted feeding schedule in their daily lives if it was shown to improve their health.

This small, tightly controlled trial (4) provides preliminary evidence that eTRF can drive metabolic benefits independent of the number or type of calories consumed. Future research can test whether these metabolic benefits can be improved further through changes to the composition of the diet or addition of exercise, or how eTRF compares to other fasting regimens within larger populations.