This small trial tested the effects of a particular form of intermittent fasting on metabolic markers.

Eleven subjects were randomized to one of two four-day diets. Both diets contained the same number of calories and were comprised of 50% carbs, 35% fat, and 15% protein. Both contained three meals, but the timing differed. On the control arm, subjects ate at 8 a.m., 2 p.m., and 8 p.m. On the test diet — termed eTRF for early time-restricted feeding — the three meals were at 8 a.m., 11 a.m., and 2 p.m. Subjects were not allowed to consume snacks, so the control group experienced a nightly fast of 12 hours (8 p.m. to 8 a.m.) while the eTRF group fasted for 18 hours (2 p.m. to 8 a.m.). Blood was drawn in the morning before breakfast and again at 8 p.m., just before dinner in the control group. Blood glucose levels were continuously monitored.

Figure 1: Study Protocol. Eleven participants were randomized to eat between 08:00 and 20:00 (control arm) or between 08:00 and 14:00 (early time-restricted feeding (eTRF) arm) for 4 days and then crossed over to the other arm after a 3.5–5-week washout period. On day 4, they consumed 3 identical meals that constituted one-third of their daily energy requirements, while undergoing 24-hour continuous glucose monitoring. In addition, blood was drawn in the evening (PM) on day 3 and in the morning (AM) on day 5 to measure serum analytes and gene expression.

As expected, the 24-hour glucose profiles differed significantly between groups. The eTRF group showed continually elevated blood glucose levels between 8 a.m. and 2 p.m., but blood glucose levels remained low and flat overnight between 8 p.m. and 8 a.m. Controls showed greater variation throughout the day but also had a large dinnertime glucose spike that did not fully subside until 2 a.m. (halfway through sleep). 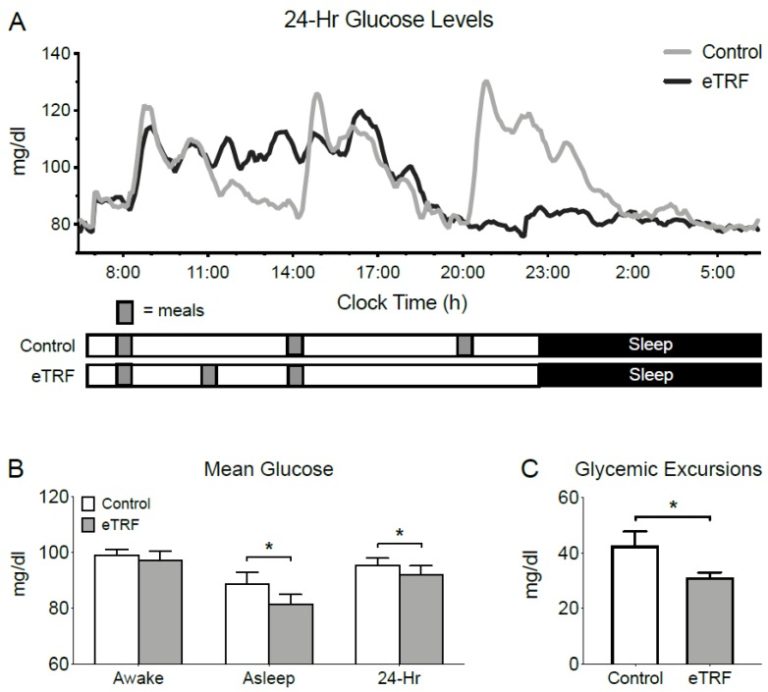 There were some small additional differences in metabolic markers between the two groups, including higher ketone levels in the morning in the eTRF group. While the treatment group also showed higher glucose and insulin levels at 8 p.m., this observation is difficult to interpret, because this group had consumed all three meals by the time of the nightly blood draw while the control group had not yet consumed dinner. Longer studies may determine whether changes in markers related to aging, circadian rhythm, and other factors have clinical significance over time.

In sum, this interesting but preliminary trial shows time-restricted feeding does meaningfully change glucose profile over the course of the day and may change some metabolic markers, even over short periods. Longer studies will help determine whether this different metabolic profile — most markedly distinguished by a greater share of each day being spent at low blood glucose levels — has significant impact on health or disease markers.