Adipose tissue is the body’s battery. Humans eat irregularly and almost always consume more calories than can immediately be used for the energy of life; the excess is stored to be used later. When later comes, whether it is a few hours or a few days, the body accesses the stored fuel to maintain its activities. All this has been known for ages, but it has been only fairly recently that the signals for the storage and release of stored energy have been elucidated.

Since the maintenance of a steady flow of fuel is crucial during fasting, the proper regulation of lipolysis, the release of fat from adipose tissue, is essential to survival. But what regulates lipolysis during fasting? Is it simply the decrease in caloric intake? A decline in blood glucose? Falling insulin levels? A burst of glucagon? An increase in epinephrine? All these phenomena occur, but which ones drive the metabolic response to fasting?  Do they all work in concert? Or do just one or two drive the response? These are the questions Samuel Klein and Robert Wolfe asked in their seminal study published in 1992 (1).

Years before Klein and Wolfe, Walter Bloom wondered about some of the same issues. He performed a study in the late 1950s on nine subjects who were fasting under hospital conditions (2). He found these subjects lost weight at greater rates than their decreased energy intake would account for, and they did so easily and without significant side effects. A few years later, Bloom and Gordon Azar evaluated subjects on extremely low-carbohydrate diets and found them to have lost the same amount of weight as those who were fasting in Bloom’s previous study. Bloom suggested the metabolic changes seen in fasting were brought about not by the reduction in food intake in general but by the reduction in carbohydrate intake (3). He noted the subjects in the extremely low-carb diet study became fatigued, whereas those in the earlier fasting study did not. But — and this is a crucial point — those in the low-carb study were normal weight, and those in the fasting study were overweight, having plenty of their own body fat to draw on to supplement their calorie needs. The latter study was also done decades before anyone had determined that, in terms of exercise output in normal-weight subjects on a carb-reduced diet, a period of low-carb adaptation is required. As a tangential point of interest, Dr. Robert Atkins relied heavily on the findings of Bloom and Azar in developing his famous dietary regimen.

Aside from weight loss, the Bloom and Azar studies had looked at electrolytes and a handful of other parameters but not the ones Klein and Wolfe were pondering. Klein and Wolfe had already determined in an earlier study that maintaining euglycemia via low-dose glucose infusion did not prevent the increased lipolysis seen in fasting, so lowering glucose wasn’t the trigger. They designed a study to try to pinpoint the factor or factors responsible for the metabolic findings in fasting.

They recruited five healthy, normal-weight, male subjects with a mean age of 24 to participate. The subjects were to serve as their own controls in a randomized crossover fashion in two study protocols separated by a three-week washout period.

Upon admittance to the research center, subjects underwent an overnight (12-hour) fast, then had blood samples taken and IVs started for isotope infusion and arterial blood sampling. After this 12-hour fast, one group was randomized to continue fasting for the next 72 hours (84 hours total), while the other group underwent a continuous infusion of Intralipid, a commercial lipid (i.e., fat) emulsion, at a rate calculated to maintain their measured resting metabolic rate. Lab values were obtained after the experiment.

When looking at just the fasting arm of the study, it would be reasonable to expect a large difference in numerous parameters between the start of fast and the end of it. And it would be reasonable as well to find at the end of the study a difference in outcomes between those who went without food and those whose caloric needs were met by the infusion of lipids.

As expected, when subjects fasted, their glucose levels fell along with their insulin levels. Free fatty acid levels went up and ketone levels increased markedly. But the surprise was that both the fasting group and the lipid infusion group ended up about the same. As can be seen from the table below, the only significant changes were between starting either of the protocols and finishing it but not between protocols. 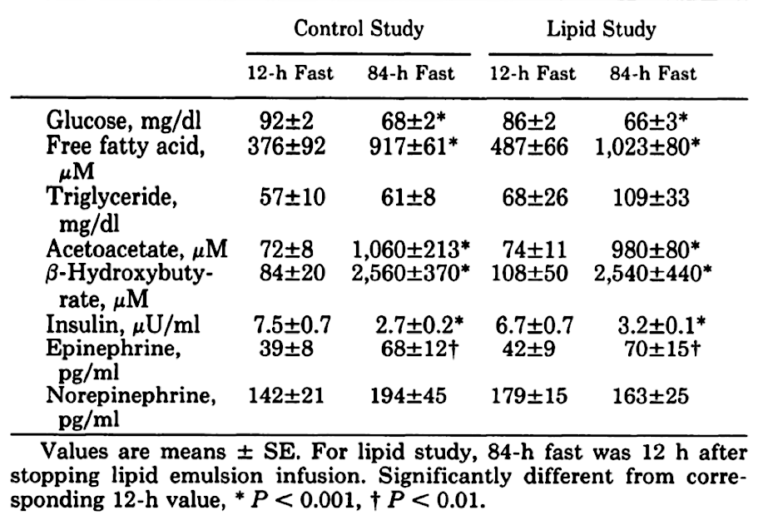 These findings come as somewhat of a surprise. Although it makes sense that glucose and insulin would fall significantly and free fatty acids and ketones would increase, it would seem that three days’ worth of calories in the lipid infusion would generate some difference when compared to a total fast.

What about weight loss? 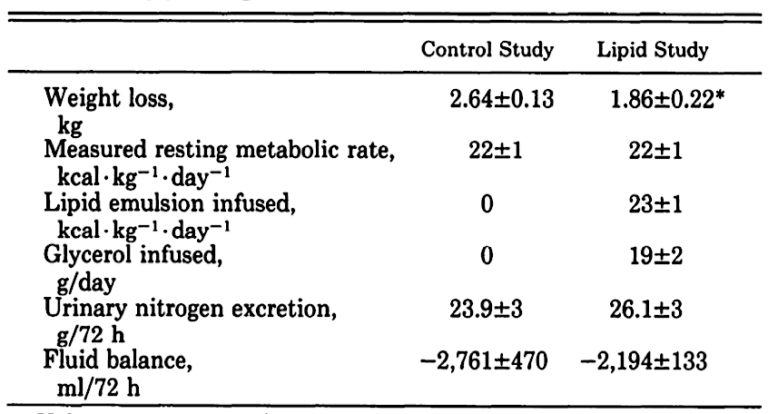 As can be seen, once the difference in fluid balance between those getting the IV infusion and those fasting has been accounted for, the weight loss is similar.

I saw Wolfe present this data prior to publication of this paper with Klein, and, although I drew different conclusions from their findings than they did, their work helped persuade me that I was on the right track using a low-carb diet to help my obese, diabetic, and otherwise metabolically deranged patients. It made me realize that my patients could continue to eat to quell hunger, while at the same time experiencing most of the benefits of fasting, including weight loss, so long as what they ate was mostly fat and protein.

As Klein and Wolfe, echoing Bloom and Azar from decades earlier, explain:

These results demonstrate that restriction of dietary carbohydrate, not the general absence of energy intake itself, is of fundamental importance in the adaptive response to short-term fasting.

Where my thinking diverges from theirs can be found in their conclusion:

In summary, the present study underscores the importance of carbohydrate intake for normal fuel homeostasis. (my italics)

“Normal,” perhaps, in today’s world of plentiful high-carb food, but humans didn’t evolve in such a world, so, in my view, the finding in the subjects at the end of the three-day lipid infusion would seem to be more “normal” and in keeping with how humans evolved over millennia. Other than the last few thousand years after the advent of agriculture, humans, in most of Europe at least, existed for thousands of years primarily in a carnivorous environment, absent the copious amounts of carbohydrate available today.  The carbohydrate they could gather was seasonal, so their diet was closer to the lipid-infusion arm of the study. The high-carbohydrate diet most of the Western world follows today would have been highly abnormal during most of our species’ time on Earth (4-7).

Dr. Michael Eades was born in Springfield, Missouri, and educated in Missouri, Michigan, and California. He received his undergraduate degree in engineering from California State Polytechnic University and his medical degree from the University of Arkansas. After completing his medical and post-graduate training, he and his wife, Mary Dan, founded Medi-Stat Medical Clinics, a chain of ambulatory out-patient family care clinics in central Arkansas. Since 1986, Dr. Michael Eades has been in the full-time practice of bariatric, nutritional, and metabolic medicine. He and his wife have been in private practice devoting their clinical time exclusively to bariatric and nutritional medicine, gaining first-hand experience treating over 6,000 people suffering from high blood pressure, diabetes, elevated cholesterol and triglycerides, and obesity with their nutritional regimen.