CrossFit | Diabetes: Have We Got It All Wrong?

These two 2012 reviews — one by Barbara Corkey, Ph.D., and the other by Walter Pories, MD and FACS, and G. Lynis Dohm, Ph.D. — both argue the root cause of diabetes is excessive levels of insulin, and insulin resistance is a secondary rather than primary cause.

Since the 1960s, the prevalence of diabetes in the U.S. population has increased from ~5% to more than 15% (1). Current standard-of-care treatments include diet and exercise to reduce weight and use of oral hypoglycemic medications like metformin or injected (exogenous) insulin to reduce blood glucose levels. These treatments are unable to reverse the condition; for nearly all diabetics, diabetes is a lifelong condition that worsens over time, leading to the deterioration of cardiovascular, neurological, optical, and kidney function (2).

As Corkey notes, “These realities indicate that both our understanding of the disease and our treatment of the disease are inadequate. Current approaches are not working” (2432).

The clinical manifestations of diabetes may be explained by an opposite causal pathway. Elevated insulin levels have been shown to cause insulin resistance in the liver, peripheral tissues (i.e., fat and muscle), and brain (3); the latter has been linked to ineffective satiety signals, which leads to overeating. Mouse and human studies (4) have shown that dosing healthy subjects with insulin leads to development of insulin resistance and obesity. If hyperinsulinemia (i.e., high insulin levels) are the primary cause of diabetes, insulin resistance is a downstream consequence, with muscle and fat cells becoming insulin resistant to avoid taking up too much glucose from the blood and causing hypoglycemia. Figure 1 below, from Corkey’s paper, summarizes the ways a primary defect in insulin secretion could lead to the other clinical observations commonly associated with diabetes. 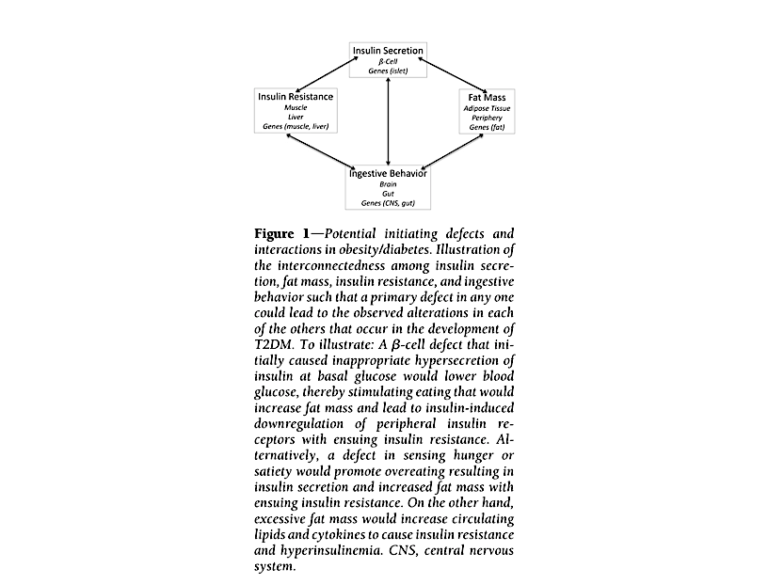 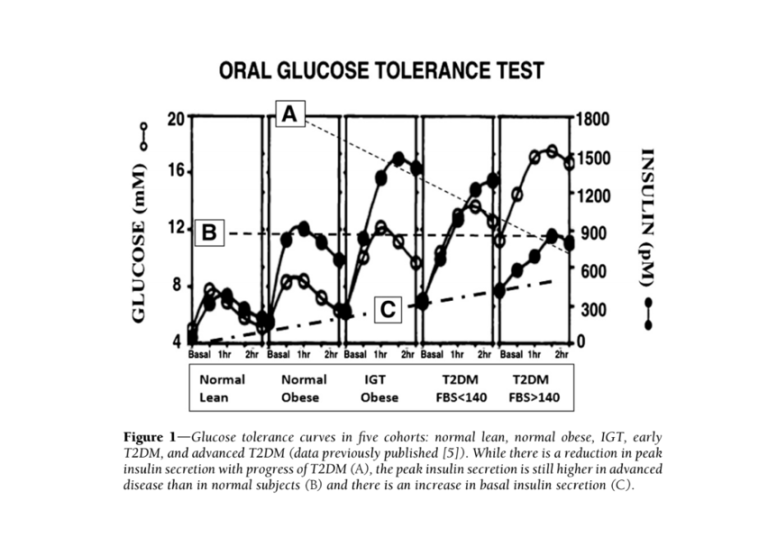 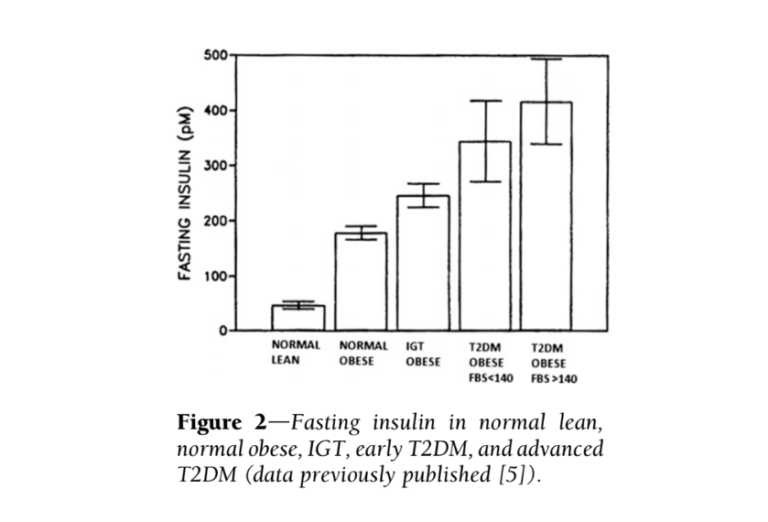 Taken together, this evidence suggests high insulin levels directly contribute to the development and/or progression of diabetes. If this is true, it suggests elements of the standard-of-care treatment, particularly the use of injected insulin to achieve normal blood glucose levels, are counterproductive and in fact contribute to diabetes progression.

As Pories notes, “We do not treat hyperthyroidism with thyroxine or Cushing syndrome with cortisone; should we be treating T2DM, a disease characterized by hyperinsulinemia, with insulin?” (2442).

Corkey argues this initial increase in insulin secretion may be the result of factors introduced to our diet and environment since the 1960s, such as pesticides and plastics. These factors, she argues, cause oxidative damage to pancreatic beta cells and lead to hypersecretion of insulin even when blood glucose levels are normal (7). Pories instead argues hyperinsulinemia results from defective signaling between the gut and pancreas, as evidenced by the rapid resolution of hyperinsulinemia and other clinical symptoms of diabetes after roux-en-y gastric bypass surgery, which rearranges the gut in ways that directly affect relevant signaling pathways (8).

While these two specific explanations are preliminary, the broader hypothesis that diabetes is a disease driven by both hyperinsulinemia and hyperglycemia — and that interventions that increase insulin to control glucose therefore may be counterproductive — is well substantiated. This hypothesis would suggest interventions that specifically reduce blood insulin levels, such as dietary carbohydrate restriction, may be particularly effective in preventing the progression of or even reversing diabetes.