CrossFit | The Bones of the Skull

The skull is supported directly upon the vertebral column. It is the most superior component of the axial skeleton. It is comprised of 22 closely associated bones that can be divided into two groups: (1) bones of the cranium (those that surround the brain) and (2) bones of the face (those that support the eyes, nose, and mouth). All the bones of the skull, with the exception of the lower jaw, are connected at joints called sutures. These irregular, jagged junctions become quite immovable in adults and, over the lifespan, may completely ossify and disappear. However, they are malleable in fetal development (to enable the head’s passage through the birth canal) and early childhood.

Below are descriptions of 10 of the bones of the skull (Figure 1): 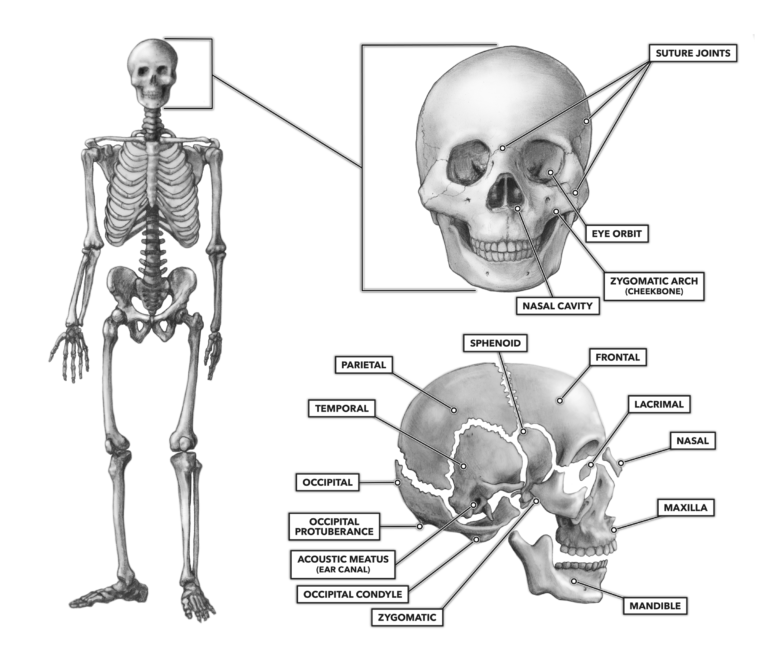 Figure 1: Bones of the skull

Mandible – The mandible is the jaw, and it is the bone into which the lower teeth are set. It articulates bilaterally with the temporal bone to form the temporomandibular joints. The mandible moves when the mouth is opened and closed. It is the most freely moving and least stable bone in the skull. Not surprisingly, it is one of the most frequently fractured skull bones.

Maxilla – The maxilla is the bone into which the upper row of teeth is set, and it forms the roof of the mouth. It also creates the most medial aspects of the cheekbones.

Zygomatic bone – This bone forms the lateral and posterior component of the cheekbones; it is the most curved portion. It articulates with the frontal, sphenoid, maxilla, and temporal bones. These get broken in boxing and MMA bouts due to strikes and kicks to the face.

Nasal bone – The nasal bones are two small bones that vary in size and shape in different individuals. They create the bridge of the nose, sitting above the nasal cavity, and flank the midline of the nose just anterior and inferior to the frontal bone.

Lacrimal bone – This small bone sits in the medial wall of the eye orbits. It contributes to the process of lacrimation (production of tears) by enabling directional flow.

Frontal bone – This is the large bone that comprises the human forehead and also creates the upper ridge and roof of the eye orbit (eye socket). It roughly occupies the area from the eyebrows to just behind the superior hairline. Laterally, it extends from just superior and anterior to the area we commonly refer to as the temple. The single frontal bone articulates with the two parietal, nasal, ethmoid (not pictured), maxilla, and zygomatic bones on each side of the skull.

Sphenoid bone – While the sphenoid looks to be a bilateral pair of bones when looking at a complete skull, it is actually a single bone that spans the skull from side to side. It is one of the seven bones that articulate to create the eye orbit. The superficial aspect of the sphenoid lies just posterior to the bony ridge above the eye orbits.

Occipital bone – The occipital is a roughly saucer-shaped bone at the back and lower part of the skull. The foramen magnum is located approximately two-thirds down the length of the bone and directly medial. The cranial cavity (space inside of the skull) communicates with the vertebral canal (through which the spinal cord runs) via this foramen. 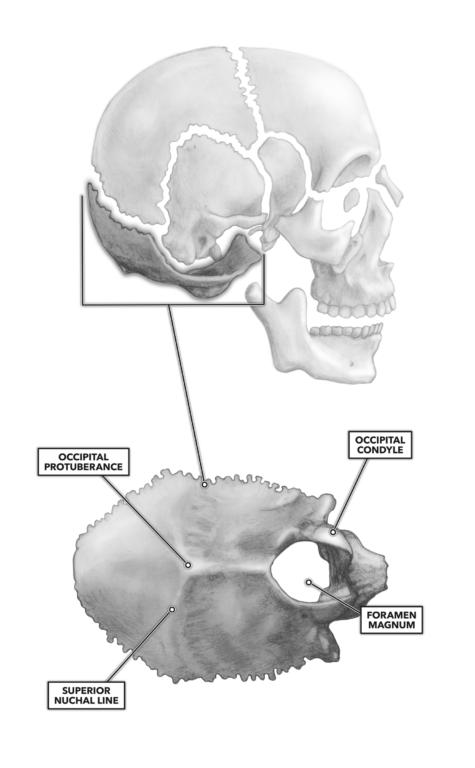