Neurodegeneration will develop in 29% of diabetics at some point in their lives (1). Brain insulin resistance is associated with Alzheimer’s disease and cognitive impairment, and the regions of the brain most closely associated with Alzheimer’s pathology — the hippocampus, hypothalamus, and cortex — are also the regions richest in insulin receptors (2). The review authors argue these associations may be causal and explore ways hyperglycemia and impaired brain insulin signaling may directly contribute to cognitive decline and Alzheimer’s disease.

Insulin signaling in the brain triggers neuronal development and synaptic plasticity, while impaired insulin signaling is associated with reduced vascular development (3). Decreased vascular development can itself lead to neuronal inflammation and synapse loss by impairing nutrient transport to and from brain cells (4). Broadly, insufficient insulin activity in the brain and hippocampus specifically has been associated with neurodegeneration, cognitive impairment, and impairments in memory formation (5).

As summarized in the figure below, impairments in the insulin signaling cascade — which involves activation of IRS-1, PI3K, Akt and a variety of other proteins and enzymes — can also be directly linked to multiple elements of Alzheimer’s pathology, including the accumulation of amyloid beta (AB) plaques and hyperphosphorylated tau neurofibrillary tangles (NFTs). 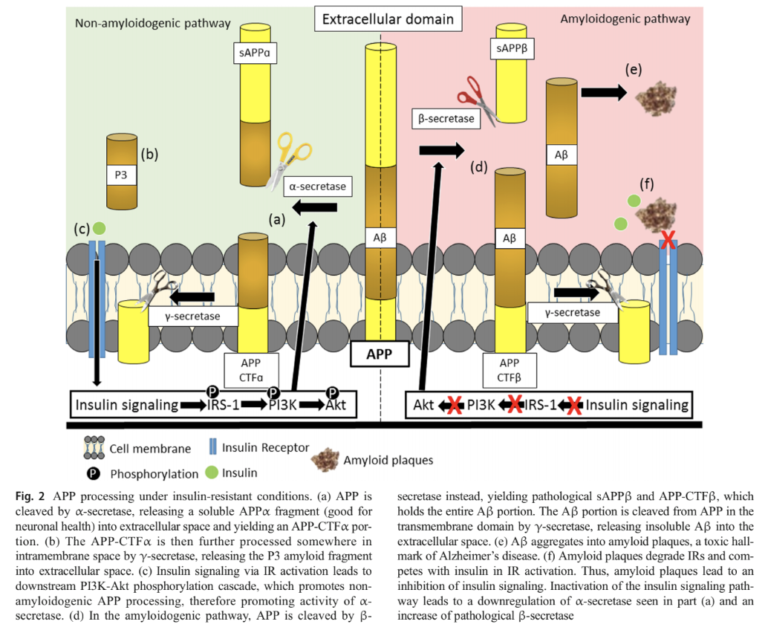 Notably, ApoE4, the strongest genetic risk factor for Alzheimer’s, leads to insulin resistance by decreasing the availability of insulin receptors at the cellular level (9).

The majority of the data supporting these mechanisms has been drawn from animal and in vitro models, thus reflecting the preliminary nature of the hypothesis. Taken together, this early research nonetheless illustrates a variety of mechanisms by which diabetes and/or insulin resistance could directly contribute to the development of Alzheimer’s disease.

Takeaway: Research on the link between insulin resistance and Alzheimer’s disease remains promising but preliminary. However, given the lack of viable alternatives to prevent or treat Alzheimer’s disease and the failure of other theoretical frameworks to deliver clinical improvements, the hypothesis that Alzheimer’s is at least partially the result of insulin resistance, hyperglycemia, or the downstream consequences thereof deserves further exploration.