He wasn’t breathing. His heart wasn’t even beating.

But interred beneath a tangle of crimson tubes, he lived, his blood flowing into an artificial lung to be stripped of carbon dioxide, re-oxygenated, warmed, and returned to his body.

“That was the most horrific thing I have ever seen,” Sarah Brown, Rufus’ wife, recalled. “He looked like a corpse.”

Rufus, then 53, had tested positive for COVID-19 20 days prior, entering the hospital on Aug. 5, 2021. Doctors treated him at first with a round of newly approved experimental antivirals, and he showed some improvement.

“And then one day, it just turned bad,” he said.

Despite the aid of high-flow oxygen therapy, Rufus’ oxygen level — then at around 84% — wasn’t budging. The pulmonologist told him he would need to be intubated and placed on a ventilator.

“I’m not going on a ventilator,” he told the pulmonologist.

“Then you need to prepare to die,” she responded.

He asked for a moment to consult with his wife.

“Basically, I lied to him.” 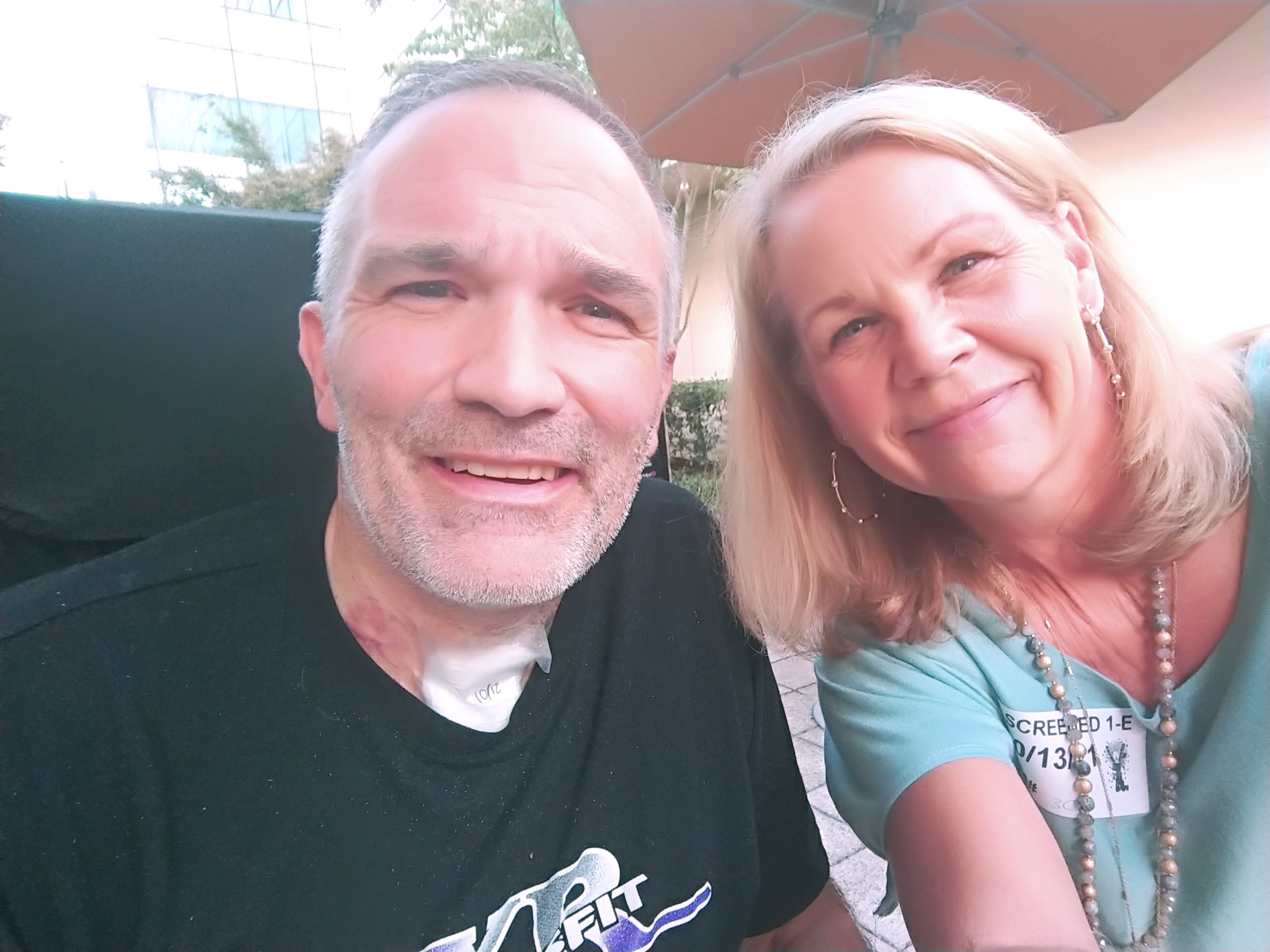 The World Health Organization reports that since the start of the COVID-19 pandemic, there have been 613,942,561 confirmed cases of COVID-19 and 6,520,263 resulting deaths. A 2021 meta-analysis found that of 57,420 adult COVID-19 patients who received invasive mechanical ventilation, nearly half died.

Rufus never imagined he might be one of them. Though in his 50s, he worked a demanding physical job in the meat industry, trained thrice per week at CrossFit XR in Benson, North Carolina, and hadn’t needed to visit the doctor — apart from routine physicals — in years.

“I made the mistake of not getting a vaccine,” he said. “I thought I was healthy enough to fight COVID off.”

But he hadn’t always been healthy. Before he started CrossFit in 2013, Rufus was inactive, overweight, and on medication for restless leg syndrome. He spent his nights tethered to a CPAP machine to combat sleep apnea.

It was Sarah who convinced Rufus to give CrossFit a shot — after years of Rufus’ resolute refusals to step foot in the gym. 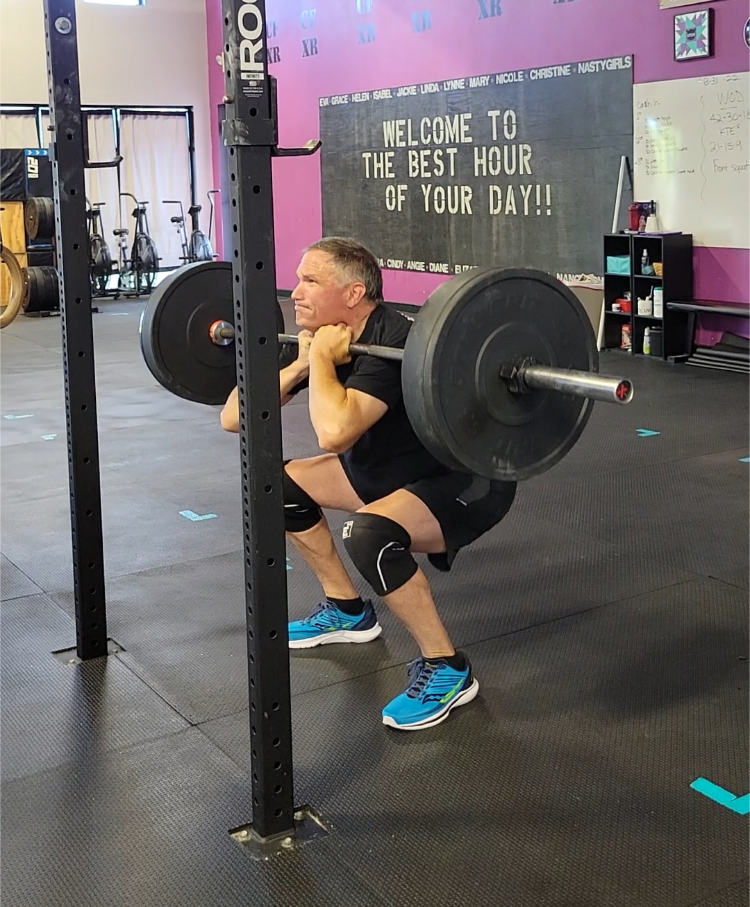 “My wife kept telling me how much she loved it … so I went and tried it one time — and I woke up (so sore) that I swore I was never going back,” Rufus said.

“He didn’t show up again for another six months,” said affiliate owner and coach Liz Brozowski. “But when he did come back, he never left.”

A year and a half later, Rufus had lost about 50 pounds, scrapped the medication, and no longer needed the CPAP machine.

“I just felt 100 percent better,” he said. “And if I had not lost that weight and (then) gotten COVID, I wouldn’t be here talking to you today.”

Late July in North Carolina is hot. Especially if you’ve just finished a shift slicing, hauling, and stacking 40-lb boxes of jerky onto pallets and packaging them for shipping.

Yet, “I remember turning the heater wide open on the truck going home at night,” Rufus said, describing the days leading up to his COVID-19 diagnosis.

The fever surged, hitting 104.7 F before he took an at-home rapid antigen test. On Aug. 5, 2021, at Sarah’s insistence, Rufus agreed to go to the hospital. But first, he wanted a shower.

A few minutes later, Sarah found him passed out on the bathroom floor.

An ambulance ride later and Rufus was at Duke University Hospital on two liters of oxygen. He was intubated on Aug. 14.

But it wasn’t enough.

“They kept having to turn the ventilator up and turn it up and turn it up,” Rufus said. “They said they had never seen it on that high (of a) setting, and they were afraid it was gonna damage my lungs.”

Ventilators work by using positive pressure to force air into the lungs, causing the alveoli to expand. But too much pressure can distend the alveoli and lead to lung injury, such as pulmonary edema, barotrauma, and organ dysfunction.

Sarah waited in her car in the hospital parking lot between visits.

With unmoving oxygen levels and lung damage on the horizon, there was only one remaining matter of recourse: the ECMO — ​​extracorporeal membrane oxygenation — machine. Similar to the cardiopulmonary bypass machine, commonly known as the heart-lung bypass machine, the ECMO machine pumps and oxygenates the blood outside of the body. It is not a cure, but rather a life-support system that performs the functions of the heart and lungs while giving the organs a chance to rest and heal.

It also demands an extraordinarily high level of critical care — requiring round-the-clock monitoring — and is considered a last resort. Consequently, relative risk is a crucial factor in determining who gets ECMO treatment and who’s left to luck.

“They pretty much don’t accept people over 50 because their chance of survival is so low,” Sarah reported.

But Rufus wasn’t your average 50-something.

“They took a chance on me because of the shape I was in,” he said. 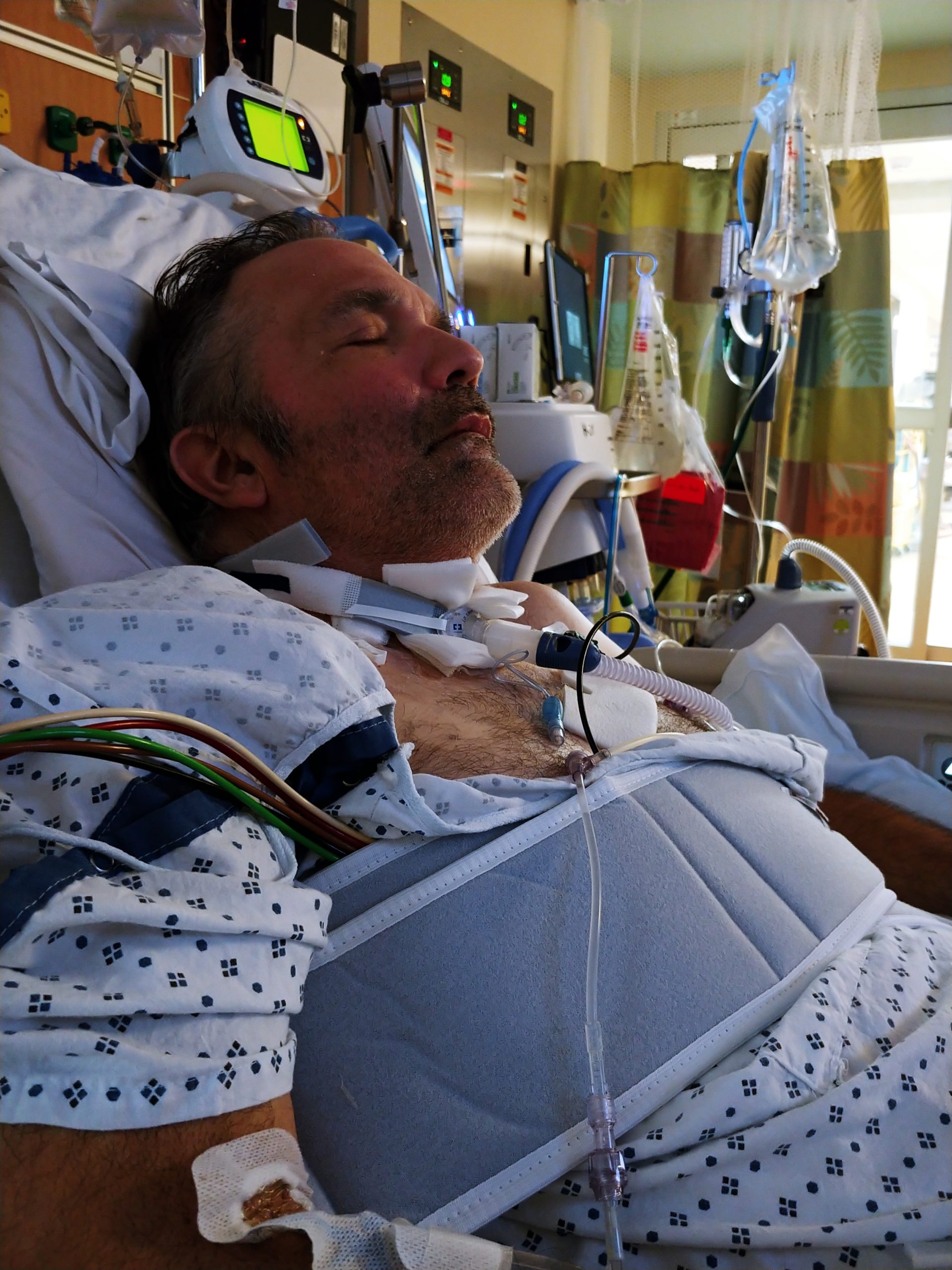 On Aug. 17, Rufus was airlifted to UNC Medical Center in Chapel Hill, North Carolina, which was equipped with 12 ECMO machines. Rufus was the oldest person the hospital had accepted for ECMO treatment to date.

There he lay for about a week, his heart and lungs static in his chest, the machine whirring as it gave him life. Meanwhile, Sarah rubbed his arms and spoke to him — just in case, beneath all the plastic and wires, Rufus might hear her.

“It was horrible because his eyes would open, but it was like nobody was there,” Sarah said.

The doctors began weaning Rufus from the machine on Aug. 23; on Aug. 24, he was removed from the ECMO machine and stabilized on a ventilator — a “miracle,” Sarah said.

In a 2021 study examining ECMO treatment and outcomes for COVID-19 patients, nearly half the ECMO patients examined died within 90 days of treatment.

“The doctors, they told me the reason I survived the ECMO machine was because of the shape I was in,” Rufus said.

Nearly a month after he was first intubated, Rufus awoke on Sept. 12, 2021 — although it would be another two weeks before he was fully coherent.

He had a long road ahead. Though now conscious, Rufus still breathed through a tracheostomy tube, speaking only occasionally with the aid of a speaking valve. He had barely the strength to turn over in bed.

“All my muscles I had accumulated in 53 years, it was just gone,” he said.

But thankfully, CrossFit trains the mind just as well as the body.

“I went into a CrossFit mindset that I was gonna tackle it,” Rufus recalled. “I just kind of took it on and thought of it as a WOD I had to get through.”

On Oct. 6, Rufus’ tracheostomy tube was removed, and the next day, he began outpatient physical and occupational therapy at WakeMed Health and Hospitals in Raleigh, North Carolina. The first time he took the walking test — five nonstop minutes on a treadmill — he collapsed after 30 seconds. Two weeks later, he walked the whole time — thanks in part to his diligent at-home training.

But the driveway was dull, and Rufus wanted to do more than walk. He sent a text to Brozowski: 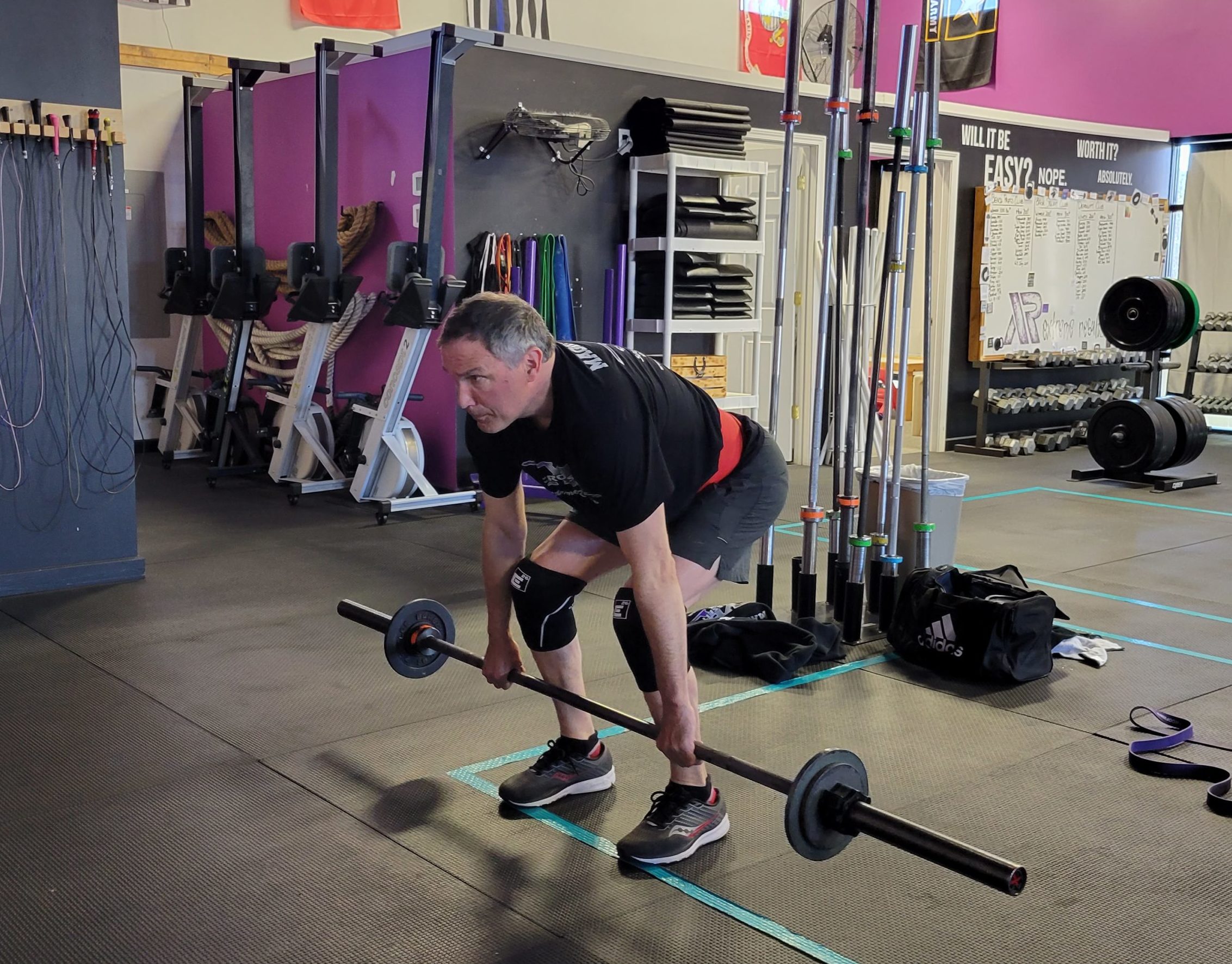 “It Should Have Been Impossible”

On Jan. 1, 2022 — just four months after his dance with death — Rufus returned to CrossFit XR.

“I knew that it was going to do a lot more for me than the rehab at the hospital,” he explained.

Modifications were in order. In addition to the lost strength and stamina, Rufus suffered from neuropathy in his right foot, the lingering effects of a blood clot and infection during his time on the ventilator.

When the workout called for running, Rufus would row, bike, or walk. He’d squat with plates under his heels to help regain his mobility. Barbells were swapped for light kettlebells or dumbbells.

The last week of July 2022 was “the first week that I ran really wide open, as fast as I could,” Rufus said.

It should have been impossible.

“All the doctors told me they’ve never seen anybody go through what I’ve gone through and then recover,” he said.

It’s been just over a year since Rufus’ ordeal, and he continues to defy all odds. Training two to three times per week at CrossFit RX, he’s back on the barbell, running, and both jumping and climbing rope — in addition to working full time.

The Browns hope Rufus’ story will encourage others to become and stay active no matter their age.

Because your fitness is the buffer between you and sickness — and someday, you just might need it.

“I tell my coach, ‘You saved my life,’” Rufus said. “Because of CrossFit, I can live a little longer.”