On this noteworthy day — the 15th day of the 9th month of the 21st year — it’s important to look back and note the cultural significance that the 21-15-9 rep scheme has had not only on CrossFit culture but also on culture at large. It’s not just a date or a series of numbers; it’s a feeling in all of us.

If you’re familiar with CrossFit, you are undoubtedly familiar with Fran and Fran lung. But do you know where the rep scheme came from?

If we visit the CrossFit.com message board, a 2003 post from Tom Corrigan offers some perspective on the dreaded 21-15-9.

It’s an elegant expression of the CrossFit methodology and a surefire way to maximize output and power while building mental toughness: All you have to do is get through the next set, which has fewer reps than the one before.

“This is manageable; you can do this,” you think after the set of 21.

Then comes the set of 15. Sure, it’s less work, but veteran CrossFit athletes will tell you it’s the nastiest set. It’s the make-it-or-break-it set for those seeking a PR, or generally, increased fitness and overall health. Once you get to the 9, just hold on and don’t stop.

But what does the rep scheme mean in the broad cultural sense? According to CrossFit Games Competition Director Adrian Bozman, “It’s iconic.” 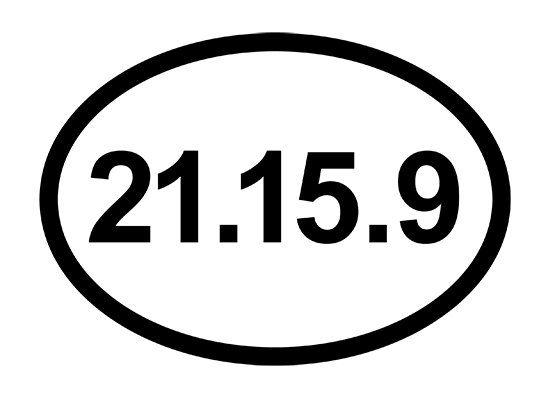 To the innocent bystander, the numbers are benign. To the indoctrinated, it elicits a visceral reaction. It’s a right of passage that only those who have endured can truly know.

At the same time, it transcends the walls of the CrossFit affiliate. CrossFit is widely known throughout not just the fitness world but also in pop culture. The 21-5-9 rep scheme is not entry to an exclusive club, but it is something you cannot fully grasp unless you have tasted the feeling.

Everyone remembers their first time doing Fran — and the first time they did it as prescribed. Odds are your time wasn’t anything near the fastest in the gym, but that’s not what’s important. Progressing from a PVC pipe and scaled reps to a barbell and the full complement of reps in Fran means you were able to increase your relative intensity. Your fitness is now greater than it was before.

Another cornerstone of the CrossFit methodology is excellence: finding the tip of the spear. The CrossFit Games provide a metric to find the Fittest on Earth, but for what reason? For some, it’s entertainment, but for all who partake in the shared suffering of CrossFit, it’s inspiration for what is possible.

CrossFit athletes are “bonded by a common pain and a common goal,” CrossFit Games veteran Val Voboril said in 2012.

We see what the best can accomplish, and that drives us to challenge our perceived limitations. You earn a badge of honor after you’ve done Fran for the first time as prescribed. Your confidence and sense of accomplishment grow with every ripped callus and pound lost. You build your buffer against sickness as you reduce A1C levels, improve blood pressure, and get off medications such as Metformin.

And what makes all this work? Intensity. The cornerstone of the CrossFit methodology.

By reducing reps as the workout goes on, you can keep the intensity up.

“That was a real point,” Bozman said. “Keeping intensity as high as it could be (and) both the physical and psychological effects of it on an athlete.”