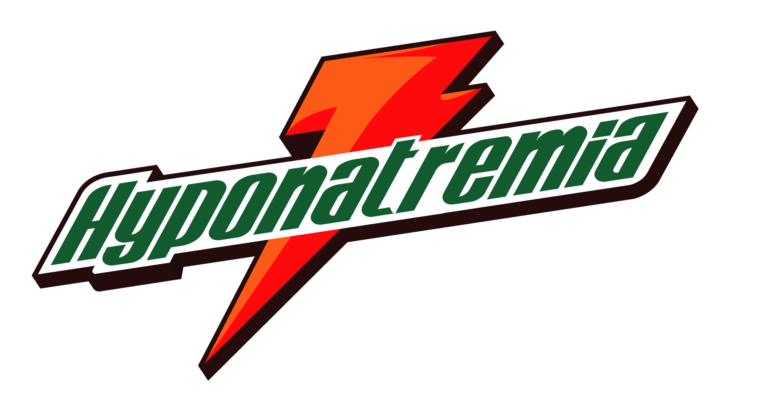 CrossFit, Inc. created the image for a series that exposes Gatorade’s deadly marketing campaign, written by the world’s foremost authority on the topic, Professor Noakes. CrossFit’s artwork served to elucidate Gatorade’s hydration myths, not advertise or indicate a commercial good or service. As such, it fell solidly within CrossFit’s fair use rights, as our legal counsel explained to PepsiCo.

Exercise-associated hyponatremia (EAH) refers to a low blood sodium concentration ([Na+]) that develops during or immediately following physical activity (sport or recreation). For most labs, the diagnostic threshold for hyponatremia is any blood [Na+] below135 mmol/L regardless of the presence or absence of signs and symptoms.

Exercise-associated hyponatremic encephalopathy refers to the dangerous and potentially fatal abnormal brain function and cerebral edema that result from the more extreme cases of EAH. The primary cause of both EAH and EAHE is excessive drinking of water, sports drinks, or other hypotonic fluids.

EAH and EAHE are experienced by athletes adhering to the false hydration guidelines or recommendations promulgated by the Gatorade Sports Sciences Institute, PepsiCo (manufacturer and seller of Gatorade through its subsidiary Stokely-Van Camp, Inc., as noted in its cease-and-desist letter to CrossFit, Inc.), and their sponsored proxies, such as the American College of Sports Medicine (ACSM) and the National Athletic Trainers’ Association (NATA).

In order to correct Gatorade’s profitable but deadly hydration myths, CrossFit hosted an international conference on EAH in February 2015.

After at least 19 preventable deaths from EAH, Gatorade and ACSM officials have partially acknowledged the validity of drinking to thirst. However, the damage has been done.

Accordingly, Gatorade’s legal department should be more concerned with continuing blowback from its reckless advertisements. These ads have included false and dangerous claims, such as, “Research shows your body needs at least 40 oz. of fluid every hour or your performance could suffer.” Athletes continue to die from hyperhydration-induced, exercise-associated hyponatremic encephalopathy, as is reviewed in Noakes’ series. This condition did not exist until the advent of Gatorade and its hyperhydration campaign.

CrossFit’s legal department responded to PepsiCo’s cease and desist immediately, informing the company that its trademark infringement arguments lacked support and substance. CrossFit will not comply with PepsiCo’s demands and is prepared to defend its rights to the full extent of the law.

CrossFit also will continue to shine a light on the fatal consequences of the food, beverage, and pharmaceutical industries’ efforts to make a profit through the corruption of the health sciences—including nutrition, exercise, and hydration.

Below is the full message to CrossFit, from PepsiCo.

READ THE CEASE AND DESIST