Five years ago, Richard Beddie, Chairman of the International Confederation of Exercise Professionals (ICREPS), made false statements regarding CrossFit, Inc. and its affiliates in an interview for an article titled “Fitness Can Be Bad for Your Health,” published in the health section of a popular New Zealand magazine. He claimed CrossFit had “resulted in six deaths overseas and rendered an Australian man paraplegic.” Beddie also suggested that CrossFit was causing a surge in injuries in New Zealand’s gyms and claimed that CrossFit’s “certification teaches you how to do CrossFit but not how to do exercise correctly.”

Beddie’s organization, ICREPS, is an international organization that includes nationally based fitness registries as member organizations. ICREPS’s members and associated organizations (such as the ACSM and NSCA, partners with ICREPS via the U.S. Registry of Exercise Professionals) advocate for the fitness industry to hire trainers registered with this body exclusively. This advocacy can extend to coercive attempts, such as legislation like occupational licensure laws.

After Beddie made false claims about CrossFit in a public forum, he then “contacted CrossFit with a very straightforward business proposition,” as CrossFit Founder and Chairman Greg Glassman has written. In his offer, Beddie first proposed that he could “get CrossFit training recognized for CPDs (which used to be called CECs) with REPs.” This raises an interesting question: If Beddie truly believed that CrossFit did not teach trainers “how to do exercise correctly,” why would he want to recognize its courses? Or could he have had some other motive, besides an honest concern about quality, for criticizing CrossFit and its courses?

noun
a situation in which a criminal group demands money from a store owner, company, etc. in exchange for agreeing not to harm them.

Beddie then offered to help defend CrossFit in the press, professing a willingness to “ensure someone directly involved in CrossFit gets the opportunity to make comment” when the press covered CrossFit. At that point, Beddie had appeared in the main New Zealand press attacking CrossFit and falsely accusing CrossFit affiliates and trainers of causing an injury problem in New Zealand. Now he wanted to partner with and support CrossFit, recognize CrossFit courses, and offer a chance to correct the record?

Glassman’s refusal was swift and direct: “Over my dead body.”

Beddie then went after CrossFit in the press once more. The article, published on TVNZ.co.nz, amounted to a pitch for putting all CrossFit trainers on the country’s register of exercise professionals to “allow the industry to set a consistent standard of training.”

TVNZ reported that Beddie said, “There are many really good Crossfit instructors out there. The key thing is though is do they meet standards that the industry has agreed on.”

TVNZ added that meeting those “industry” standards “could cost up to $400 a year.”

So, what could have been Beddie’s motivation for defaming CrossFit? As Glassman noted at the time, the answer could lie in the $400-per-trainer fee to join Beddie’s registry, which “equated to US$300,000 a year in Mr. Beddie’s New Zealand, and $30 million annually for global protection.” Those significant numbers represent the total costs of CrossFit trainers joining ICREPS’s registries — a high price to pay to meet a false standard of legitimacy and avoid the damage caused by false accusations in the press.

Rather than capitulating, CrossFit, Inc. sued Beddie for defamation while Glassman flew to New Zealand to rally the nation’s affiliates against Beddie and his agenda.

Five years later, on March 20, 2019, Beddie admitted that he had no evidence to back up his allegations against CrossFit and issued a formal apology:

In 2014 the Chief Executive of Exercise NZ, Richard Beddie, gave an interview in which he stated that CrossFit had been responsible for six deaths overseas and had rendered an Australian man paraplegic; and suggested that CrossFit certification may not teach CrossFit trainers how to do exercise correctly.

Exercise NZ and Richard Beddie accept that CrossFit has not in fact been responsible for any such deaths or paraplegic injury; that there was no basis for those claims; and that the criticism of CrossFit trainers were unwarranted.

Exercise NZ and Richard Beddie accept that CrossFit is a legitimate and effective training regime and is as safe as other similar forms of exercise or activity.

Beddie’s case was not an isolated incident. In the context of this apology, it is perhaps instructive to briefly review what CrossFit has learned about its competitors in the fitness education space over the past five years. In Glassman’s words:

The American College of Sports Medicine (ACSM) and the National Strength and Conditioning Association (NSCA) are partners with Mr. Beddie in ICREPS, through the U.S. Registry of Exercise Professionals (USREPS). These organizations have all engaged in long-term, systematic, regular, and collaborative fraud — fraud that is scientific, academic, and tortious — in their representatives’ collective statements, publications, press releases, and in a paid public-relations campaign against CrossFit.

The image below illustrates the crossover between fitness licensure and registration organizations and CrossFit’s aspiring competition from 2014 to 2015, when Beddie first published his claims: 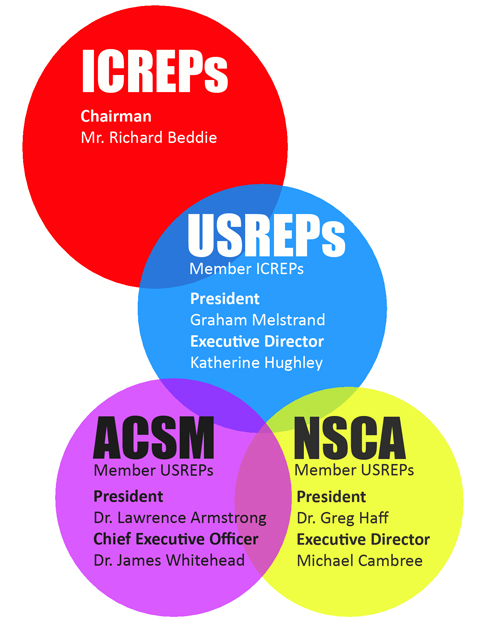 Since 2015, some of these individual names have changed. Others have not. And the organizational map still looks much the same.

CrossFit has, however, notched victories against these hostile collaborators. After five years of litigation, Beddie has agreed to settle and formally apologized to CrossFit. USREPS officially ended its licensure advocacy after CrossFit shut it down in D.C. In a manner similar to the situation with Beddie, the NSCA has corrected and retracted its own false statements about CrossFit after years of litigation (still pending), and it remains an open question whether the NSCA will survive this lawsuit (the NSCA has been sued by its own insurance carrier, which demands to be paid back all the money it paid out in the NSCA’s defense).

The locus of power in the fitness organization landscape has shifted dramatically over the past five years. When a consortium of actors (REPS NZ, NSCA, ACSM, etc.) began to attack CrossFit, they presented a united front, linked by the international ICREPS confederation and a common agenda. They controlled the levers of power in governments and academic bodies around the world. Simultaneously, they enjoyed the support of some of the most powerful corporations in the world, their food and beverage industry sponsors, as well as key contacts in popular media. From Christchurch, New Zealand, to Bethesda, Maryland, and San Diego, California, to Columbus, Ohio, the ICREPS members’ anti-CrossFit strategy remained consistent: lie, lobby, and legislate. Their injury lies justified their lobbying, aimed at legislation that would restrict or ban CrossFit’s affiliate model or impose exorbitant fees on CrossFit trainers.

In contrast, five years ago, CrossFit, Inc. had a few thousand affiliates and zero experience in lobbying or investigating and correcting deliberate scientific misconduct. CrossFit does, however, maintain the support of a passionate community and possesses a fitness program that constitutes an “elegant solution to the world’s most vexing problem,” chronic disease.

Over the past few years, CrossFit, Inc. has learned how to effectively fight back against well-connected, unscrupulous adversaries. Wherever CrossFit affiliates and trainers are under attack, CrossFit will continue to defend them — and expects that ICREPS and the NSCA’s misfortunes have sent a clear message.