Scientists in Edinburgh, Budapest, and Prague began a study in 1965 to explore the potential of clofibrate, a cholesterol-lowering agent, to reduce ischaemic heart disease (heart attacks). The committee of principal investigators who shared the study’s findings in 1978 explained that in the years preceding the trial, “the association of raised serum lipids, particularly cholesterol, with an increased risk of developing ischaemic heart disease, was well established (e.g. Kannel et al., 1964).” They continue:

Whether raised serum cholesterol actually was causative or, simply, the indication of an underlying metabolic disorder was not known. But on general principles, medical opinion held that it was desirable to reduce serum lipids towards accepted normal levels as far as possible. The means of achieving this were largely based on alterations in diet, and experience at that time suggested that the measures thought necessary were impracticable on any wide scale and were unlikely to be adhered to by most individuals in an affluent society. The possibility of using a cholesterol-lowering drug had been considered but until ethyl chlorophenoxyisobutyrate (later called clofibrate) was introduced (Oliver, 1962; Thorp, 1962; Thorp and Waring, 1962; Symposium on Atromid, 1963) none available satisfied the prerequisites of effectiveness and safety. Clofibrate was known to be capable of reducing plasma concentrations of low density, and very low density, lipoproteins, and thus cholesterol and triglyceride. It was decided, therefore, to initiate a trial in healthy volunteers to find out whether reducing plasma lipids, using clofibrate, would result in a decreased incidence of ischaemic heart disease. No deliberate attempt would be made to change the life style of participants or to rectify other risk factors.

Throughout the study, drug adherence was assessed to be relatively high; more than 94% of the subjects consistently took their prescription across all three sites. Two-thirds of the subjects completed the five-year intervention, with no visible differences between groups.

Clofibrate successfully reduced the primary endpoint of major IHD, with 167 heart attacks observed in the treatment group and 208 in the high-cholesterol placebo group (See Table 3 below).¹ 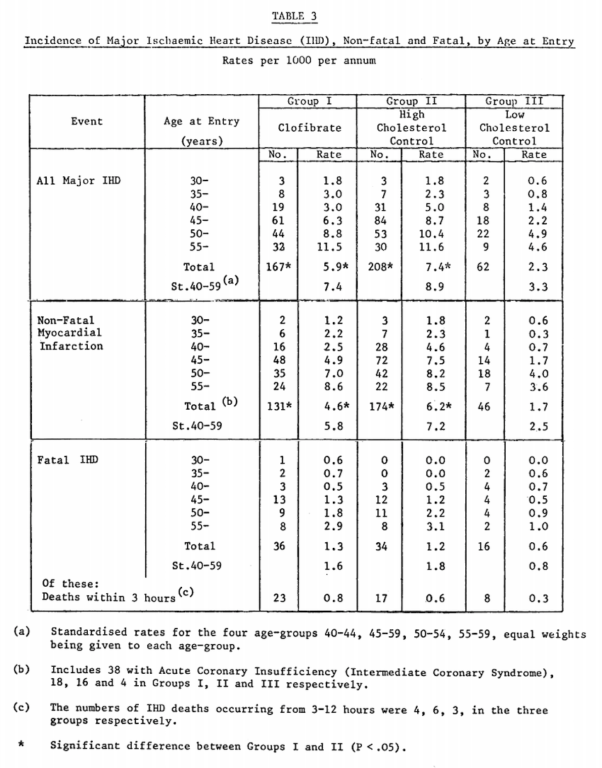 From “A co-operative trial in the primary prevention of ischaemic heart disease using clofibrate,” p. 1077

Clofibrate also led to an average 9% decrease in cholesterol compared to the placebo (see Table 7 below). Both these decreases were slightly less than what investigators had anticipated, but remained statistically significant. 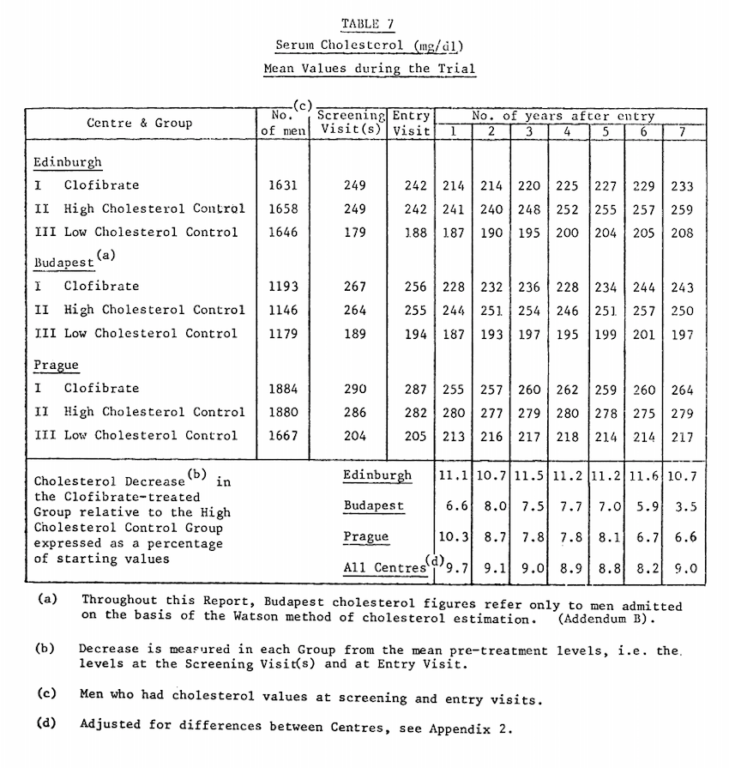 From “A co-operative trial in the primary prevention of ischaemic heart disease using clofibrate,” p. 1081

It is also worth noting, particularly given the historical context, that this trial supported the significance of a variety of risk factors for heart disease, as high baseline serum cholesterol, high serum blood pressure, and cigarette smoking all had greater impacts on rates of heart disease than that reflected between the clofibrate and placebo groups (Table 9). 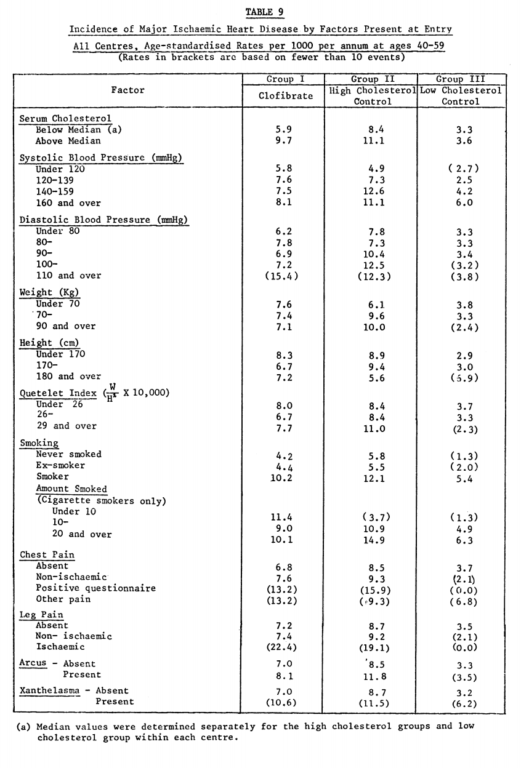 From “A co-operative trial in the primary prevention of ischaemic heart disease using clofibrate,” p. 1085

The clofibrate group, however, experienced more fatal heart attacks than the placebo group (36 versus 34). There was a significant decrease in hypertension but no significant impact on angina pectoris, abnormal ECG, or cardiac arrhythmia.

More importantly, clofibrate led to a significant increase in all-cause mortality compared to the placebo group. In the clofibrate group, 162 men died (age-adjusted rate: 4.9 deaths per 1,000 person-years) compared to 127 in the placebo (rate: 3.8). As noted above, there was no decrease in total cardiovascular mortality (54 versus 48 deaths), but there was a significant increase in all causes of death other than heart disease.

Thus, despite technically meeting the primary endpoint and sparking a thorough investigation into potential explanations for the disappointing results, the authors concluded:

The results of the trial confirm the basic hypothesis that reduction of high serum cholesterol levels, even in middle-age, can reduce the incidence of IHD. However, the fact that clofibrate increases the incidence of gall stones, and the possibility that it may have even more serious local pathological consequences, indicate that it cannot be recommended as a lipid-lowering drug for community-wide primary prevention of ischaemic heart disease.

Nevertheless, clofibrate remained in use until 2002, though by that point its use had decreased dramatically given the increasing use of statins to lower cholesterol levels.³

Uffe Ravnskov and David Diamond comment on the WHO trial (among many others) in Fat and Cholesterol Don’t Cause Heart Attacks, noting in broad conclusion:

Despite the largely disappointing findings from 50 years of cholesterol lower[-ing] trials, the indictment and conviction of cholesterol as the causal agent in CVD [cardiovascular disease] has stood the test of time. … [Yet] the grand effort to reduce cholesterol as a strategy to improve health has failed.