“Each box, each gym is a lifeboat in what is a tsunami of chronic disease.”

The tsunami has landed. As Owen Dyer reported last December in the BMJ:

Life expectancy at birth in the United States fell again in 2017 for the third year running, the longest sustained decline since 1915-18, when the first world war and the 1918 Spanish influenza pandemic were among the causes of death.

Why is a once-in-a-century sustained decline in life expectancy not yet a matter of national discussion, let alone a major political issue? While the U.S. Department of Health and Human Services so clearly is failing in its mission “to enhance and protect the health and well-being of all Americans,” what is it doing instead?

To be sure, the opioid epidemic has received much deserved attention. Nonetheless, many other significant factors have contributed to the decline in Americans’ health. Influenza, pneumonia, and suicide-related deaths all significantly increased in 2017. In addition, per Dyer, “Statistically significant increases were also seen in deaths from diabetes (up 2.4%), Alzheimer disease (2.3%), stroke (0.8%), and chronic lower respiratory diseases (0.7%).” Significantly, the latter group constitutes lifestyle-related chronic diseases, which as a group are responsible for 88 percent of all U.S. deaths according to the World Health Organization. Moreover, Canada has also suffered from a high and increasing opioid-related death rate, yet its life expectancy is four years higher than that of the United States and rising.

A different BMJ paper from 2018 concluded: “That death rates are increasing throughout the US population for dozens of conditions signals a systemic cause and warrants prompt action by policy makers to tackle the factors responsible for declining health in the US.” The authors noted, “Except for recent coverage of the spread of the opioid epidemic to minority populations, the possibility that midlife mortality might be increasing across racial and ethnic groups, reversing years of progress, has received little public attention.”

What, then, have the Centers for Disease Control and Prevention (CDC), National Institutes of Health (NIH), and Department of Health and Human Services (HHS) done to address the health crisis?

The unfortunate truth is that rather than defending public health, the U.S. government’s public health agencies have followed a consistent and problematic pattern of behavior:

As government institutions fail, it is up to individuals to seek out resources that help them combat chronic disease and support a long and healthy life. The resources available in CrossFit affiliates around the world are so effective in this regard that they may be optimal.

A major disparity exists between the CDC’s diabetes estimates and those from independent sources. The CDC estimates that in 2015, diagnosed and undiagnosed cases of diabetes included “30.2 million adults aged 18 years or older (12.2% of all U.S. adults), of which 7.2 million (23.8%) were not aware of or did not report having diabetes.” This comes out to roughly 23.1 million cases of adult, diagnosed diabetes, or 9.3 percent of the adult population. On the other hand, Gallup polled 177,000 Americans and reached a much higher figure than the CDC: “11.6% of U.S. adults reported having been diagnosed with diabetes.” That comes out to 28.8 million diagnosed cases among adults.

So Gallup estimates the true number of adult Americans diagnosed with diabetes is 25 percent higher than the CDC figure. That’s a difference of 5.7 million Americans. Why might the CDC have reached such a dramatically lower diabetes estimate than independent researchers? Well, if you read beyond the CDC’s press release and into its research methodology, the agency “assumes that the prevalence of diabetes in 2015 was the same as it was in earlier periods (2011–2014).”

A strange assumption. The CDC itself has warned that diabetes is spreading at a consistent rate. And yet somehow it has assumed that diabetes prevalence did not change over a five-year period?

Non-CDC sources all seem to suggest that the diabetes problem is worse than the CDC portrays it to be. For example, the Department of Justice found that the rate of diabetes for prison inmates nearly doubled between 2004 and 2012, an astounding growth rate. Similarly, private insurance companies reported, “Claims for Type 2 diabetes — formerly known as adult-onset diabetes — among people younger than 23 years old more than doubled between 2011 and 2015,” per NPR. The private insurers also found “the number of claims tied to an obesity diagnosis jumped 94 percent among infants and toddlers, and as much as 154 percent among people ages 19 to 22.”

It’s hard to square the private insurance data with what the CDC claims. As NPR noted, the data “contrasts with CDC findings that the prevalence of obesity among children and youth ages 2 to 19 years old remained relatively stable from 2011 to 2014.”

The CDC also appears to severely underestimate obesity by as much as one-third. University of Florida researchers “calculated the state’s obesity rate using a database of medical claims and electronic medical records of 12 million Floridians.” In contrast, the CDC used notoriously unreliable self-reported height and weight data, essentially trusting people not to lie about their weight. The independent researchers found a 37% obesity rate in Florida, as compared to the CDC’s relatively low 28% figure.

University of Florida researchers are not the only ones to point to problems with the CDC’s obesity stats. A 2016 PLOS One study also found, “State-level estimates from the Centers for Disease Control and Prevention (CDC) underestimate the obesity epidemic because they use self-reported height and weight. … Twelve million adults with obesity (including 6.7 million with severe obesity) were misclassified by CDC state-level estimates.”

Why is it that almost every time CDC and independent estimates diverge, the CDC’s figure is much lower than what independent researchers find?

Ignoring the Causes (and Cures)

The NIH alleges,“While a number of therapies are approved for T2D, none can reverse disease progression over the long term or prevent complications of the disease.”

NIH still denies that any therapy can prevent Type 2 diabetes from progressing, despite countless real-life examples and several studies showing that Type 2 diabetes can be reversed through carbohydrate-restricted diets. The stakes are high; if diabetes progresses, its complications include kidney failure and limb amputation.

This negligence is not an isolated incident. The CDC’s Diabetes Prevention Program still is promoting a diet that ignores added sugar and instead focuses on lowering fat intake. For example, Session 3 mentions “fat” 143 times and “sugar” just twice.

And Session 2 claims, “Eating too much fat is what makes us fat … Fat contains more than twice the calories as the same amount of sugar, starch, or protein.” It then points out that popcorn has less fat than peanuts. Commenting on this strange CDC content, Dr. David Ludwig pointed out that “processed grains are associated with increased diabetes risk, whereas nuts/legumes appear protective.” 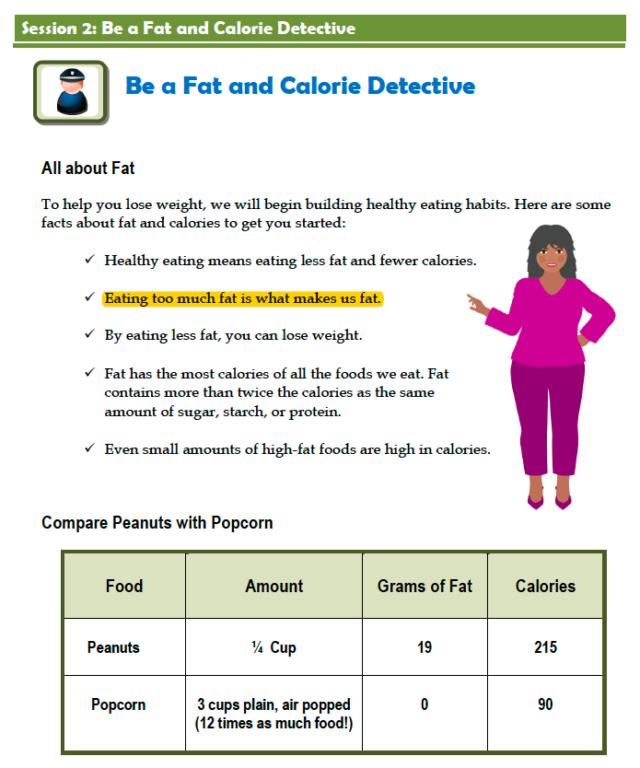 Even the American Diabetes Association’s most recent guidelines for adults with diabetes and prediabetes recommend that these individuals “minimize added sugars and refined grains.” They also observe, “Reducing overall carbohydrate intake for individuals with diabetes has demonstrated the most evidence for improving glycemia.”

So why is the U.S. government still spreading a message that is diametrically opposed to what the actual evidence suggests?

Partnering With Those Responsible

Corruption (or as the cognoscenti call it, public-private partnerships) enjoys broad bipartisan support within the Beltway—see the CDC Foundation and the Foundation for the NIH (FNIH), for example. The CDC Foundation and FNIH are the means by which opioid, food, and beverage companies fund “public health” efforts. When Congress created these organizations and designated federal funds for them, it required them to annually publish the source, amount, and restriction of each payment they accepted. The foundations have not come close to complying with this law.

CrossFit, Inc. brought this lack of compliance to Congress’ attention, and Congress directed the foundations to adhere to the law going forward. The CDC Foundation’s 2018 report still does not comply with the law, in blatant defiance of both the Public Health Service Act and Congress’s 2018 directive. The FNIH indicated to the press that it had not yet been sufficiently directed to comply, again despite clear language in its founding legislation and fiscal year 2019 congressional report directing it to do so.

We still do not fully know the scope of the damage caused by these shadowy partnerships. The foundations not only fail to fully list their donations; they also are exempt from the Freedom of Information Act, despite being founded and annually funded by the U.S. government. We do have some indication of the extent of corporate influence, however.

During the period that Coca-Cola funded the NIH and CDC, NIH officials met regularly to implement Coke’s “Exercise Is Medicine” initiative in U.S. medical schools. And CDC officials consulted with Coca-Cola, even advising the beverage company on how to lobby the World Health Organization on sugar. The soda-CDC collusion eventually prompted internal CDC whistleblowers to write an anonymous letter alleging that unethical behavior had become “the norm and not the rare exception,” that soda-affiliated employees seemed to enjoy special treatment, and that the agency misled Congress regarding chronic disease prevention data.

CrossFit, Inc. has sued the Department of Health and Human Services to get to the bottom of this problem. HHS attorneys tried to retroactively redact emails they sent CrossFit in accordance with the Freedom of Information Act. These emails showed that CDC officials were well aware of the CDC Foundation’s legal report requirements and even asked their counsel if the foundation could continue to “skate by” with its incomplete reporting of corporate gifts.

U.S. public health efforts appear to be ineffective at best and irredeemable at worst. NIH Director Francis Collins canceled opioid industry funding for his HEAL opioid epidemic response. Collins endorsed his advisory committee’s recommendation not to involve opioid companies caught up in opioid-related litigation in the initiative’s funding or governance. A year later, Collins’ NIH has involved both Pfizer, an opioid company sued multiple times for its role in the crisis, and PhRMA, the industry’s lobbying group, in the initiative’s governance (through the HEAL Partnerships Committee).

So, what to do? We cannot trust much of the “science,” we have good reason to doubt at least some of the data, and the public health agencies that are supposed to protect us are cooperating with the enemy. While CrossFit, Inc. and other like-minded organizations continue to fight for improved conflict of interest policies and the upholding of laws meant to safeguard scientific inquiry from inappropriate influence, it would be naive to look to governmental and public health institutions for salvation. Fortunately, there is another solution.

Any attempt to prevent and reverse chronic disease, and thus maximize fitness over the course of a lifespan (health), must involve functional exercise, balanced nutrition, and a system that encourages, educates, and rewards adherence. More specifically, it must limit or eliminate added sugar and refined carbohydrates, develop capacity in the movements required by real life, and provide a social, community setting with coaches trained in and experienced with improving their clients’ lives.

If this sounds like constantly varied, functional movements executed at relatively high intensity with the support and guidance of a CrossFit trainer or affiliate, and combined with a diet of meat, vegetables, nuts, etc., that’s no accident. As Greg Glassman has stated, this system provides an elegant solution to the world’s most vexing problem, chronic disease.

The tsunami has landed, and if you haven’t already, you might want to jump in a lifeboat. Other help may not be coming.

Cover image from “Life expectancy in America has declined for two years in a row” in The Economist.