Moore’s Law developed from Gordon Moore’s famous observation about the growth of semiconductor technology over time: The number of transistors per integrated circuit doubles every two years, and consequently the price of a given unit of processing power decreases exponentially over time.

In this 2012 review, Jack W. Scannell, Alex Blanckley, Helen Boldon, and Brian Warrington discuss “Eroom’s Law,” which focuses on the drug market instead of technology and is the opposite of Moore’s Law in name and concept: The cost of developing a new drug doubles approximately every nine years, indicating that the number of drugs approved per billion dollars spent has fallen 80-fold since 1950. The authors review four major factors for this phenomenon.

They also note that the decrease in research efficiency occurs in spite of dramatic improvements in our technical abilities (including faster and cheaper molecule synthesis, DNA sequencing, and screening). 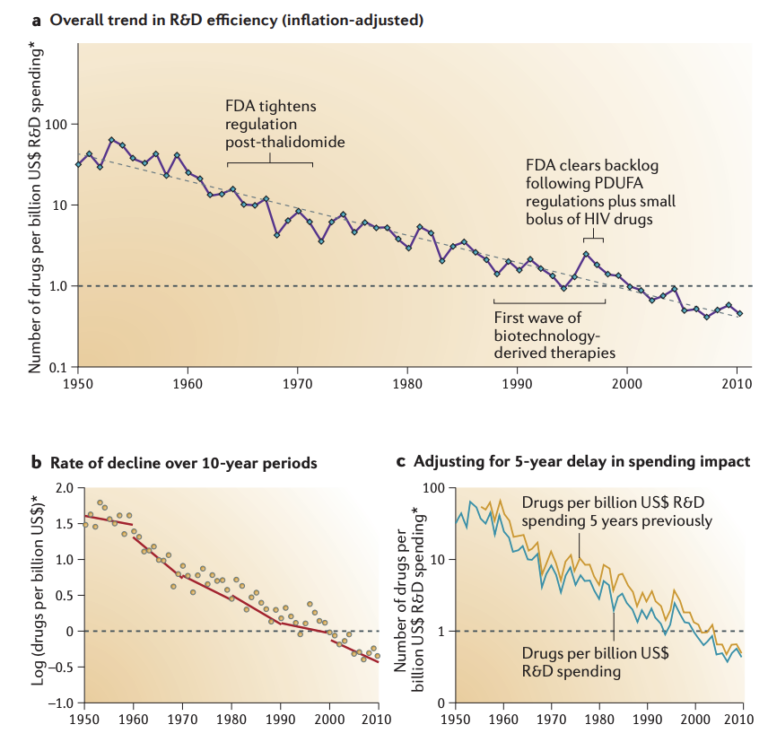 1. The “better than the Beatles” problem

New drugs need to be more effective than the best drugs already on the market, which pushes research into areas where development is more challenging. This raises the bar that new treatments must surpass and shrinks their potential market, which would be like each new pop song needing to be “better than the Beatles.”

Regulatory agencies have been lowering their risk tolerance and raising standards for demonstrated drug safety and clinical trial design. While these restrictions have merit, they kill some drug candidates in the early stages and increase the cost of continued research.

3. The “throw money at it” tendency

The profitability of the pharmaceutical industry has increased capital availability, and this may in itself drive increased R&D investment.

Dramatic improvements in the cost of early-stage R&D, and the shift in pharmaceutical strategy toward identifying drug candidates via basic research (as opposed to observations in human/animal models) may predictably create candidates that advance to clinical trials but are less likely to succeed in these trials. This may be the result of the industry’s focus on drugs that target very specific biological pathways, which often fail to significantly improve patient condition in large clinical trials.

Derek Lowe provides an additional summary of the review for Science Translational Medicine, emphasizing that the problem highlighted by Eroom’s Law is unique to the pharmaceutical industry.

“We are heading, at speed, for a world in which fewer and fewer useful medicines are discovered, while more and more people want them,” he writes.