A medical reversal occurs when a new clinical trial demonstrates a treatment already in use or already perceived as evidence-based is either ineffective or no more effective than pre-existing alternatives. Prior to the reversal, these interventions — which could take the form of drugs, procedures, vitamins or supplements, devices, or more systemic changes — are often in widespread use. As a result, the cost of undetected reversals — i.e., treatments that will subsequently be shown to be ineffective — is substantial, both in terms of wasted medical spending and ineffective treatments delivered. Previous efforts to identify reversals have been limited to self-policing by specific fields; this review is the first attempt to systematically assess the frequency of medical reversal across all fields.

The authors reviewed more than 3,000 randomized controlled trials published in JAMA, the Lancet, and the New England Journal of Medicine between 2003 and 2017 (for NEJM, the survey only covered 2011 to 2017). They found 396 medical reversals spread across a variety of intervention types (e.g., medication, procedure, vitamin/supplement, device) and fields (e.g., cardiovascular disease, preventive medicine, obstetrics and gynecology). Overall, 13% of all randomized controlled trials included reversals, and over half of these reversals were confirmed by subsequent systematic review. 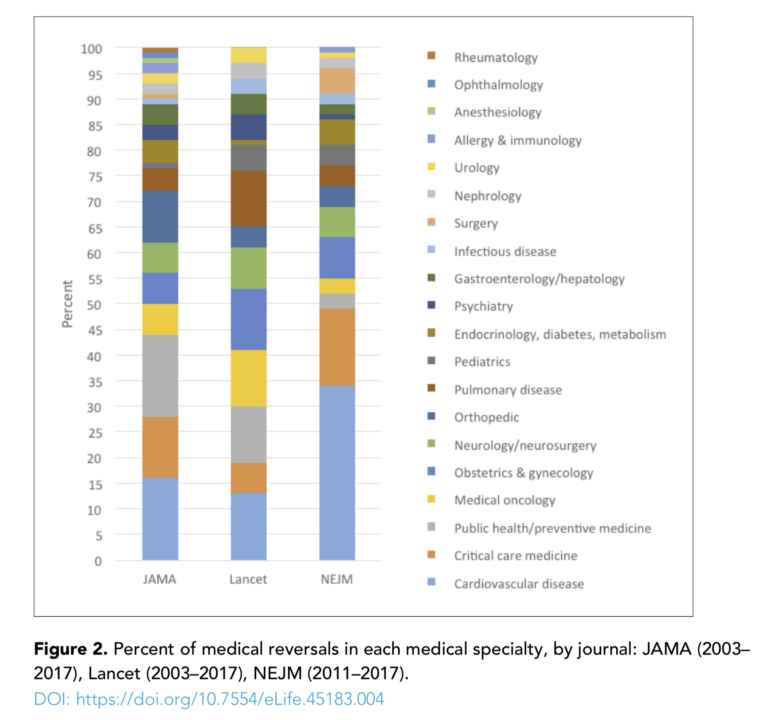 The authors summarize a number of reversals. Notable examples include:

In each case, the listed treatment was in clinical use and considered evidence-based until the linked study demonstrated it was ineffective or no more effective than pre-existing alternatives.

The authors note public research funding was critical in supporting these reversals: 64% of reversals were entirely publicly funded; conversely, more than one-third of all trials but only 9% of all reversals were primarily industry funded.

This review reinforces the importance of basing clinical recommendations on randomized controlled trial data rather than less rigorous standards of evidence. These data indicate a significant share of treatments, even if they are in widespread use, will be found ineffective when tested in a rigorous clinical trial. Therefore, treatments that have not yet been subjected to this standard of evidence should be viewed with caution if not skepticism.