As noted in other articles on CrossFit.com, a very low-calorie diet (VLCD) has been shown to drive significant and rapid improvements in glycemic control in Type 2 diabetic subjects.

There are two primary mechanisms by which the body’s ability to maintain proper glucose levels can be improved:

As insulin sensitivity degrades, insulin resistance develops. In response, the body will secrete additional insulin when glucose levels rise. Diabetes develops when the body can no longer secrete enough insulin to moderate blood glucose levels, and Type 2 diabetes develops because of both a decreased insulin secretion response (i.e., not enough insulin is being produced) and whole-body insulin resistance (i.e., the insulin that is produced is not having enough of an effect on blood glucose levels). It is possible that glucose control can be rapidly reestablished if even one of these two defects is ameliorated.

In the 2012 trial considered here, 14 morbidly obese, elderly subjects (seven men, seven women) with good glycemic control (HbA1c < 7.5%) were fed a VLCD (400 calories per day) for seven days. All subjects were either non-medicated at baseline or taken off any medication when the study began.

After the VLCD, subjects showed improved glucose clearance (an increased M-value) and insulin secretion (an increased disposition index), but they did not demonstrate increased insulin sensitivity. The total amount of insulin released during the hyperglycemic clamp study increased significantly. In other words, subjects were excreting more insulin in response to blood glucose elevation and thus were able to clear more glucose from the blood. However, a given dose of insulin was not significantly more effective at clearing insulin from the blood than it had been prior to the VLCD. 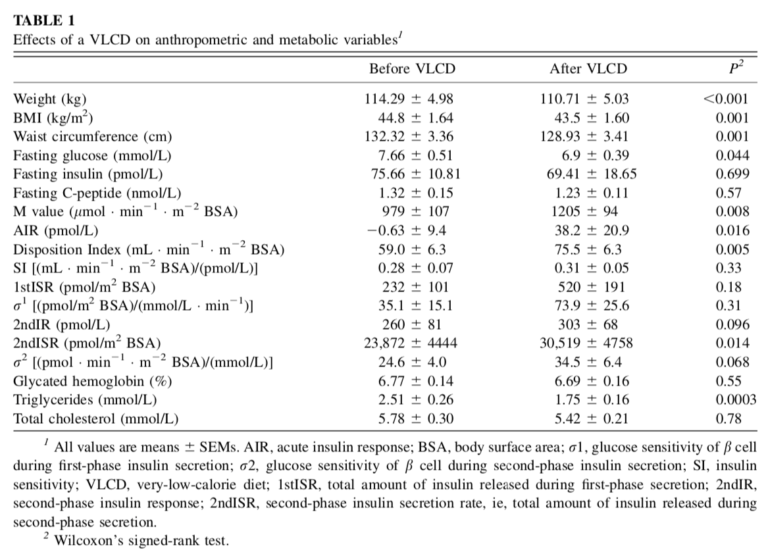 This suggests a VLCD did not improve insulin resistance in these obese diabetic subjects over seven days but did lead to substantial improvements in pancreatic beta-cell function. In practice, these improvements allowed subjects to more effectively control their blood glucose levels by releasing appropriate amounts of insulin in response to blood glucose elevation. The authors note this is consistent with previous VLCD studies (2), which have similarly suggested rapid improvements in glycemic control observed following VLCD initiation are related to improved pancreatic function and/or insulin secretion rather than improvements in whole-body insulin sensitivity.