In this 2016 article, Lewis Cantley, Marcus Goncalves, and Benjamin Hopkins review the links between obesity and the development and growth of cancer. As noted in the paper’s abstract:

Obesity is a risk factor for cancer development and is associated with poor prognosis in multiple tumor types. … Each of [a variety of obesity-related] factors alters the nutritional milieu and has the potential to create an environment that favors tumor initiation and progression. Although the complete ramifications of obesity as it relates to cancer are still unclear, there is convincing evidence that reducing the magnitude of the systemic hormonal and inflammatory changes has significant clinical benefits.

Understanding the metabolic changes that occur in obese individuals may also help to elucidate more effective treatment options for these patients when they develop cancer.

As adiposity increases, leptin (a hormone linked to hunger and satiety) tends to increase as well. Leptin has been shown to increase cancer cell survival in vitro and activates a variety of oncogenic cell lines, including PI3K and MAPK. Adiponectin (another metabolic hormone), conversely, has been shown to inhibit cancer cell growth. Thus, the decrease in adiponectin levels seen in conjunction with obesity may further promote cancer growth.

Insulin and IGF-1 signaling have been shown to play a role in tumor progression, with insulin receptor (IR) and IGF-1 receptor (IGF1R) activity upregulated in some tumors. Insulin and IGF-1-related pathways also play an integral role in accelerating metabolism and anabolism/growth in normal cells and cancer cells, which may explain why hyperinsulinemia has been shown (epidemiologically and in vitro) to promote breast cancer incidence and proliferation. 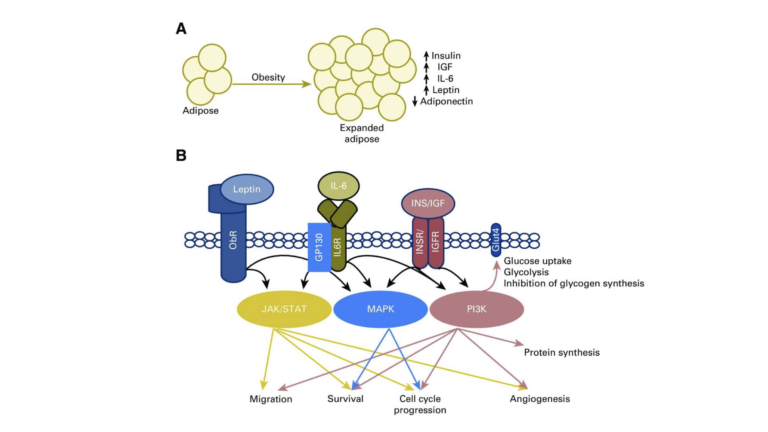 Figure 1: The signaling of obesity. (A) Changes in the size of adipose depots affect systemic homeostasis and lead to increases in insulin (INS), insulin-like growth factor (IGF), leptin, inflammatory cytokines, and result in decreased levels of adiponectin. IL-6, interleukin 6. (B) These signaling molecules activate cell surface receptors and drive signaling through the Janus kinase (JAK)/signal transducers and activators of transcription (STAT), mitogen-activated protein kinase (MAPK), and phosphatidylinositol 3-kinase (PI3K) signaling pathways, all of which are frequently altered in cancer. By chronically activating metabolic signaling cascades, the obese state lowers the barrier for oncogenic transformation by driving cell growth and proliferation, and resisting apoptosis. It is these functions that make components of these signaling pathways some of the most frequently altered in human cancers.

In light of these pathways, the authors note that weight reduction and management of hyperinsulinemia and hyperglycemia may reduce cancer incidence and progression. Preliminary evidence suggests ketogenic diets, metformin, and therapies targeting other metabolic pathways may either serve as adjuvant treatments or, in the case of well-tolerated treatments such as diet and metformin, support cancer prevention. The authors note that while specific metabolic therapies (e.g., PI3K inhibitors) show promise, such therapies are challenging to develop as it is difficult to impact metabolism in specific cells without causing systemic damage.