This article discusses the diet-heart hypothesis, the main reasons why it became dominant, and how it has led to dietary guidelines that have driven an unprecedented change in eating habits in most of the developed world. Future articles will look at the weaknesses in the hypothesis from physiological, epidemiological, and interventional perspectives.

It is generally accepted that cardiovascular disease, primarily coronary heart disease (CHD), first appeared as a modern “epidemic” in the U.S. shortly after the Second World War. As the U.S. did not begin using the International Classification of Diseases (ICD) system until 1948, a diagnosis of CHD could not be made before this time, so the exact rate of CHD prior to 1948 can only be, to a degree, guesswork.

However, it is probably true that CHD (however labeled) was very rare before the First World War, then steadily rose in prevalence during the 1920s, ‘30s, and ‘40s. By the 1950s, the death rate from CHD had reached a point whereby, within a 10-year period, one in 10 men was dying from a myocardial infarction. The mortality rate for women was about one-quarter that of men, although this differential was narrower in older age groups. The current rate in the U.S. is about one-fifth of this peak level. 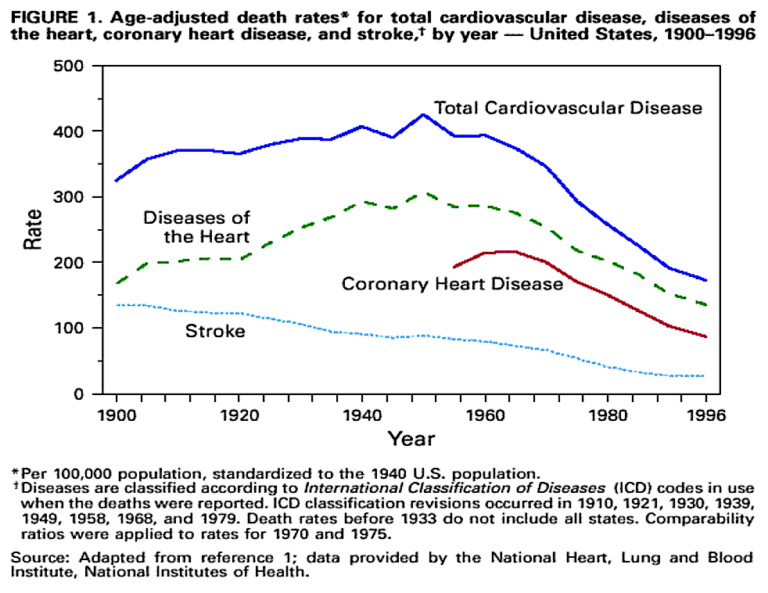 In the 1940s and 1950s, there was little agreement about what had led to this “sudden” explosion of cardiovascular disease, although there had been speculation about dietary causes for many years.

What was known was that atherosclerotic plaques (thickening and narrowing of arteries), which are the underlying problem in all forms of CVD, contained “fat(s)” and cholesterol. It seemed probable that this fat and cholesterol had been deposited from the bloodstream.

A brief history of early knowledge about cholesterol 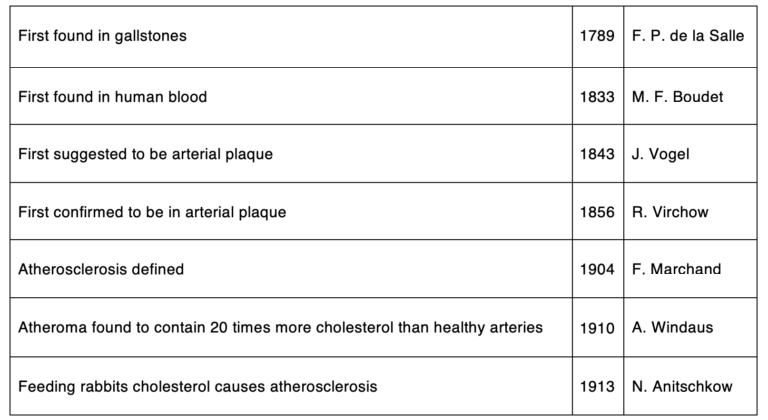 The information about cholesterol was purely of academic interest for many years. However, when CVD emerged as the leading cause of morbidity and mortality in the Western world, interest in cholesterol sharpened.

Keys then carried out a great deal of further epidemiological research, and he also performed a number of cholesterol feeding experiments in humans. He was surprised to find that, in humans, cholesterol had little or no effect on blood cholesterol levels or risk of atherosclerosis. He wrote:

The evidence — both from experiments and from field surveys — indicates that cholesterol content, per se, of all natural diets has no significant effect on either the cholesterol level or the development of atherosclerosis in man. (1)

Keys then shifted sideways from cholesterol to saturated fat in the diet, leading to the creation of the highly influential “Keys equation,” which he claimed could predict the effect of saturated and polyunsaturated fatty acids in the diet on serum cholesterol levels. (This equation uses the SI units of mmol/L, which is not used in the U.S., but the basic equation is the same.)

In 1961, Keys stated, “No other variable in the mode of life besides the fat calories in the diet is known which shows such constant relationship to the mortality rate from coronary or degenerative heart disease.” He appeared on the cover of Time magazine as “Mr. Cholesterol.”

The lack of any obvious mechanism of action did not prevent the diet-heart hypothesis from coming to dominate thinking about CVD.

It can often take decades for an idea to move from scientific acceptance to public and political recognition. However, by 1977, articles published in the lay press were including things like this:

Photos taken inside clogged city sewer pipes look nearly identical to medical photos of the blood vessels of patients who have spent a lifetime gorging on fried chicken, sausage and bacon. “It’s like your arteries,” said John Parker, environmental compliance inspector with the city’s Water and Sewer dept. “Grease builds up in there. It’s gory.” (Savannah Morning News)

It was also in 1977 that the U.S. Senate Select Committee on Nutrition and Human Needs, set up by Senator George McGovern in 1968, announced the publication of its guidelines. They contained six main goals:

Goal 4. Reduce cholesterol consumption to about 300 mg a day.

Goal 5. Reduce sugar consumption by about 40 percent to account for about 15 percent of total energy intake.

This became the basis for all the nutritional and dietary advice then followed, including the U.K.’s eatwell plate, the food pyramid in the U.S., and suchlike. The guidelines remain essentially unchanged today. The U.K. launched separate guidelines in 1983, but they were very much a carbon copy of the McGovern documents.

Shortly after this, in 1982, there was a National Cholesterol Consensus Conference. The primary conclusion was as follows:

It has been established beyond a reasonable doubt that lowering definitely elevated blood cholesterol levels (specifically, blood levels of Low-Density Lipoprotein [LDL] Cholesterol will reduce the risk of heart attacks caused by coronary heart disease.

The definition of high cholesterol was also lowered from 280 mg/dL (7.2 mmol/L) to 200 mg/dL (5.2 mmol/L). There were some dissenting voices, but most of the world had now swung behind both parts of the diet-heart hypothesis.