This 2001 review analyzes the significance of a particular lipoprotein profile, hypertriglycermidemic hyperapoB, which is strongly correlated with diabetes and heart disease risk. 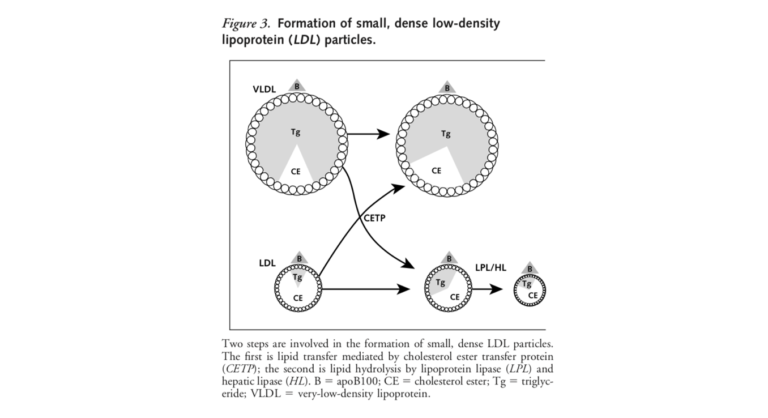 Having a large number of small, dense LDL particles is indicative of hypertriglyceridemic hyperapoB (apoB is a protein attached to each LDL particle, so a higher apoB value indicates a higher number of LDL particles). When the liver processes a higher volume of fatty acids, it excretes a larger number of VLDL particles in response, which then leads to a larger number of LDL particles and, as noted in Figure 3, the formation of smaller LDL particles. These small LDL particles are thought to be more atherogenic than larger particles for the reasons outlined in the table below — i.e., smaller particles can enter the artery and become oxidized more easily. Additionally, trials including the Quebec Cardiovascular Study have found the biological signature for small, dense LDL — higher triglycerides alongside high apoB — is more closely linked to heart disease risk than traditional markers. In fact, evidence suggests high triglyceride levels only increase heart disease risk when apoB levels are high as well.

This atherogenic lipid profile has a predictable metabolic cause. As liver fat content and insulin resistance increase, the liver produces more fat, which then is released into the blood as LDL. Consequently, this lipid profile is frequently seen in diabetic and/or insulin-resistant patients, many of whom have normal heart disease risk based on traditional markers (i.e., total and LDL cholesterol) but high risk based on this particular lipid profile analysis.

Taken as a whole, this paper convincingly argues the driver of heart disease is not all particles but small, dense LDL particles, specifically. It also argues that an increase in small, dense LDL particles is a consequence of high liver fat content and insulin resistance. This indicates dietary and lifestyle factors that increase liver fat content and insulin resistance may increase heart disease risk, even if they do not affect total or LDL cholesterol.