This review summarizes evidence and describes the mechanisms that suggest fructose specifically induces visceral adiposity through its metabolic impact, not merely its caloric value. Excessive fructose consumption leads to individuals termed TOFI, “thin on the outside, fat on the inside,” and thus individuals who are more metabolically unhealthy than their weight or BMI would indicate.

Traditionally, the leading hypothesis regarding the development of obesity involves caloric imbalance, whereby the amount of calories consumed exceeds the amount of calories burned which causes obesity. Another hypothesis for why we get fat has surfaced in the last decade, which is the idea that the overconsumption of added sugars and refined carbohydrates induce insulin resistance and high insulin levels causing obesity. While insulin is a fat-storing hormone, this hypothesis does not explain visceral adiposity, or why certain people are found to have fat stored in and around their organs. We [James J. DiNicolantonio et al.] propose a new mechanism for body fattening, particularly visceral adiposity. This hypothesis involves the overconsumption of fructose, which leads to inflammation in all cells that metabolize it rapidly. 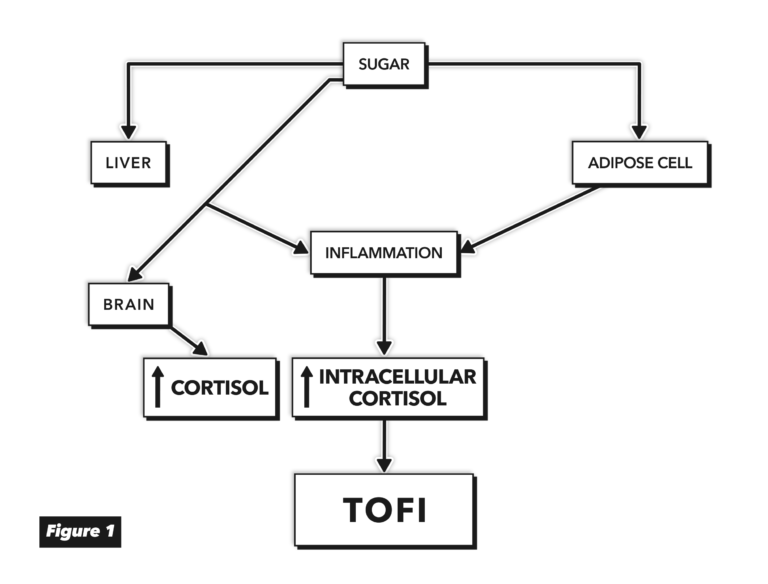 Fructose can be absorbed by a variety of tissues, including adipocytes, the kidneys, muscles, and brain. Fructose consumption, the authors argue, directly causes inflammation in the adipose tissue through multiple mechanisms, in some cases triggering vicious cycles via its impact on leptin, reactive oxygen species, and increased cellular cortisol levels. When the adipose tissue becomes insulin resistant, the flux of fatty acids out of the subcutaneous adipocytes increases. These fatty acids are deposited in the liver, which also has upregulated fatty acid production due to the intake of sucrose. Normally, these absorbed and produced fatty acids are secreted as very low-density lipoprotein (VLDL) and released into the blood. However, when the flux of fatty acids into the liver exceeds what VLDL production can remove, fat begins to deposit in the liver itself. This leads to hepatic insulin resistance and further increases VLDL production and, eventually, liver inflammation.

These and other mechanisms simultaneously drive the release of free fatty acids from subcutaneous adipocytes and their storage in the liver and other visceral tissues. Each mechanism is explored in detail in this paper. These effects, which in some cases negatively impact organ function, are all independent of any impact fructose has on overall adiposity or weight.

In summary, the authors argue fructose consumption directly triggers pathways leading to insulin resistance (especially in the liver and fat tissue), inflammation, and increased cortisol levels, which collectively make fructose specifically harmful in ways other carbohydrates are not.