This 2012 mouse trial tested the effects of fasting on the growth of various cancers and considered potential mechanisms for these effects. Fasting’s clinical significance lies in its ability to induce differential stress sensitization — that is, to simultaneously increase the susceptibility of cancer cells to chemotherapy while protecting healthy cells.

First, breast cancer cells were incubated (in vitro) in medium supplemented with serum from either fasted mice or mice fed ad libitum (i.e., able to eat as they wished). The cancer cells in serum from fasting mice proliferated more slowly and showed increased cell death when the cells were exposed to a chemotherapeutic agent. When the same test was repeated in vivo (in mice bearing subcutaneous murine breast cancer), two cycles of fasting alone were as effective as two cycles of chemo, while the combination of fasting and chemo reduced mean tumor size by 50%. Similar effects were shown when mice were instead given human breast cancer or ovarian cancer xenografts.

Mechanistically, the authors argue the beneficial impact of fasting is related to its effects on glucose and IGF-1 levels. During fasting, normal cells downregulate growth, an adaptation that reduces the level of chemotherapy-induced oxidative stress they experience. Cancer cells, conversely, show the opposite effect, increasing growth signaling and so exacerbating the impact of chemotherapy on oxidative stress and DNA damage. This was supported by in vitro tests, which showed serum low in glucose and IGF-1 reduced cancer cell growth and increased sensitivity to chemotherapy, while adding IGF-1 to fasted mouse serum protected tumor cells from chemotherapy’s effects. 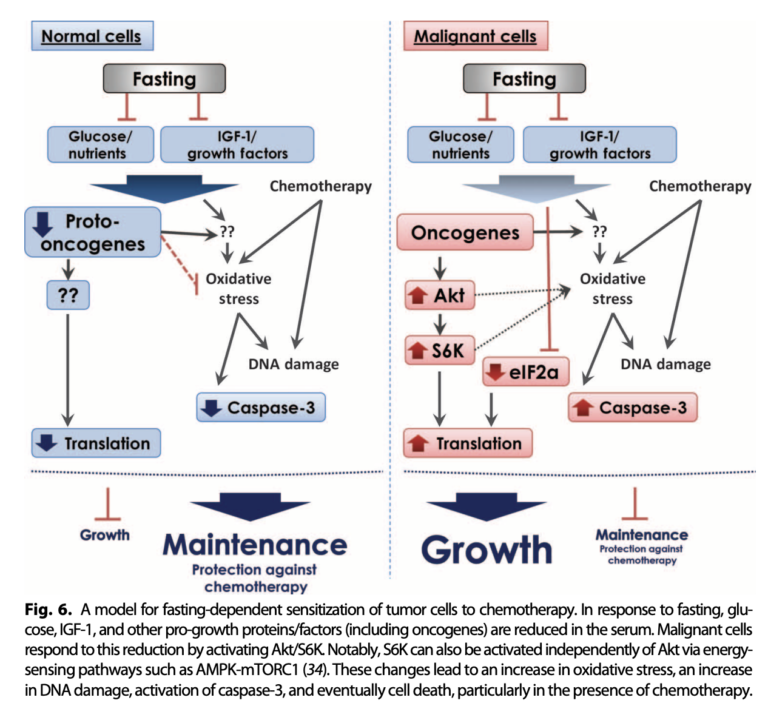 In summary, this trial showed that in mice, fasting increases the sensitivity of tumors to chemotherapy and so may increase the effectiveness of chemotherapeutic agents. These effects are likely related to the impact of fasting on blood glucose levels and/or IGF-1.

The authors noted multiple clinical trials testing this hypothesis in humans. One that has since been published showed fasting is well tolerated and appears to improve quality of life during chemotherapy. One is ongoing. A third was completed in late 2018, but results have not been published.

Fasting, the authors note, differs markedly from broad caloric restriction with regard to the observed effects. The beneficial effects of fasting seem to be related to its impact on glucose and IGF-1 levels (or mechanisms closely related to these biomarkers). Fasting leads to substantial reductions in both blood glucose and IGF-1 within two to four days, without weight loss; conversely, 20 to 40% caloric restriction requires weeks to months to have a similar effect (and even then, only when protein is restricted as well) and necessarily induces weight loss in the process.