Fifty-three overweight or obese, insulin-resistant subjects were randomized to one of three dietary patterns. The ADF group alternated between “fast” days and “feast” days; during the weight-loss period, they were instructed to consume 25% and 125% of energy expenditure, respectively, and during the weight-maintenance period, 50% and 150%. The CR group consumed the same number of calories on all days — 75% and 100% in the weight-loss and weight-maintenance phases, respectively. Thus, total prescribed calories were the same between the two groups.

Study staff prepared and provided all meals for the first three months of the study. Subjects received nutritional counseling for the remaining time.

As shown in Figure 2 below, both groups lost similar amounts of weight: 8-10% over the first six months, with some regain over the remaining six months. The diets also led to similar changes in BMI and fat mass. 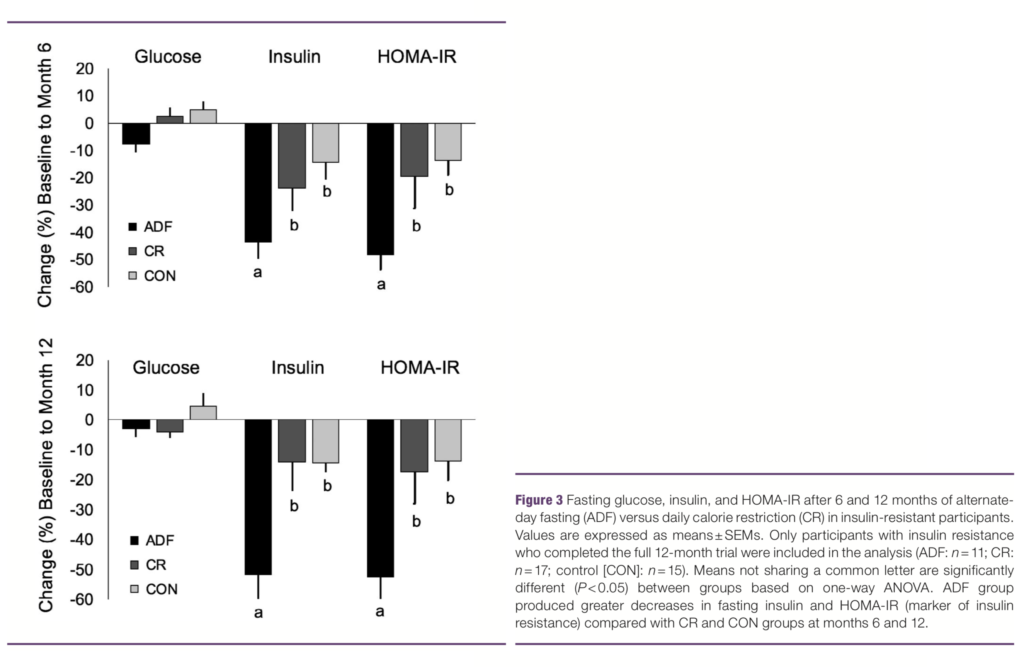 The changes associated with ADF were seen despite poor compliance with the diet. During the weight-loss phase, ADF subjects were instructed to consume 399 calories per day but actually consumed 1,049 on average; during the weight-maintenance phase, they actually consumed 1,175 on a prescription of 799. This suggests compliance with ADF may be challenging, an observation reinforced by the fact that six out of 17 ADF subjects dropped out before completing the 12-month diet. It also indicates, however, that less severe caloric restriction — down to only 50% of energy expenditure — is sufficient to drive significant metabolic improvements.

This small study demonstrates that periodic, severe caloric restriction induces greater metabolic improvements than continuous, moderate caloric restriction, despite causing similar weight loss. In other words, it indicates fasting has unique metabolic benefits. Future research could contribute to a more precise understanding of the benefits of fasting by answering some of the following questions:

Addressing these and other questions will help develop an understanding of how fasting can be best applied toward specific outcomes. The current data alone suggests fasting deserves serious consideration as an alternative to conventional weight-loss prescriptions.