An understanding of the validity of science and scientific criticism, whether about cosmology, or climatology, or physiology and the efficacy of CrossFit, requires knowledge of the terms conjecture, hypothesis, theory, and law.

Be aware, now, consensus on the meaning of these terms is fading. … In common use, scientists speak at once of probability theory and the laws of probability. Scientifically credentialed individuals advance unvalidated models by proclaiming a consensus. It’s an infection like university grade inflation. Nevertheless, here is a guideline that will improve your science literacy; give you a framework for evaluating all variety of supposedly objective or scientific claims, arguments, and models; and hold you in good stead with real scientists.

Science is all about models of the real world, whether natural (basic science) or manmade (applied science, or technology). These models are not discovered in nature, for nature has no numbers, no coordinate systems, no parameters, no equations, no logic, no predictions, neither linearity nor non-linearity, nor many of the other attributes of science. Models are man’s creations, written in the languages of science: natural language, logic, and mathematics. They are built upon the structure of a specified factual domain. The models are generally appreciated, if not actually graded, in four levels:

A conjecture is an incomplete model, or an analogy to another domain. Here are some examples of candidates for the designation:

A hypothesis is a model based on all data in its specified domain, with no counterexample, and incorporating a novel prediction yet to be validated by facts. Candidates:

A theory is a hypothesis with at least one nontrivial validating datum. Candidates:

A law is a theory that has received validation in all possible ramifications, and to known levels of accuracy. Candidates:

Each of these candidates can stir arguments worthy of a paper, if not a book, and no model is secure in its position. Weak scientists will strengthen their beliefs and stances by promoting their models while demoting the competition. Some familiar models fail even to be ranked because they are beyond science, usually for want of facts. Candidates: 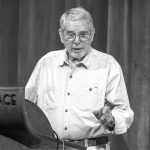 Jeff Glassman has a B.S., M.S., and Ph.D. from the UCLA Engineering Department of Systems Science, specializing in electronics, applied mathematics, applied physics, and communication and information theory. For more than half of his three decades at Hughes Aircraft Company, he was division chief scientist for Missile Development and Microelectronics Systems. Since retiring from Hughes, he has consulted in various high-tech fields. He is the author of the book “Evolution in Science: California Dreaming to American Awakening” (1992).

He has also worked as a bush pilot for Alaska Helicopters and was a naval aviator in helicopters and single- and multiengine aircraft, instructor pilot, and maintenance test pilot, making lieutenant commander in the reserves before resigning with a total of 12 years.