Nonalcoholic fatty liver disease (NAFLD) is the result of the net flux of fat into the liver exceeding the total excreted and burned by the liver. There are three major sources of liver fat uptake:

As noted elsewhere on CrossFit.com, DNL is primarily governed by dietary carbohydrate intake, and especially by added sugar intake. Previous research has suggested that around 60% of the fat in the livers of subjects with NAFLD is derived from circulating fatty acids, with 25% derived from DNL (1). 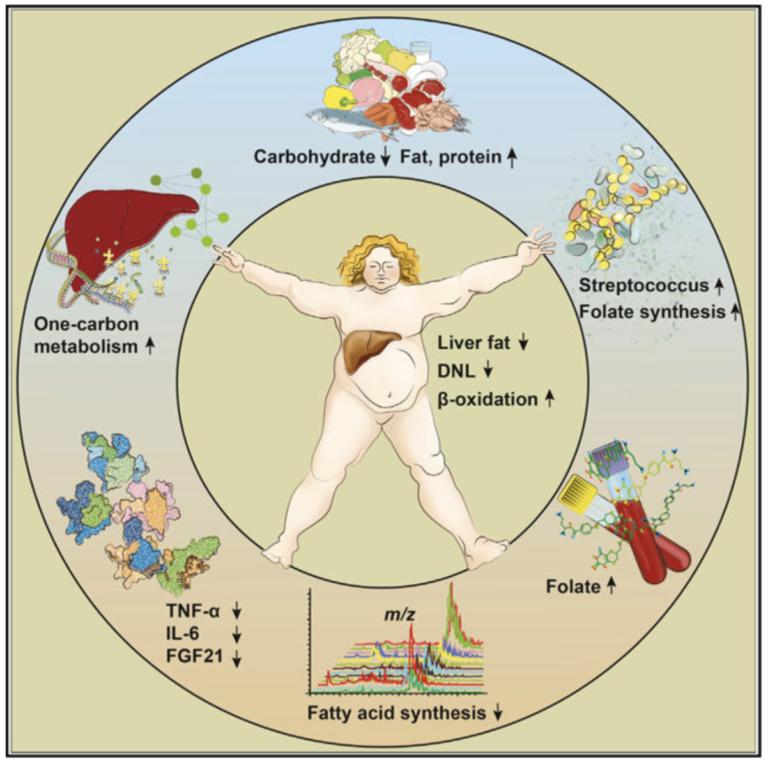 Seventeen overweight or obese subjects were placed on a very low-carb diet (4% of calories from carbohydrate) for 14 days. Subjects were provided all their food, prepared in a metabolic kitchen and delivered in refrigerated crates twice weekly, for the duration of the study. The number of calories in each subject’s diet was set to maintain a stable body weight (the average diet contained 3,115 calories). Subjects spoke with dietitians daily, and if they began to lose weight, they were given an additional 200 calories per day in macadamia nuts. Despite these efforts to ensure body weight stability, subjects lost an average of 1.8% of their initial body weight over 14 days.

The low-carb diet drove rapid and dramatic decreases in liver fat content. Liver fat content decreased an average of 43.8% over 14 days, with all subjects showing some loss of liver fat and significant visible changes after the first day on the low-carb diet. This reduction was associated with a 79.8% reduction in hepatic DNL and a significant increase in hepatic beta oxidation (the burning of fat by the liver). There was no change in circulating plasma fatty acids (NEFA). Liver function improved, as measured by multiple biomarkers of liver health.

Alongside these decreases in liver fat, researchers observed significant reductions in multiple inflammatory markers (IL-6, TNF-a) and FGF-21. The diet also led to rapid changes in the composition of subjects’ gut biomes, which increased serum folate levels (due to increased folate production in the gut). These changes correlated with the reductions in liver fat content.

This study demonstrates severe carbohydrate restriction leads to rapid and dramatic improvements in liver fat content in subjects with NAFLD, mediated by a reduction in fat production alongside an increase in fat oxidation. These changes were sufficient to roughly halve the amount of fat in subjects’ livers in 14 days, without any deliberate caloric restriction and alongside only minor weight loss. These results are consistent with previous studies indicating carbohydrate and/or added sugar restriction leads to rapid improvements in liver fat content and liver function in subjects with NAFLD (3). Clinically, this indicates carbohydrate restriction alone is sufficient to improve NAFLD; mechanistically, it suggests changes in hepatic DNL and liver fat oxidation, both closely associated with carbohydrate intake, may play a larger role in NAFLD pathology than previously indicated.