There is much evidence that the cholesterol campaign may be a main cause of the crises in the health-care systems in many countries; not only because of the obesity and diabetes epidemics that started shortly after American authorities, without any scientific support, had introduced the high-carb, low-fat diet in the early eighties, but also because millions of patients and healthy people all over the world have been prescribed a drug with minimal benefit, if any at all, and with many serious side effects.

Ravnskov and David Diamond, along with 14 other international experts, recently published a review of the falsifications of the cholesterol hypothesis in Expert Review of Clinical Pharmacology. According to Taylor & Francis, which publishes more than a hundred scientific journals, more than 10,000 open access papers were published in 2018. Ravnskov and Diamond’s paper is at the top of their list of the 10 most downloaded papers.

Hitherto, the paper has not been commented upon in any of the major medical journals. Instead, editors of Circulation write that they, together with the editors of 16 other cardiology journals, have published an article in which they claim that the benefits of statin treatment have been proven by “robust scientific advances, published in the pages of our journals, [that] have fostered significant improvements that benefit individuals and society.”

The authors of the Circulation article are dissatisfied because their “prodigious tool chest” has been questioned by “medical misinformation hyped through the internet, television, chat rooms, and social media.” Yet, it is highly unlikely that the editors of 17 major cardiologic journals would not have observed a paper that today has been downloaded by more than 70,000 readers.

“By coincidence,” the Cholesterol Treatment Trialists’ (CTT) Collaboration has published an article in the current issue of The Lancet entitled “Efficacy and safety of statin therapy in older people: a meta-analysis of individual participant data from 28 randomised controlled trials.” Here, the CTT authors suggest that up to 8,000 lives can be saved annually in the U.K. if everyone over the age of 75 receives statin therapy. CTT previously published a 2010 Lancet paper touting the “Efficacy and safety of more intensive lowering of LDL cholesterol: a meta-analysis of data from 170 000 participants in 26 randomised trials,” and notably, the present article is largely a rehash of old data that is not available to anyone else for verification.

As many cardiovascular events may heal with minimal sequels or none at all, mortality is a more important outcome. In the recent CTT paper, the authors claim that statin therapy resulted in a 12% reduction of coronary mortality. However, according to Webfigure 6b in the appendix (a section that very few read), the reduction of all-cause mortality was only 0.2% per year in trials that excluded patients with heart failure or dialysis. In Webfigure 6, the total number of deaths per year among the oldest was 850 (4.1%) in the statin groups and 869 (4.3%) in the control/less groups. This means that the number of participants in each group must have been 19,767 and 20,209, respectively, and the total number 49,834. Thus, as the difference between the two groups was only 19 deaths, you would have to treat 1,040 patients for a year to prevent one death. 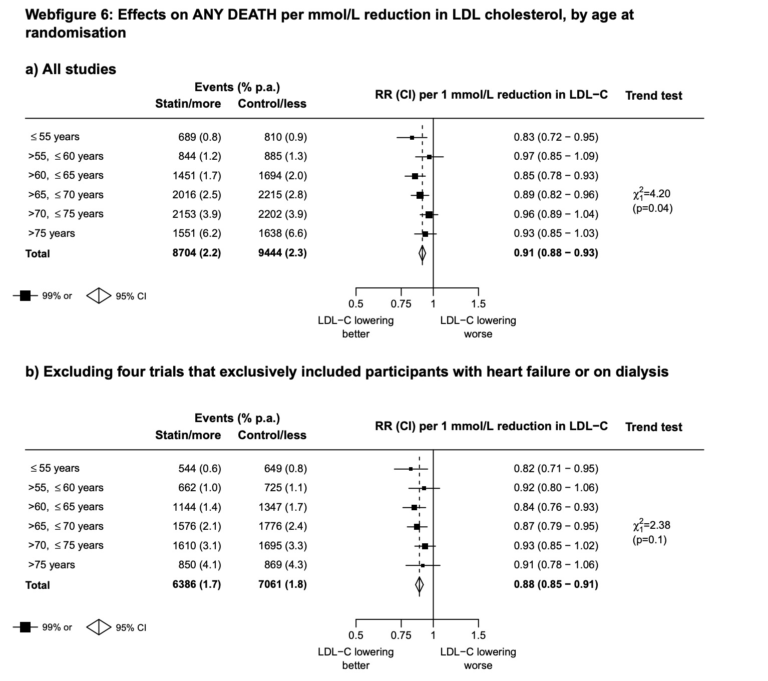 The number of patients who may suffer from serious side effects is debatable. According to the statin reports, this number is less than 0.1%, but this is highly doubtful because in most statin trials, the authors have excluded those who suffered from side effects in a short run-in period before the trial started. Many independent authors have documented much higher numbers, and in the IDEAL trial, where a low statin dose was compared with a high dose and no run-in period was included, almost 50% in each group suffered from serious side effects. This is not mentioned in the abstract or the text, only in a table (Table 4). Furthermore, when you download this paper, the tables are not included.

There are five Figures in the paper. The only one that looked at deaths was Figure 5. It reported that the rate ratio (RR) for statins (achieving a 1 mmol/l reduction in LDL) vs. the control group in the over 75s was 0.95 (95% CI 0.83–1.07). That includes the line of no effect (1.0) and thus could have happened by chance and thus was not statistically significant. Interestingly the result for the age group 70-75 was also not statistically significant. Neither of these can be reported as a finding therefore.

The CTT personnel even re-calculated the RRs after leaving out four trials where “statin therapy had not been shown to be effective.” Yes – really – ponder on that for a second. Even leaving out four trials that didn’t show support for statins, they still could not achieve a statistically significant result in the over 75 age group.

All the reports in the media that “up to 8,000 lives a year could be saved,” with reference to over 75s (or over 70s without the fudge) are false.

And Dr. Malcolm Kendrick provides an overview of the significant CTT conflicts of interest and further analysis of “serious adverse events” in the context of statin users here. 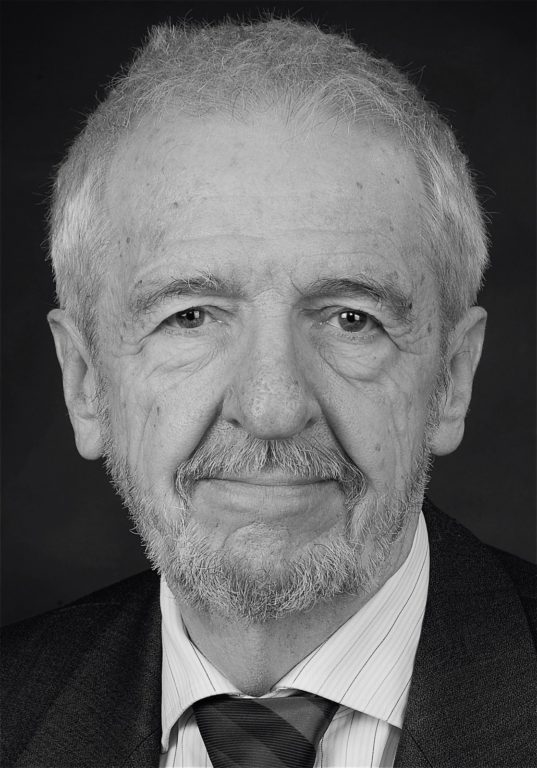 Uffe Ravnskov was born in Copenhagen, Denmark, and received his medical doctorate from the University of Copenhagen in 1961. Over the following seven years, he worked at various surgical, roentgenological, neurological, pediatric, and medical departments in Denmark and Sweden. He then began scientific studies at the Departments of Nephrology and Clinical Chemistry at the Lund University Hospital in Lund, Sweden. He was awarded his doctorate of philosophy (specializing in internal medicine and nephrology) there in 1973, and was assistant professor at the university’s Department of Nephrology from 1975 to 1979. From 1979 he has been an independent researcher with no university affiliation.

Ravnskov’s reexamination of data from past scientific studies led him to the conclusion that the scientific foundations of the diet-heart hypothesis were scientifically flawed. His book Kolesterolmyten (“The Cholesterol Myths”) was subsequently published in Sweden in 1991 and in Finland in 1992. In 1997, he published selected sections of The Cholesterol Myths on the worldwide web. According to the search engine Direct Hit, his website soon became ranked as one of the top 10 most popular websites about cholesterol. As a result of this interest, his book was translated into English and published in the United States as The Cholesterol Myths: Exposing the Fallacy that Saturated Fat and Cholesterol Cause Heart Disease in September 2000. It was later published in Germany in 2002 under the title Mythos Cholesterin. Die zehn größten Irrtümer.

Since 1990, Ravnskov has published over 80 scientific papers critical of the diet-heart hypothesis. He was the first to suggest that the positive effect of statins may be due to other effects than cholesterol-lowering.

Ravnskov has received the Skrabanek Award in 1999 from Trinity College, Dublin, Ireland, for original contributions in the field of medical skepticism. He is a member of the free panel of the Journal of the Swedish Medical Association (the medical journal Läkartidningen), the International Science Oversight Board, the International Society for the Study of Fatty Acids and Lipids, and is the spokesman for THINCS, The International Network of Cholesterol Skeptics.