Chronic kidney disease of unknown origin (CKDu) is responsible for the deaths of at least 20,000 Nicaraguan sugarcane workers and afflicts thousands of laborers in Brazil, El Salvador, Egypt, India, Qatar, and Sri Lanka, as well. And this disease is spreading to the U.S.—as Bloomberg published last year, “hospitals in the U.S. are reporting a sharp increase in patients whose symptoms are consistent with the disease.” In one study, one-third of participating Florida agricultural workers suffered from acute kidney injury.

From Nicaragua to Miami, cases of chronic kidney disease of unknown origin (CKDu) share a common setting: sites where agricultural work takes place in severe heat. Independent research on the cause of CKDu points to chemicals used in sugarcane agriculture, the physiological response to intensive work in the heat, and the sugary beverages commonly consumed by laborers. But researchers receiving millions in funds from the Centers for Disease Control and Prevention, the National Institutes of Health, and the Central American sugar industry have failed to discover the disease’s cause—or investigate some of the leading suspects.

Research directed by nephrologist Dr. Richard Johnson of the University of Colorado suggests that a combination of heat stress, dehydration, and sugar-sweetened beverages is toxic to the kidneys. 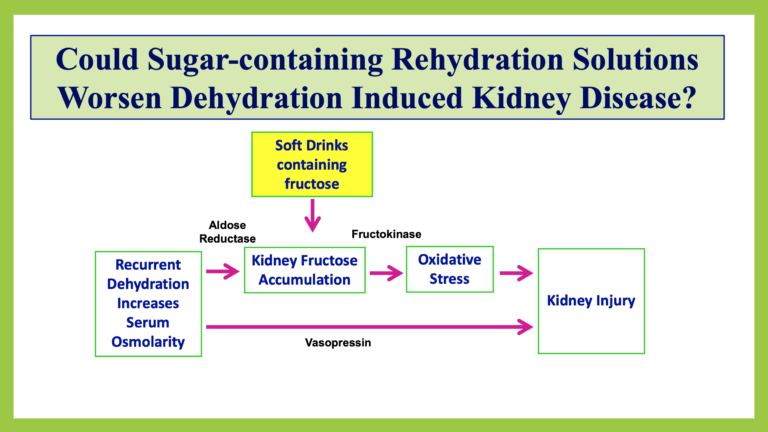 From “Mesoamerican Nephropathy: A CKD of unknown etiology in Central America,” a presentation by Carlos A. Roncal-Jiménez, University of Colorado

New research, such as “Soft Drink Consumption During and Following Exercise in the Heat Elevates Biomarkers of Acute Kidney Injury,” has been consistent with Dr. Johnson’s theory. And the new evidence from human subjects is significant because much of Johnson’s work heretofore has focused on animal rather than human testing. (Also significant: Mountain Dew, the beverage used in this study, is produced by PepsiCo, a company that has explicitly marketed hyper-consumption of its sugar-sweetened beverages to people exercising for extended periods of time in the heat.)

The U.S. CDC is the government agency responsible for preventing the spread of epidemics in the United States. In fact, the CDC has been investigating the CKDu problem since at least 2014. Why, then, does this epidemic’s origin remain unknown, even as it has started affecting Americans?

One potential answer lies within the CDC’s partnership with the sugar industry to lead the CKDu investigation. Instead of going through an open bidding process, Boston University researchers with a history of sugar industry funding “approached the CDC with a proposal, and funding was then obtained from the sugar industry.” In 2014, the Central American sugar industry funneled $1.7 million through the CDC’s own foundation. Contrary to federal law, the CDC Foundation’s 2014 annual report failed to list the restrictions or amount of one industry gift (“Los Azucareros del Istmo Centroamericano”) and completely omitted a $675,000 payment from the National Committee of Sugar Producers of Nicaragua—the 2015 report did list a payment from NCSPN but did not include its amount or restrictions, despite federal law requiring the foundation to disclose this information.

This pattern of inconclusive “research” is similar to the industry-funded alcohol study canceled by the National Institutes of Health after industry-researcher communications came to light and the NIH accused its own officials of “steering funding to a pre-selected investigator.”

Yet the sugar industry’s ongoing sponsorship of this research stands out even among the many NIH and CDC partnerships with corporations that represent conflicts of interest. The sugar industry has a strong incentive to downplay at least three of the suspected causes of CKDu. Can one imagine the sugar industry acknowledging that sugar-sweetened beverages are a cause of CKDu? Or blaming illness on the herbicides used by industry laborers (glyphosate, to be specific)? And what of the intense working conditions the industry imposes on its workers?

Research clearly implicating any one of those factors could imply massive corporate liability resulting from culpability in the deaths of thousands of laborers around the world. On the other hand, ambiguous research that called for further study would prevent any such corporate liability, even as it ensured the continued flow of research funding to the so-called guardians of public health.

We are fully convinced that there is no direct relationship between CKD and the activities conducted in the sugarcane industry.

Meanwhile, the industry-funded research team chose not to measure exposure to sugar-sweetened beverages, nor to glyphosate or other agrichemicals. Instead, researchers have focused on heat stress and dehydration. Of course, it makes sense to consider these additional factors: Even in Dr. Johnson’s fructose-oriented model, heat and dehydration play major roles. However, it is not possible to ascertain whether heat and dehydration cause the illness or merely precipitate it by magnifying the impact of toxins—unless investigators evaluate subject exposure to those toxins.

Sugar industry-funded lead investigator Daniel Brooks writes, “It is possible that individuals in regions with a CKD (Chronic Kidney Disease) excess also are exposed to other nephrotoxic factor(s) present in these particular locations, which could be potentiated in a setting in which individuals have been rendered more susceptible to kidney disease due to heat stress.” However, a look at Brooks’ research history does not reveal a disposure to conducting experiments that specifically measure these nephrotoxic factors (this despite the fact that a Brooks study found elevated rates of uric acid in the population suffering from kidney problems, a result consistent with Johnson’s fructose hypothesis).

Moreover, Brooks’ industry-funded research claimed that consuming “electrolyte solutions during the workday may be protective against renal damage.” Brooks did not mention whether these electrolyte solutions contained fructose, but Johnson’s research team suggests they do, asking, “Could sugar-containing rehydration solutions worsen dehydration induced kidney disease?” Indeed, Brooks noted that his industry-funded finding “contrasts with a recent study that found electrolyte solution consumption during the workday to be harmful for renal function.” Notably, the authors of the recent study Brooks cites here did not call the packets sugarcane farms distributed to workers “electrolyte solutions” as Brooks did. Rather, its authors called them “sugary rehydration packets.” The study’s results, consistent with Johnson’s hypothesis, suggested that the epidemic “may be associated instead with occupational exposure to heat stress in conjunction with pesticide inhalation, sugarcane chewing and sugar intake during the workday.” (One Johnson study found these packets correlated with lower cases of kidney injury but also found a much higher rate of kidney injury among sugarcane-cutting workers, the group that has the highest fructose consumption due to the distribution of sugary rehydration packets and chronic sugarcane chewing.)

In conclusion: Sugar industry-funded research appears to find that sugar-electrolyte solutions prevent CKDu, but independent research points to such sugar intake as a cause of the illness. Would one expect the industry to keep paying for research that found it was inadvertently killing its workers with its own product?

If this comparison of industry-funded vs. independent research reminds you of industry-funded research on obesity and diabetes, it should. If you recall: “When the studies were led by independent researchers, they showed a clear link between soda consumption and obesity or metabolic disease. But notably, 26 of the studies reported no link between sugary soft drinks and poor health. What was different about the studies that found no connection to health problems? They were all carried out by researchers with financial ties to the beverage industry.”

The sugar-funded Boston University researchers have studied the CKDu epidemic for over a decade. In 2017, Boston University announced new grants to continue the research team’s work in the amount of a combined $4.4 million from the NIH and the Central American sugar industry. Despite millions in government and industry funding, the CKDu investigators’ most recent published work confirms that they still haven’t found a cause. If their funders are lucky, they’ll never find it.