CrossFit, Inc. continues its efforts to expose the corruption that compromises America’s public health agencies. Last year, CrossFit exposed the Centers for Disease Control (CDC) Foundation and the Foundation for the National Institutes of Health (NIH) for neglecting to disclose money they received from Coca-Cola and Pepsi. Congress took action and told the foundations to stop the “anonymous” listings and abide by the law, which requires full funding transparency. The NIH and CDC’s foundations ignored Congress and continued to hide this information.

These foundations, despite their agency affiliation, and despite being founded and funded by Congress, are not subject to the Freedom of Information Act (FOIA), a law that requires executive department agencies to produce certain information when requested by interested parties. However, the foundations’ affiliated agencies, the CDC and the NIH, are subject to the FOIA. CrossFit submitted FOIA requests to the CDC and NIH in order to access both foundations’ full donor reports, but the CDC and NIH delayed. Left with no alternative, CrossFit sued the Department of Health and Human Services (HHS) to compel them to comply with the FOIA request and release any donor list-related internal communications.

The CDC released internal communications, at least initially. After noticing the information it produced included incriminating and embarrassing emails, however, HHS attorneys tried to retroactively redact the content of those emails, spuriously claiming attorney-client privilege applied to a conversation that preceded the involvement of any attorneys. CrossFit challenged this redaction and HHS’s absurd excuse for it. HHS then backed down and no longer contests the release of the CDC’s damning correspondence.

Here, then, is what HHS tried to claw back:

On the afternoon of Nov. 6, 2015, the CDC’s liaison to the CDC Foundation, Andrea Anason, noticed the Congressional authorization for the CDC Foundation requires the foundation to produce an annual donor report and make it public. In her words:

If I’m reading this correctly, it seems like they should be producing a report each year with the details of each donor and amount, and that report should be available to the public and Congress (even if they don’t push it out). Given that, it’s probably not a far stretch for CDC or them to post it on the web. 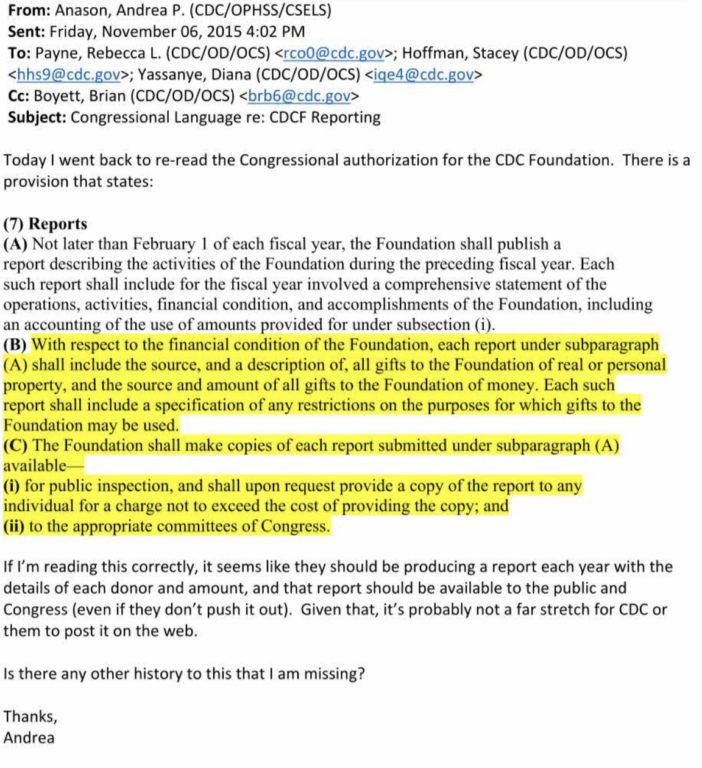 Anason is right — the foundation should be producing a report each year with the details of each donor and amount, this report should be available to the public, and it’s not a far stretch to post it on the web.

I wonder if their annual reports or audits, like in 2013, cover the requirement below or if [sic] the intent of the language. So, how detailed does the ‘source and description of all gifts’ are they supposed to get? Donor by donor? Or can they skate by with types and amounts of contributions lumped together and then a general list of contributors, like they have now. 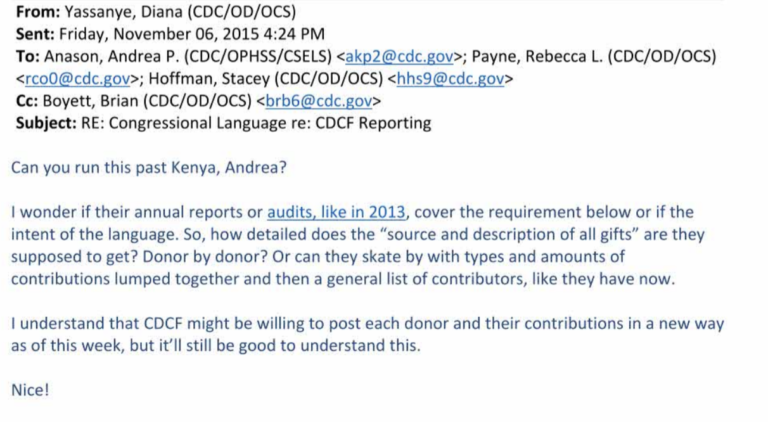 The CDC’s official in charge of public-private partnerships wondered whether the CDC’s affiliated nonprofit could “skate by” on its transparency reports by lumping contributions together and not delineating which donor contributed what, as the law requires. In effect, the CDC official asked whether the CDC Foundation can launder contributions it receives in order to mislead the public. This constitutes a massive conflict of interest.

In its FY 2015 report, the CDC Foundation received funds from Coca-Cola, the PepsiCo Foundation, Johnson & Johnson, Amgen, Pfizer, and a host of other companies in the food, beverage, and pharmaceutical industries. They have donated millions of dollars to the CDC Foundation, likely at least in part in order to influence its guidelines and activities. There’s no reason why all Americans should not know why these companies are donating to the CDC through the CDC Foundation.

This should not come as a surprise. At least one CDC researcher has described the CDC Foundation as a “professional money-laundering facility,” and it is increasingly clear that the organization turns food/beverage and pharmaceutical industry dollars into information and recommendations favorable to those industries, all with the federal government’s seal of approval.

Conflicts of interest are endemic, and these emails stand as evidence that the CDC prioritizes industry partnerships over its charter to protect and inform the American public. They demonstrate yet another way in which the CDC and its parent agency, HHS, have simultaneously failed to address the chronic disease epidemic.