The world’s first major dietary guidelines were published in 1977 in the U.S. and were primarily designed to help prevent cardiovascular disease (CVD). Gerald Oppenheimer and I. Daniel Benrubi described this as an “extraordinary act”:

[E]nough of a consensus existed among cardiovascular epidemiologists and nutritionists and within the American Heart Association that the important Senate Select Committee on Nutrition and Human Needs (hereafter, “the committee”) used the diet-heart association to perform an extraordinary act: advocate dietary goals for the American population. This was “the first comprehensive statement by any branch of the Federal Government on risk factors [for chronic disease] in the American diet.” (1, my emphasis)

A first important question to answer is whether the guidelines have had the hoped for effect on the consumption of different dietary macronutrients. The available data suggest this had been the case, as outlined in the paper “Statistical Review of U.S. Macronutrient Consumption Data, 1965–2011”:

The question that follows from this is whether these changes resulted in a positive or negative effect on health, specifically heart disease/cardiovascular disease. It is difficult to answer this question with absolute certainty. Over a period of several decades, many different factors other than the intake of various macronutrients have changed significantly.

For example, in the U.S., the rate of cigarette smoking has decreased considerably, from 42% in 1965 to 14% today (3). The rate of smoking has also fallen in most other Western countries during the same time period.

In addition, air pollution has improved, and air pollution is a major risk factor for cardiovascular and cardiorespiratory diseases (4).

Another factor is the removal of lead from fuel. In the U.S. alone, around 200,000 tons of lead entered the atmosphere each year from car exhaust. Studies have suggested that low-level lead poisoning may have caused as many deaths from cardiovascular disease as smoking:

New estimates suggest that 256,000 premature deaths from cardiovascular disease — including 185,000 deaths from ischemic heart disease — in the United States may be linked to historical lead exposure in middle-aged and older adults (people currently aged 44 years or over). (5)

Running parallel to the reduced exposure to several harmful agents, there have been many advances in medical treatments that have reduced the mortality from heart disease. For example, the death rate from heart attacks with hospital admission has gone down from around 40% to 8%.

All of this means the mortality rate from cardiovascular disease and, specifically, coronary heart disease, has been decreasing steadily in the U.S. for many years, starting in the early 1960s.

Clearly, this fall began many years before the dietary guidelines were introduced and has continued since (Figure 1). The rate of decrease appears to have been unaffected by the 1977 guidelines. More recently, the decline has leveled off (6).

In fact, the long-term improvement in CVD mortality has not only come to a halt, it may be reversing. In the U.K., deaths from heart disease increased in 2018 and mainly have been attributed to increases in obesity and diabetes. A similar trend has also been noted in the U.S., where the rate of diabetes has increased significantly (8).

It is difficult to disentangle causality when so many variables are changing simultaneously. However, it seems likely that the epidemic of obesity and diabetes is now negatively impacting the other positive factors that have led to previous long-term improvements (9).

This raises the question, can it be established whether the changes in dietary intake have been a significant factor in the rise in obesity and diabetes in the U.S. and other Westernized countries? It is certainly true that there has been an increase in carbohydrate consumption (Figure 2), and several researchers have suggested this may have been a factor in driving an increase in both obesity and diabetes. 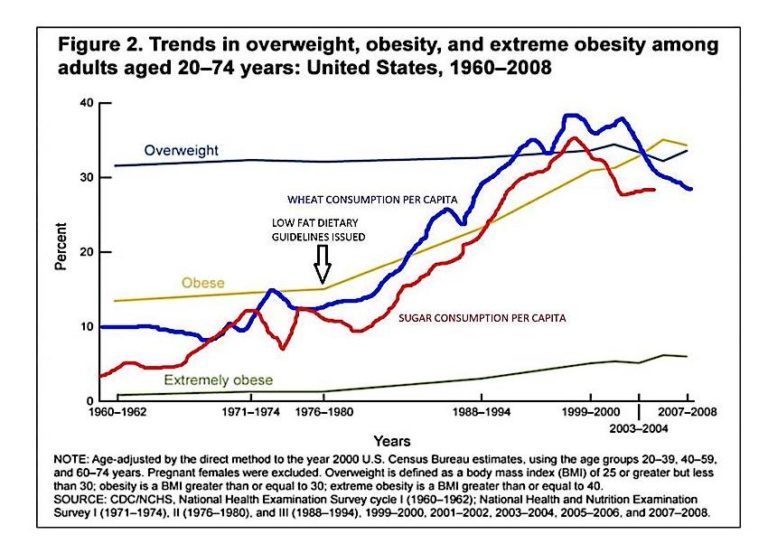 The suggestion here is that, while the dietary guidelines led to the hoped for increase in carbohydrate consumption along with a relative reduction in fat consumption, this may have led to an increase in obesity and diabetes, which in turn has led to recent increases in the rate of CVD.

It could therefore be argued that the dietary guidelines have, at least in part, been damaging rather than beneficial. It is possible they could be behind the rise in obesity and diabetes in the U.S. and many other countries, which in turn is an important causal factor in the recent reversal in long-term improvements in morbidity and mortality from CVD. To put it more starkly, a strong possibility exists that the dietary guidelines have increased rather than reduced the risk of CVD.